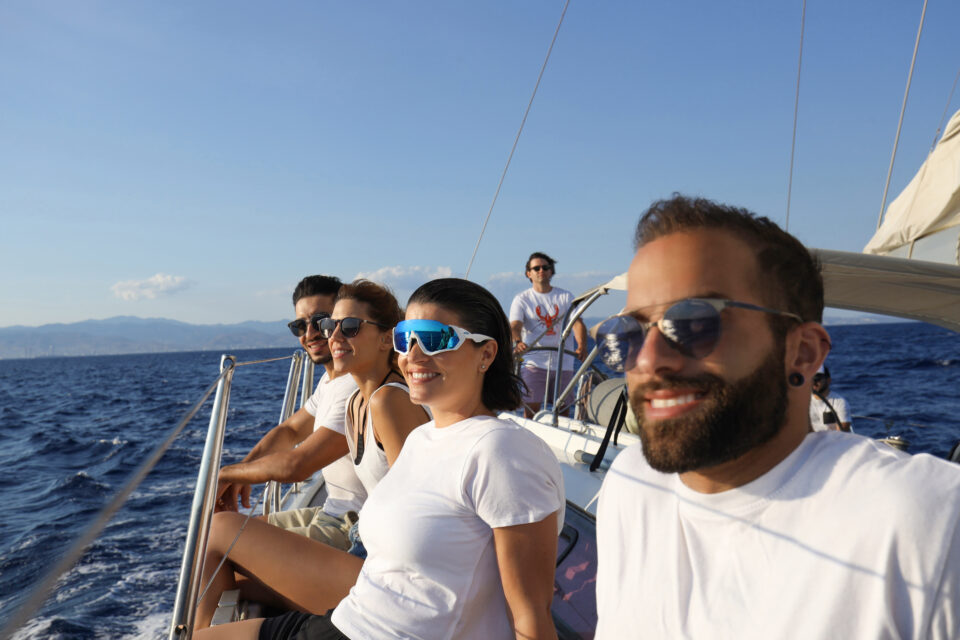 A woman sitting on the International Olympic Committee plans on taking a bicommunal group of youngsters around the island’s coast next year to promote togetherness through sport. Alix Norman meets her

We’re talking via Skype: white-hot Cyprus summer to early Alpine autumn. Behind Sophia, lavender peaks fade towards a rich blue sky; a river rushes through the grove of trees where she stands. Our interviewee is not oblivious to her surroundings – in fact, she’s revelling in the chance of a rare day off and a hike in the wilds. Because life for this 32-year-old doctor, former Olympian and International Olympic Committee Young Leader, is incredibly busy.

“Anything I get to do outside is a chance to recharge my batteries,” she smiles. “I love the water and I love the mountains, so getting a rest day in the Alps is a real pleasure.”

Sophia Papamichalopoulos Oly has been on the go practically since birth. Currently practising as a doctor in Switzerland, she was born in Athens; she’s been skiing from the age of four and sailed ever since she can remember. “I grew up in a house opposite the Larnaca Sailing Club,” she reveals. “So sports were in my blood – especially sailing. It’s part of the reason for Winds of Change: I want to give back to the next generation the empowerment, drive, and dedication that sports gave me.”

“I’ve spent almost my entire life involved in sport,” says Sophia, “and I truly believe in its power to change people’s lives. By training and working together as one sporting team, by sailing around the whole island and stopping en route to engage with different communities, I’m hoping we can contribute to peace and conflict prevention from the ground up.”

Sailing may always been a big part of Sophia’s life but the picture wasn’t all rosy: “By the time I was 14, I was the island’s female under-16 sailing champion, and one of the top five youth sailors – both male and female – in Cyprus. So I couldn’t wait to take part in the Youth Team international races, and travel to foreign places to represent my country,” she smiles.

Sadly, this was not to be. “I was the first girl in the youth division ever to make it to the top five overall. But I was left out of the National Team in favour of the sixth-placed sailor, a boy. I wasn’t even informed I’d been cut; it was most disappointing.”

In light of this, Sophia decided to dedicate more time to her other passion: skiing. “I realised I wasn’t going to get anywhere if they kept choosing boys over girls, and thought maybe skiing would be less biased,” she explains. “After all, I’d been skiing for the Cyprus Under-16s since the age of 14, and had already represented Cyprus in several international competitions.”

Although skiers from Cyprus are often considered “exotic outsiders on the international circuit; I mean we come from an island known for its sun and sea!” the young sportswoman forged ahead, qualifying for the European Youth Olympics (where she made the top 25), and then for the 2010 Winter Olympics in Vancouver.

“I was training all year round, six days a week – mostly on the glaciers of Austria. I was fortunate to have a great deal of support from the Austrian Ski Federation; the Cyprus Federation, not so much,” she grimaces. “You could say zero support in fact. But I still made it to the 2010 Olympics, competing in the Women’s Slalom and Giant Slalom and taking 53rd and 55th position for Cyprus out of roughly 100 other contestants!”

Vancouver was Sophia’s only Olympics, and she was the last female skier from Cyprus to race in the Winter Games. “I would have loved to return in 2014 or 2018,” she adds, “but there’s no such thing as a professional full-time skier in Cyprus; you have to support yourself, you have to pay the bills. I needed a full-time job.”

Today, Sophia has parlayed the resilience, discipline, and dedication she learnt in sport into a medical career. But sport is still an important part of her life, and she hopes her own experiences will benefit the next generation, especially those of her own nation.

“At 16, I’d been on a bicommunal Fulbright camp in Illinois: a powerful, eye-opening experience. It made me realise how little I knew about the Turkish Cypriot community, and yet how much we had in common. And ever since then, I’d felt that if we could just bring the different communities together, allow for interaction, we could make a real difference.”

Sport was the ideal vehicle for this peace-building process, and in 2020 – on the strength of her idea for Winds of Change – Sophia became the first ever Cypriot to become part of the new IOC Young Leaders programme. A bicommunal sailing project supported and funded by the IOC, Yunus Sports Hub and Panasonic, it’s a ground-up venture that will bring young Greek Cypriot and Turkish Cypriots together through a month of training activities, a 10-day circumnavigation of the island.

“Through sport, I’ve been fortunate to meet people from all nations,” says Sophia. “I’ve learnt we’re all driven by the same things, we all just want to connect and find peace in our lives. That’s something I want to pass on. My sporting career may have been one of both successes and setbacks, but it instilled in me the values of friendship, respect and teamwork; it taught me to fail gracefully and yet keep going. To keep giving back, no matter the circumstances – especially to my island home.

“Granted,” she adds, “Winds of Change is a huge undertaking. I haven’t had a proper holiday in years, and this new venture means I’ll have even fewer days off in the future. But if anything I do helps give back to the world, then it’s worth it. There’s little point in sitting around and reflecting on where things went wrong,” she acknowledges. “Instead, let’s just get on and make a lasting change!”