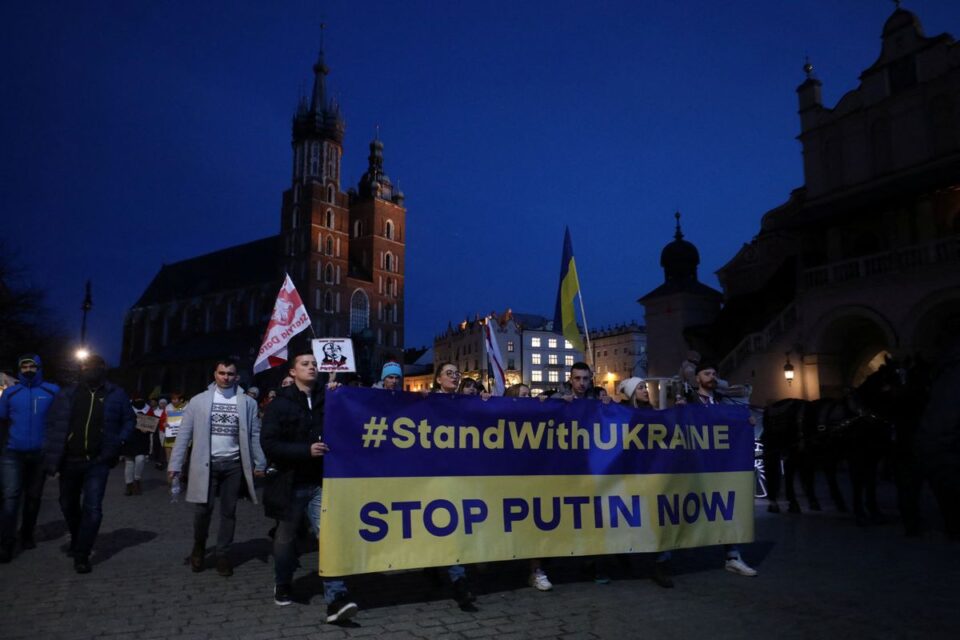 A protest against Russia’s military operation in Ukraine, in Krakow, Poland

By Andrzej Duda, President of the Republic of Poland

The outbreak of the Second World War, which began on September 1, 1939 with the invasion of Poland by the Nazi Third Reich, is one of the events annually commemorated throughout Europe. However, September 17, 1939, the date of the Soviet Union’s aggression against Poland, is not as widely known in the West. I believe this event needs to be remembered as it not only decided the fate of my homeland and other countries of Central and Eastern Europe, but it did so for the whole of the next half-century. If today we, Poles, and other peoples of our region, repeat that we know Russia and understand its imperial ambitions better than the West, we do so because of our historical experience, symbolised by 17 September.

The Red Army’s incursion into Polish territory two and a half weeks after the Wehrmacht’s and Luftwaffe’s attack was the implementation of the secret part of the Nazi-Soviet Pact signed on August 23, 1939 by the heads of the two diplomacies, Ribbentrop and Molotov. Two totalitarian empires entered into an alliance, planning to divide the independent countries of Central Europe amongst themselves. The German sphere of influence was to include western Poland, Lithuania and Romania, while Soviet control was to extend over eastern Poland, Latvia, Estonia and Finland.

For my nation, the most important consequence of the pact was the joint liquidation of the independent Polish state and the division of our territory between two occupying powers, Nazi Germany and Communist Russia. Other provisions of the treaty were partially modified in the following two years. Finland managed to protect its sovereignty in the Winter War of 1940. Lithuania, though, after an episode of relative independence, was absorbed by the Soviet Union. But various detailed amendments did not affect the critical principle of the pact – Hitler’s and Stalin’s imperialisms were from then on to decide the fate of the peoples and states of our part of Europe.

Under German occupation, Poland suffered enormous human and material losses. The Nazis killed 6 million citizens of the Republic of Poland, including nearly 3 million Polish Jews. They destroyed and burned thousands of Polish towns and villages, most of all the country’s capital, Warsaw. They stole countless material possessions and cultural assets, both private and public, which were never returned to my country. Only a few of the perpetrators of German genocide, extermination, war crimes, mass terror and looting were brought after the war before the tribunals in Nurnberg and Warsaw and suffered the punishment they deserved.

Still, Nazi Germany’s crimes were at least morally condemned by the entire free world. Unfortunately, this does not apply to the crimes of Communist Russia, which went unpunished and often forgotten.

What did the Soviet occupation of more than half of Poland’s pre-war territory entail? It entailed the Katyn Massacre – the extermination of 22,000 prisoners of war: Polish army officers, policemen, soldiers, civil clerks and other political prisoners. They were shot in defiance of all international conventions because Stalin regarded them as patriots loyal to their homeland and implacable enemies of communism. It entailed the deportation of half a million of my compatriots to gulags and forced settlements in Siberia and the Asian part of the Soviet Union, a vast number of whom never returned from that ‘inhuman land’ and died in exile. It entailed brutal NKVD terror and ideological indoctrination, attempts to crush the Polish national identity and tradition, the coercive instillation of communist principles in children and forcing a renunciation of faith.

We Poles are not the only ones who have suffered from all of it. The Baltic nations, Estonians, Latvians and Lithuanians, were equally afflicted. So were other nations that fell within the Soviet sphere of influence after Russia’s victory over the Third Reich.

The Nazi-Soviet pact collapsed less than two years after its conclusion, when
Germany attacked Stalin’s Russia on 22 June 1941. But the principle stating that the fate of the Central and Eastern European countries was to be decided not by their free peoples but by the rulers of the imperial powers remained in force.

The Soviets defeated the Nazis and, in 1945, seized the entire territory of Poland and other states further to the west and south, as far as the rivers Elbe, Danube and Drava. Some of them were annexed directly to the Soviet Union as federal states – such was the fate of the Balts, Belarusians or Ukrainians. In others, Russia installed puppet governments made up of local communists completely subservient to Moscow – this happened in Poland, Czechoslovakia, Romania, Hungary, Bulgaria and eastern Germany.

For our peoples, the defeat of the Third Reich did not bring long-awaited freedom. The subjection to the Russian empire continued until the fall of communism – for half a century!

It was not until the democratic changes initiated in 1989 by the Polish ‘Solidarity’ movement that the Poles and other nations of Central and Eastern Europe truly liberated themselves and regained the sovereignty of their states. Most of them gradually became full members of the European Union and Nato.

However, the independence of any country from our region has always been a thorn in the side of Russian imperialists. Thus, as soon as Moscow recovered from the shock of losing its Stalinist sphere of influence, it started moving toward restoring the empire. We remember the military assault on Georgia in 2008. We also remember several brutal suppressions of the freedom movements in Belarus and Ukraine. Finally, we remember Russia’s hostile policy towards independent Ukraine, the military annexation of Crimea and Donbas in 2014 and, above all, the ongoing full-scale genocidal war against the sovereign Ukrainian state unleashed on February 24, 2022.

For the nations of our region, who remember the historical events symbolised by September 17, there is no doubt that imperial Russia is seeking to take over other countries yet again. It wants the same thing it wanted in 1939 and 1940, when it acted in alliance with Hitler’s Germany, and between 1945 and 1991, when it ruled our countries on its own.

Russia has always wanted power over all of Central and Eastern Europe. But a free Poland, free Ukraine and all the other independent states of our region will never agree to this.
For our peoples, it is a matter of life and death, preserving identity and survival.
It is a matter of our future, security and prosperity.

Andrzej Duda is the President of the Republic of Poland. This text is simultaneously published in the Polish monthly Wszystko Co Najważniejsze as part of a project carried out with the Institute of National Remembrance and the Polish National Foundation

Biden to pay tribute to Queen Elizabeth lying in state

Uriah Heep frontman has led a charmed, if turbulent, life