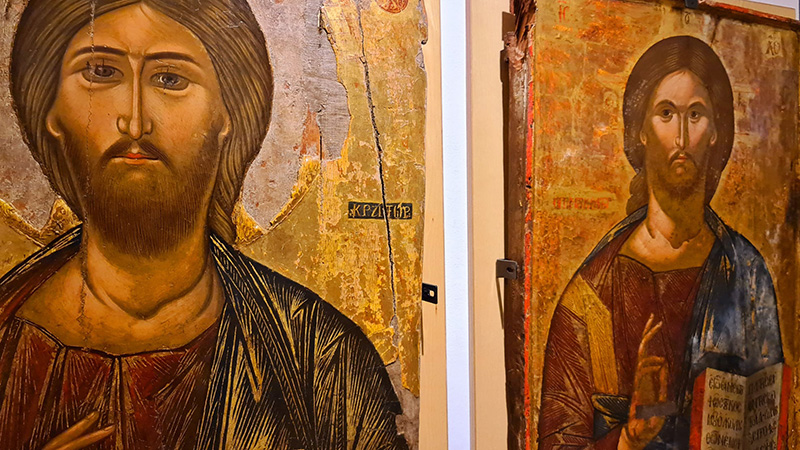 Paphos is more than just a place of natural beauty. It is a full of little chapels, churches, cathedrals, remote monasteries and historical and artistically significant monuments that bear witness to nearly 2000 years of Christian cultural life. Land of saints and miraculous icons, vibrant ceiling paintings in the apses of medieval churches, and priceless collections of ecclesiastical artefacts, books and antiquities.

“Christianity took root in Paphos at an early stage, prior to the other districts of Cyprus,” Paphos Regional Tourist Board head Nasos Hadjigeorgiou said. “The entire region is characterised by its innumerable churches, richly decorated with murals, Byzantine icons and holy relics, which provide an overview of Paphos’ religious inheritance.”

It should come as no surprise that the Bishopric of Paphos possesses a rich trove of art and artefacts chronicling the history of Christianity in the area, housed in a stunning, modern museum.

Located in Yeroskipou, the Ecclesiastical Museum of Paphos houses more than 100 icons that were gathered from places of worship all over the diocese, including the oldest icon ever discovered in Cyprus. It also houses other sacred items such as wine goblets, candlesticks, oil lamps made of metal from the fifth and sixth centuries, wood carvings and clerical vestments.

However, the museum’s purpose goes beyond simply showcasing these rare treasures. “It aims to collect, maintain, interpret and display objects of artistic, cultural, and religious significance for the study and education of the public,” Hadjigeorgiou told Living. “Furthermore, religious tourism raises awareness of the island’s Christian heritage, which helps to ensure its preservation.”

A 15th-century gospel manuscript, a 17th-century bible, and numerous Ottoman papers including the decrees issued by Sultan Abdülmecid in 1853 granting the Bishop of Paphos religious rights, are among the highlights of the museum’s collections, as is the remarkable collection of liturgical and ecclesiastical embroidery with gold-embroidered vestments from the 18th and 19th centuries.

The Byzantine Empire was renowned for its religious artwork, particularly its large, glittering mosaics and small, devotional panel paintings. The earliest known icon in Cyprus dates back to the 7th century. The damaged, yet well-preserved icon of Saint Marina depicts scenes from the saint’s martyrdom on its sides. Made of two wooden boards, the icon is even more significant because it avoided being destroyed during the iconoclast movement in 726AD when the Orthodox Church and the temporal imperial hierarchy opposed the use of religious images or icons.

The icon was removed from the Saint Marina church in Filousa, a village in the Diarizos valley in the Paphos region, constantly changing hands and hiding places over the centuries, and has now found its final resting place in the museum’s first exhibition hall.

The 16th-century icon of Saint George ‘Pervoliatis,’ or ‘water rider,’ is another unique item on display. The largest icon in the exhibition and a remarkable example of Byzantine art, it portrays the saint riding on the sea while rescuing a child from captivity. Elaborately painted in deep red tones, the item is one of eight icons portraying Saint George riding his horse, as opposed to the typical image of him slaying the dragon.

The Ecclesiastical Museum of Paphos, which encompasses six galleries, also showcases 11th-century murals from deserted temples, an epitaph with a large, embroidered and richly adorned cloth bearing an image of the dead body of Christ, and an impressive, gold iconostasis with intricate carvings and motifs. The iconostasis is said to symbolise “the division between heaven and earth” and the church’s function as an intermediary between the two, according to the bilingual signage throughout the museum.

“Although Paphos is considered as the mythical birthplace of the goddess Aphrodite, it has more significance as one of the most renowned religious destinations in the world since it was here that Proconsul Lucius Sergius Paulus, the first official Roman governor, converted to Christianity,” Hadjigeorgiou said. “This marked the beginning of the spread of Christianity throughout the world and is regarded as the first dynamic and triumphant victory of Christianity in the higher ranks of Roman society.”

The Ecclesiastical Museum of Paphos is open from Monday to Friday, 9am to 4pm, and Saturday from 9am to 1pm. It is closed on public holidays. For more information: +357 26 271221