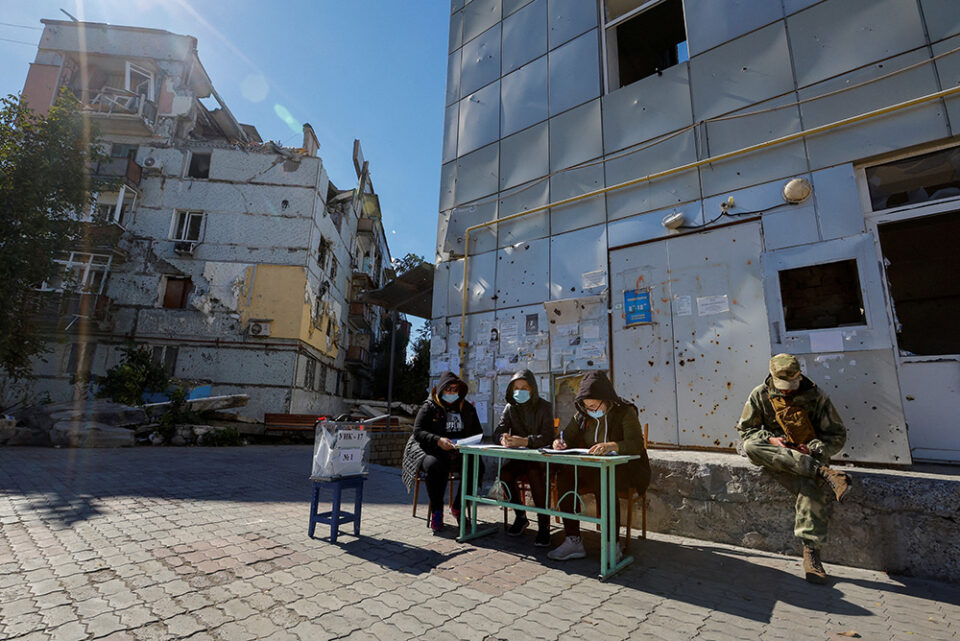 Members of an electoral commission wait for voters near a destroyed residential building on the third day of a referendum on the joining of the self-proclaimed Donetsk People's Republic (DPR) to Russia, in Mariupol, Ukraine September 25, 2022. REUTERS/Alexander Ermochenko TPX IMAGES OF THE DAY

Voting in referendums in Ukraine aimed at annexing territory to Russia enters a fourth day on Monday, after the United States warned of “catastrophic consequences” if Moscow used nuclear weapons to protect any annexed regions.

The votes in four eastern Ukrainian regions, which Kyiv and the West regard as a sham, saw Russian-backed officials carry ballot boxes from door to door, accompanied by security officials, said Luhansk’s regional governor.

Serhiy Gaidai said residents’ names were taken down if they failed to vote correctly or refused to cast a ballot.

“A woman walks down the street with what looks like a karaoke microphone telling everyone to take part in the referendum,” the governor added in an interview posted online.

“Representatives of the occupation forces are going from apartment to apartment with ballot boxes. This is a secret ballot, right?”

Russian forces control territory in the four regions that represents about 15% of Ukraine, or roughly the size of Portugal. It would add to Crimea, an area nearly the size of Belgium, that Russia claims to have annexed in 2014.

Russia’s parliament could move to formalise the annexations within days.

By incorporating the areas of Luhansk, Donetsk, Kherson and Zaporizhzhia into Russia, Moscow could portray efforts to retake them as attacks on Russia itself, a warning to Kyiv and its Western allies.

U.S. National Security Adviser Jake Sullivan said the United States would respond to any Russian use of nuclear weapons against Ukraine and had spelled out to Moscow the “catastrophic consequences” it would face.

“If Russia crosses this line, there will be catastrophic consequences for Russia,” Sullivan told NBC’s “Meet the Press” television program on Sunday.

“The United States will respond decisively.”

The latest U.S. warning followed Wednesday’s thinly veiled nuclear threat by President Vladimir Putin, who said Russia would use any weapons to defend its territory.

Foreign Minister Sergei Lavrov made the point more directly at a news conference on Saturday.

He was speaking after a speech to the U.N. General Assembly in New York, in which he repeated Moscow’s false claims to justify the invasion that the elected government in Kyiv was illegitimately installed and filled with neo-Nazis.

Asked if Russia would have grounds for using nuclear weapons to defend annexed regions, Lavrov said Russian territory, including that “further enshrined” in Russia’s constitution in the future, was under the “full protection of the state”.

In an interview broadcast on Sunday, British Prime Minister Liz Truss told CNN, “We should not be listening to his (Putin’s) sabre-rattling and his bogus threats.

“Instead, what we need to do is continue to put sanctions on Russia and continue to support the Ukrainians.”

In the 24 hours to Monday morning, Russian forces launched five missile and 12 air strikes, as well as more than 83 attacks from multiple rocket-propelled grenades, the general staff of Ukraine’s armed forces said.

More than 40 settlements in all were affected by enemy fire, mostly in southern and southeast Ukraine.

“As a result of a large-scale fire and the detonation of ammunition, the evacuation of the civilian population was organised,” it said on messaging app Telegram.

“Preliminarily, there have been no casualties.”

Reuters could not independently verify the accounts.

PROTESTS IN RUSSIA OVER DRAFT

More than 2,000 people have been detained across Russia for protests at the draft, says independent monitoring group OVD-Info. With criticism of the conflict banned, the demonstrations were among the first signs of discontent since the war began.

In Russia’s Muslim-majority southern region of Dagestan, police clashed with protesters, leading to the detention of at least 100 people.

“Keep on fighting so that your children will not be sent to their deaths – all those that can be drafted by this criminal Russian mobilisation,” he said.

“Because if you come to take away the lives of our children – and I am saying this as a father – we will not let you get away alive.”