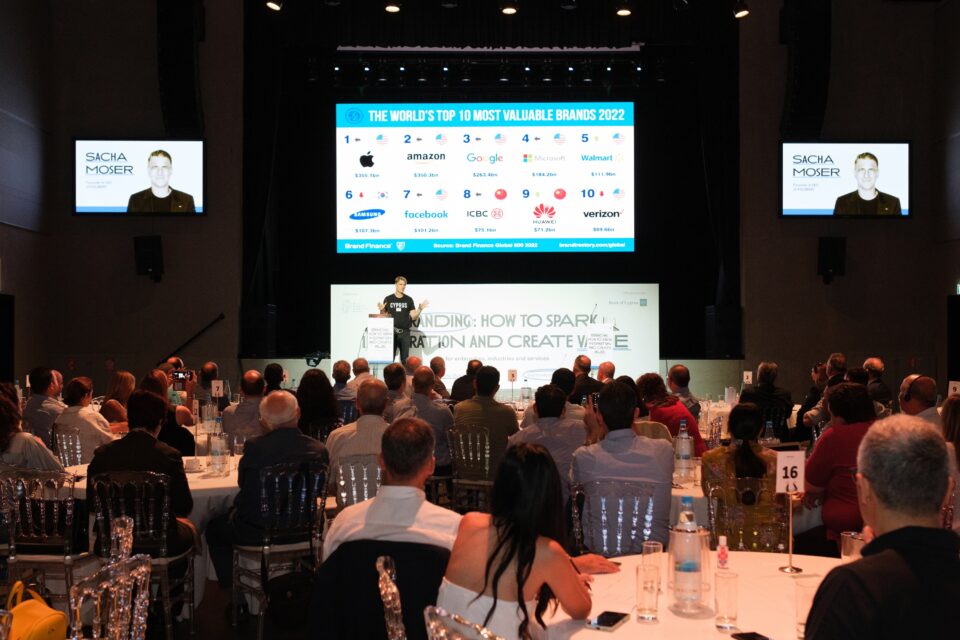 The event held by the Nicosia Chamber of Commerce and Industry

The Nicosia Chamber of Commerce and Industry (Evel) this week announced that it successfully held an event on branding and businesses and professionals can create value for enterprises, industries and services.

The event was welcomed by the President of the Nicosia Chamber of Commerce and Industry Michalis Mousiouttas, who referred to the importance that the chamber attaches to the continuous education and training of its members.

At the same time, Xenios Konomis, director of the large and small and medium enterprises division of the Bank of Cyprus, which sponsored the event, also addressed the event.

The main speaker was Sacha Moser, founder of Berlin-based firm Foundry, a company that distinguished itself in the German Brand Awards over the past four years. The company also has offices in Zurich and New York.

“In his presentation, which took place in a packed room, Moser referred to the modern challenges faced by businesses and the importance of branding as a compensatory tool,” the chamber said in a statement.

“Through examples and case studies, participants were informed about the ways in which branding can create business value, new growth opportunities, efficiency and sustainability, as well as leveraging the various techniques and tools to benefit their organisations,” the chamber concluded.

Cypriot company Tsokkos Hotels this week announced a loss after tax of €6.15 million for the first six months of 2022, compared to losses of €4.88 million in the corresponding period last year,

This increase has been attributed to the operation of more hotel units compared to the corresponding period of 2021.

“Nevertheless, turnover remains at low levels compared to previous years due to the conflict between Russia and Ukraine,” the company explained.

Moreover, the main risks and uncertainties facing the group include the seasonality of operations, as well as the deterioration of the economic environment both in Cyprus and internationally.

Additional factors include the volume and quality of the tourist flow to and from Cyprus, the increase of competing tourist units within Cyprus, as well as the opening of competitive markets in neighbouring countries.

Finally, Russia’s invasion of Ukraine and subsequent sanctions against Russia have resulted in the loss of those tourist markets for Cyprus.

The Industrial Production Index in July fell by 0.5 per cent year-on-year, reaching 153.9 units (2015=100), according to a report released this week by the Cyprus Statistical Service (Cystat).

The decline has been attributed to the performance of a number of sectors, including electricity supply, mining and quarrying, and water supply.

For the period between January and July 2022, the index recorded an increase of 3.3 per cent, compared to the corresponding period of the previous year.

The manufacturing sector rose by 1.8 per cent year-on-year, while the electricity supply sector declined by 6.8 per cent.

Mining and quarrying fell by 6.6 per cent, while water supply and materials recovery decreased by 0.1 per cent.

The general Cyprus Stock Market Index was at 72.96 points at 13:56 during the day, reflecting a drop of 0.67 per cent over the previous day of trading.

In terms of the sub-indexes, the main and alternative indexes fell by 0.74 per cent and 0.43 per cent respectively, while the hotel and investment firm indexes remained stable.