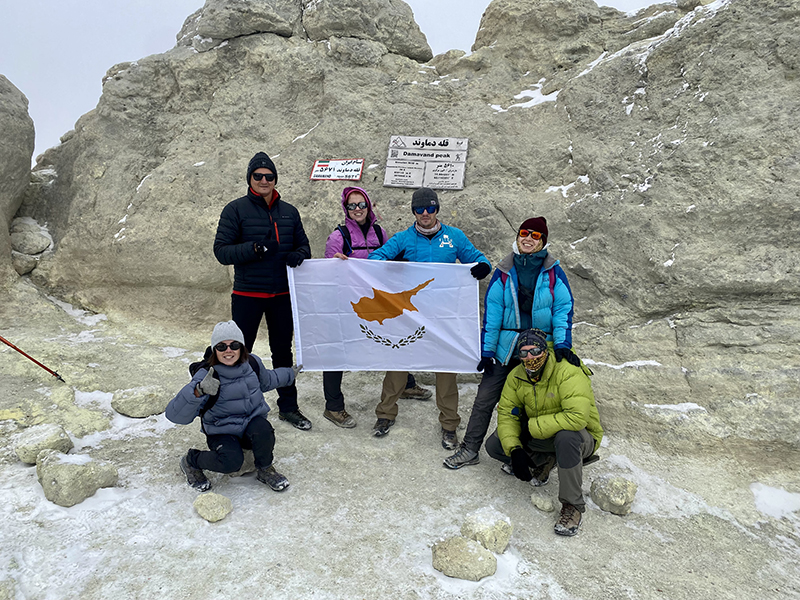 The Cyprus flag on the top of Mount Demavend

A group from Limassol recently braved escalating tension, altitude sickness, and lethal gas to get to the top of Asia’s highest peak, Mount Damavand in Iran. ALIX NORMAN finds out how it went

In Iran, there’s a legend of a king so evil that the devil kissed his shoulders! Two serpents emerged and each day the wicked king allowed the snakes to feast on the brains of young men. Fortunately, a hero defeated the king in battle, imprisoning him forever under a mountain. The evil king is still there, breathing the fire of the eternally damned. And that, according to myth, is why Mount Damavand is forever shrouded in smoke…

Alex Larin has a different explanation: less exotic; a little more factual. “Fumaroles!” he says. “Mount Damavand is a volcano; it’s dotted with fumaroles that issue a sulphurous smoke…”

As the organiser of a nine-member party from Cyprus who recently climbed to the summit of Mount Damavand, Alex is knowledgeable about everything from the mountain’s terrain to its geology. He had to be: at 5,609 metres, Damavand is not only the highest mountain in the Middle East but also a notoriously challenging climb…

“Many don’t make it,” says Alex. “Even accomplished climbers find Damavand difficult; the success rate is far from 100 per cent. So I’m especially proud that a group from Cyprus, comprising six women and three men, was able to reach the summit!”

Located in the Alborz range of Iran, Damavand is truly the stuff of which legends are made. The ancient Persians considered the mountain both sacred and insurmountable. Even the name itself is foreboding – Damavand is said to translate as the mountain of smoke and fire.

“In actuality, Damavand is an active volcano,” Alex reveals. “The 21st highest peak in the world, and the highest volcano in Asia, it’s littered with fumaroles: fields of vents that emit pungent sulphurous gases. On top of that, the terrain is mostly scree; landslides are a frequent hazard. Altitude sickness is common here, even amongst experienced mountaineers. And to top it all off, Damavand is in the heart of Iran – not a country you want to be visiting at the moment!”

The Cyprus group – all of whom hail from Limassol – were in Iran when the recent unrest began. “It’s never easy to get to Iran,” says Alex. “There are endless visas and permits. But we were especially worried when we realised we’d walked into the midst of such turmoil…”

The local guide told the group that one of his friends had been “disappeared”. A woman in a small village railed at the female climbers for adhering to the law of hijab – insisting they should remove their headscarves in protest of restrictions. And even small hamlets exhibited a strong police presence, says Alex.

“I think something huge is about to happen in Iran,” he says. “You could feel it in the air. We may not have seen the rioting and demonstrations, but everywhere we went there was a feeling of extreme unrest.

“Many of us come from nations where saying the wrong thing can – or could in the past – make you disappear,” says Alex, adding that the nine climbers hailed from Russia, Latvia and the Ukraine. “We know what a country on the brink of revolution feels like. It’s part of the reason that we all live in Cyprus. And, from the outset, we climbed as one united group under the flag of a country that has welcomed us all with open arms.”

Politics aside, the climb itself took several days. But the preparation was months in the making. “All of us trained for many weeks in advance,” says Alex. “We’re all healthy, sporty people who enjoy a challenge. But Mount Damavand has a reputation for defeating even the hardiest mountaineers. It is,” he adds, “as mental as it is physical.”

Arriving in Tehran on September 17 – “there are no direct flights from Cyprus,” Alex explains, “so half of us flew via Vienna, half via Doha” – the group first completed an acclimation climb up a nearby 3,900-metre peak. “On September 19 we hired a bus and drove out to Damavand,” Alex continues, “and spent another two days checking equipment and preparing for the climb.”

The actual ascent began on September 21, when the group climbed from base camp to a height of 4,700 metres and then back down to the camp at 4,200 metres. “We climbed above the necessary height to check everyone could manage the altitude,” Alex explains. “Altitude sickness is very punishing, and this far out from civilisation there were no easy fixes should something go wrong. Plus we had the sulphurous gases to contend with – it’s not the same as climbing a normal mountain,” he adds. “I’ve climbed Elbrus, the highest mountain in Europe, and that was far easier. Here, on Damavand, you’re dodging poisonous gases that can suddenly vent up from the earth. To avoid the fumaroles, there were times when we didn’t just have to climb, we needed to run!”

On September 22, starting at 2am in the morning, the whole group made a final push for the peak. “The last 200 metres were the hardest,” Alex recalls. “Finally, we could all see the summit; it’s a point at which even experienced mountaineers often give up – it becomes a mental effort rather than purely physical. But we all supported each other, encouraging and coaxing in equal measure. And at 11am, we raised the flag of Cyprus on top of the mountain of smoke and fire!”

Raising the flag, says Alex, was an incredibly proud moment for the entire group. “Although we only remained at the summit for 10 minutes due to the gas and the altitude, it was very moving. Cyprus is the island that has taken us in, allowed us a freedom we might not otherwise have experienced. It is our home and our hearts.

“Returning to the island from a country which has restricted internet usage, where police stalk every corner and anyone might disappear made us appreciate Cyprus all the more. There are no evil rulers in our adopted homeland – under or above the earth!”

For more information on the ascent of Mount Damavand, visit the Instagram account of the group’s guide @sergei_broshevan

WHO regional office for Larnaca

PASYKAF kicks off October ‘Together in Life’ campaign