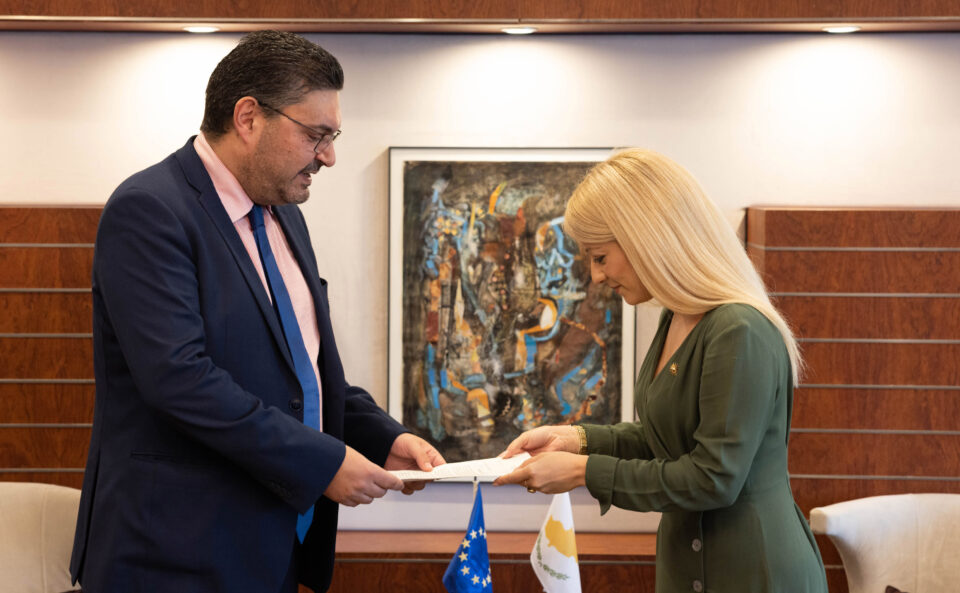 Finance Minister Constantinos Petrides met with House President Annita Demetriou in her office to deliver his accompanying letter for the state budget, as the budget itself is submitted electronically.

The state budget for 2023, submitted on Thursday by Finance Minister Constantinos Petrides, has been increased by €500 million.

Petrides met with House President Annita Demetriou in her office to deliver his accompanying letter for the state budget, as the budget itself is submitted electronically.

“I am feeling quite emotional as this is the last budget submitted by the government of the last decade,” Petrides said, pointing out that its first budget was submitted in crisis conditions.   He was referring to the 2013 financial crisis.

“The final budget is submitted again under conditions of a crisis which is not endogenous, but international,” he said. “It is a budget full of weapons to deal with the crisis”.

He clarified that that despite the prevailing adverse economic conditions, as a result of exogenous factors this time, such as the war in Ukraine, and despite the rise in inflation and the consequent increase of operating expenses by 15.5 per cent, development expenses show an increase of 12 per cent thanks to the planned start of implementation of large development projects (road and building projects), as well as the promotion of projects included in the Recovery and Resilience plan.

Compared to last year, the budget has increased by approximately €500 million, an increase that “aims to shield growth, which is our response to the crisis,” Petridis said.

The minister noted that in terms of servicing public debt, expenses are €500 million less than last year in servicing interest. ”

Despite the crisis, the increase in benefits, the support for inflation beyond €350 million, despite the increase in development costs, we have relieved the public by €500 million to service interest,” he said.

“Times are uncertain and hard,” Petrides concluded, saying that the budget gives the guarantees to move forward, but that the right policies are needed to use it properly.

“I am sure that after the parliamentary control we will be able to move forward”.

The House president thanked Petrides for his submission of the budget, noting that “a prudent fiscal policy is what our state needs for the benefit of the public”.

She added that the budget will be reviewed by the competent House committees and decide on its passing, as is customary.

Demetriou remarked that from the time she served as an MP to where she is now as House president, she has noticed that every yearly submission of the budget comes with improvements in finances.

“Particularly now, we can all see it will be a difficult period financially because of external factors, and I believe we must guard the Republic of Cyprus so that it can get through this crisis”.

In the letter he delivered to Demetriou, Petrides confirmed that the economy continues its positive course after a significant recovery, adding that a positive growth rate of 5.7 per cent is expected that will in turn positively affect the labour market, with a downward trend in the unemployment rate in 2022.

He also reported that the labour market in Cyprus is improving, with the unemployment rate expected to decline in 2022 to around 7 per cent of the workforce compared to 7.5 per cent last year.

“However, the economy in 2023 is expected to show some deceleration due to significant international challenges and the impact of price and interest rate increases, with growth forecast to slow to around 3 per cent”.