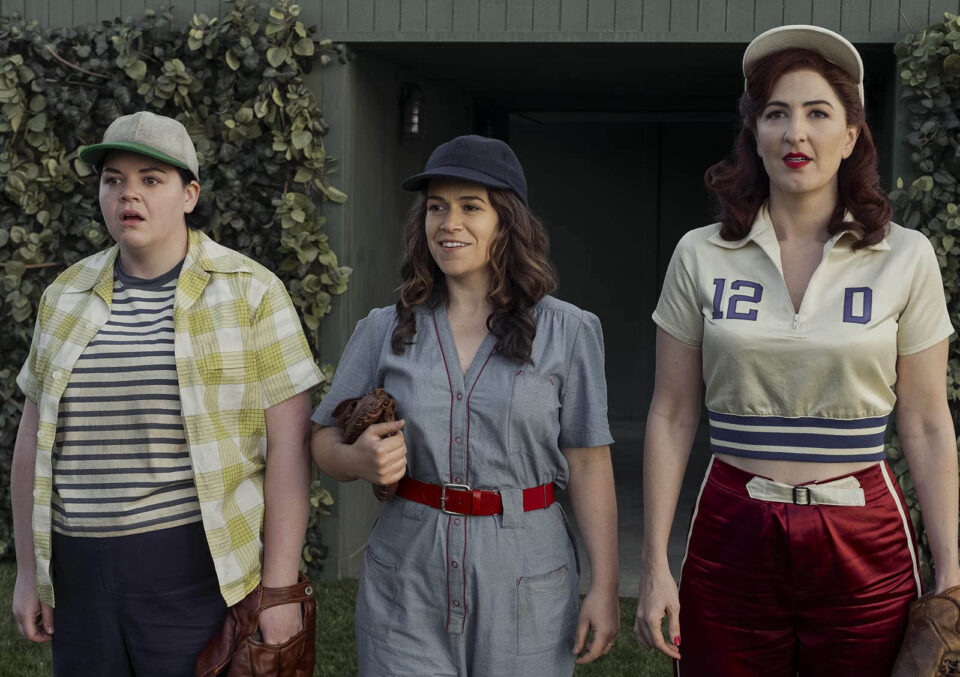 In new A League Of Their Own series, tensions between femininity and sexuality explored in women’s sports says MERSINI KARKOULAS

Amazon Prime Video’s recent release A League Of Their Own has been making headlines with its frank portrayal of queer women, with the show presenting a diverse range of queer bodies and expressions. The cast features women presenting queerness from high femme to more masculinised, and each representing different ways of being queer.

The TV series is an update on the 1992 Penny Marshall film starring Geena Davis and Tom Hanks. The story follows the journey of the newly formed baseball team, the Rockford Peaches during their first season.

Set in 1943, many women’s husbands were soldiers in the second world war. Due to the men being off at war, many male teams were left without enough players and this was fundamental in the formation of the All-American Girls Professional Baseball League (AAGPBL) which filled the gap left by men’s baseball. The show gives a fictionalised account of the real-life formation of the AAGPBL.

On the surface, A League Of Their Own is a show about women’s baseball – but it also delves deep into the stereotypes that surround women in sports.

The show teases out a tension between femininity and queerness. In the show, the people running the AAGPBL see the two as mutually exclusive. They demand the women conform to certain expressions of femininity because they expect it will hide any queerness.

This isn’t unique to the show: as early as 1934, people thought sport would masculinise its female players. Masculinity in a woman was feared to impact their marriageability, and was thought to suggest queerness.

Fears around the masculinisation of women is central to A League Of Their Own. Failure at charm school, we see, means getting kicked off the team. A woman not wearing makeup is immediately dismissed from the Peaches. A second teammate is saved from the same fate only when her new colleagues claim that she was helping them with their own makeup.

For 1940s women’s baseball leagues, these gender ideals were thought to hide queerness in their players. By presenting the women as feminine, audiences would not suspect non-heterosexual preferences.

A League Of Their Own shows that the consequences for refusing to conform are real. Careers are on the line. To stay on the team, female players must appear to be available and heterosexual to keep attracting audiences to baseball games. The real AAGPBL claimed “the natural appeal of women in every walk of life will be brought out in this venture”, which heavily implies a marketing strategy centring on women’s objectification.

The show is explicit in highlighting the connection between the feminine ideal and queerness. Rockford Peach Greta Gill explains to her teammate Carson that the beauty lessons and the AAGPBL rules are “to make sure that we don’t look like a bunch of queers”.

But queerness is not so easily eliminated. Wearing a skirt doesn’t make a person less of a lesbian. Gender and sexuality are not so easily aligned.

The show emphasises the safety precautions players must take to “pass” as straight. Greta, a queer player who appears very feminine, makes sure that she is seen “on the arm of a man” before she pursues a female love interest.

Meanwhile, Greta’s best friend, Jo de Luca, is under suspicion of being queer by her teammates, and it is because she appears more masculine. Coach and team leader Carson lies to protect Jo by inventing an affair with a prominent male baseball figure.

Part of what the AAGPBL aims for in enforcing femininity holds weight. Greta doesn’t have to lie. No one suspects she’s queer, because of her feminine appearance. In contrast, more masculine players are always suspect.

Of course, we know that people have always been queer, baseball players included. Maybelle Blair, who played as part of the original AAGPBL, recently came out as gay, at the age of 95. Stereotypes about gay female sports players hold impact because players are indeed sometimes gay.

But, as A League Of Their Own shows us, hiding queerness behind a veneer of femininity doesn’t erase it. People will always find ways to be true to their authentic selves.

Mersini Karkoulas is a PhD candidate, University of Wollongong. This article is republished from The Conversation under a Creative Commons licence