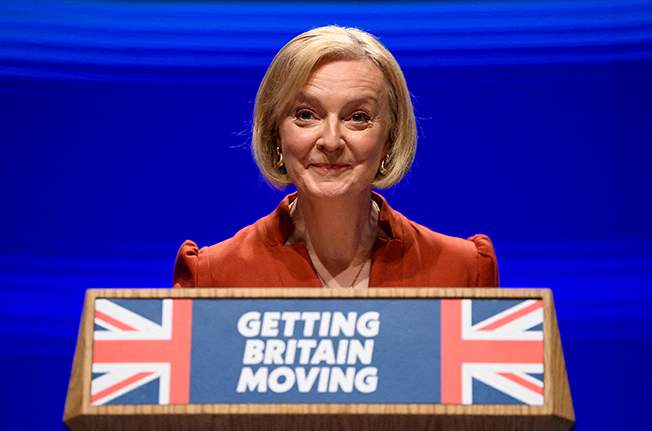 British Prime Minister Liz Truss faced growing pressure on Thursday from lawmakers in her own party to rethink tax-cut plans that sent markets into turmoil, with one ally saying it would be a “disastrously bad idea” to oust her a month into the job.

Truss’s economic package, announced last month, has caused a rout in the government bond market, with some investors and Conservative Party lawmakers calling on her to reverse a plan for 43 billion pounds of unfunded tax cuts, including a move to hold corporation tax at just 19%.

The government has said it will stick to most of its tax cut plans while also protecting public spending, but economists and critics say something has to give.

On Thursday, foreign minister James Cleverly shied away from confirming or denying whether the government would retain its corporation tax policy, saying only it was important to keep businesses competitive.

“The chancellor will come to the despatch box,” he said when asked by Sky News whether the corporation tax plan would definitely stay. “I think it’s absolutely right that we’ve made it clear that we want to invest in businesses.”

There has been vocal criticism of the government’s overall plans from within the Conservative Party as polls show its support has collapsed. Newspapers reported that some lawmakers who never wanted Truss to replace Boris Johnson as leader in the first place already wanted her out.

“I think that changing the leadership would be a disastrously bad idea, not just politically but also economically, and we are absolutely going to stay focused on growing the economy,” Cleverly said of Truss.

Truss, the 47-year-old former foreign secretary, was elected in September by Conservative members on a promise to snap the economy out of years of stagnation by cutting taxes and reforming areas such as planning, migration and employment.

But a fire-sale in the government bond market has driven up borrowing costs and mortgage rates and forced the Bank of England to intervene to protect pension funds.

“I can see only one outcome: the withdrawal of most of the mini-Budget,” Paul Goodman, editor of the influential ConservativeHome website said.

The government bond market saw yields on longer-duration gilts hit 20-year highs on Wednesday before the BoE stepped in with its biggest intervention in a single day since launching its emergency bond-buying programme in late September. Trading was calmer on Thursdaywith yields falling.

The Bank’s bond purchases are due to end on Friday but many analysts think it will have to maintain some kind of support with investors still alarmed by the government’s plans.

“You know, a central bank is like a doctor: if the patient is really ill, and even if the patient has misbehaved, it is very difficult for a doctor to walk away,” said Mohamed El Erian, chief economic adviser at Allianz and president of Queens’ College, Cambridge.

“So the reality of central bank emergency interventions is that they tend to continue for longer than what is expected. And central banks simply will not walk away,” he told BBC radio.

Finance minister Kwasi Kwarteng is due to present a full fiscal policy to parliament along with borrowing and growth forecasts on Oct. 31, but El Erian cautioned that damage was being done in the meantime.

“People’s confidence and business confidence is coming down. So if we wait another three weeks, there will be more damage not just to actual growth, but also potential growth,” he said.

There are already signs that a rise in borrowing costs is feeding through into the real economy as higher mortgage costs cool the housing market.

The Royal Institution of Chartered Surveyors said on Thursday that house prices showed the weakest growth in September since early in the coronavirus crisis and they look set to fall with mortgage rates recently jumping further.

The country’s largest homebuilder, Barratt BDEV.L, has flagged a plunge in reservation in recent months, causing it to issue a profit warning after what has been a robust few years for the sector. Read full story

Meanwhile, as Truss battled with the turmoil, she met King Charles for a weekly audience at Buckingham Palace between monarch and prime minister on Wednesday.