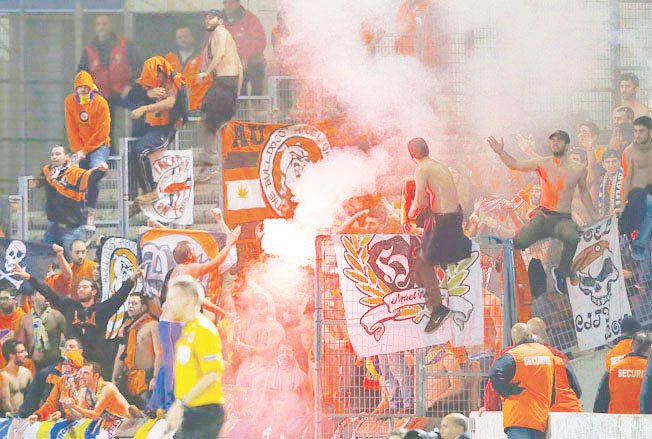 The football match at Nicosia’s GSP stadium two weeks ago between Apoel and AEL resulted in violent incidents between the fans of the teams, who turned the highway into a place of violence after the match with the result that a man suffered head injury and was transferred to hospital.

A car was set on fire and another car was destroyed and stones and other objects were flying all over aimed at the supporters of the opposing teams. The ugly scenes of vandalism ended soon after the police interfered using tear gas to disperse the hooligans.

At another football match at Nicosia’s GSP stadium last Friday between Apoel and Karmiotissa fighting broke out after the end of the first half. During the ensuing clashes between the fans, a man was arrested for carrying a knife, which he most probably intended to use. Quo vadis!

In retrospect, one can reminisce about the days in the 1960s when football was a pleasant game and an enjoyable family outing with hooliganism and vandalism were almost unknown. Nowadays the situation in football has changed dramatically, for football matches attract large crowds who are responsible for those ugly scenes and violent behaviour we witness either on the spot or on TV.

An argument between players on the pitch ignites a spark in the stands where fighting may break out, smoke bombs may be let off and flying bottles and darts aimed at the supporters of the opposing team may hit their target before the eyes of the astounded policemen whose hazardous mission to keep order becomes impossible. The culmination of football hooliganism is most strikingly observed in the ensuing battles outside the stadium where cars may be deliberately set on fire, neighbouring houses’ windows ruthlessly stoned, innocent people relentlessly attacked and injured, shops damaged and private and public property wrecked.

Football is no longer an enjoyable spectator sport but a battle between teenage enemy groups flooding the football stadiums determined to cause trouble, chaos and anarchy

What then is the root cause of this unacceptably uncontrollable behaviour of our youth? There is no doubt that our society is characterised as the arena of villainous antagonism rather than healthy competitiveness, which has fatally led to the decline of values and morals. Materialistic values have overwhelmingly outweighed spiritual ones which are undermined and victimised for the sake of the “keep up with the Joneses” philosophy permeating the very core of our life.

The state is riddled with scandals of all hues under the superficially austere ‘eye of the law’. The rivalry in the political arena solely aims at the rise to power at any cost; the general good is located at the bottom of the list of priorities. The family, being the smallest cell of society, is keeping pace with it; glued to their TV sets with parents watching soap operas after a tiring day at work, neglecting their parental duties and inevitably blocking the family channels of communication. The church’s preaching in no way tallies with its earthly deeds thus remaining a remote resort only for elderly people. Schools promotes stressful antagonism aimed at enabling students to simply pass exams. What could one expect of the youth then if grown up people convey messages of this nature, setting a pattern, which invites imitation?

Having said all that, it is abundantly clear that our teenagers feel abandoned, hopeless and frustrated without an identity and give vent to their depressed feelings at football stadiums by waging a war on society, family and church that they themselves believe deprive them of the right to function decently in society.

They deify their football heroes and find identification among their peers through the various football fans’ associations, namely, “Gate 1, 2 or 3…”, which help them restore their confidence, re-establish the sense of belonging and eliminate even briefly their sense of loneliness.

The phenomenon of football hooliganism is also present in other countries where unemployment, poverty and misery reign and unavoidably force the youth to resort to violent behaviour which can be interpreted as a rejection of authority and a protest against an uncaring society that leaves them exposed to the world without any shelter.

Nothing mysterious about Dhekelia baby graves

Tatar’s request for a separate agreement with Unficyp: A legal reply