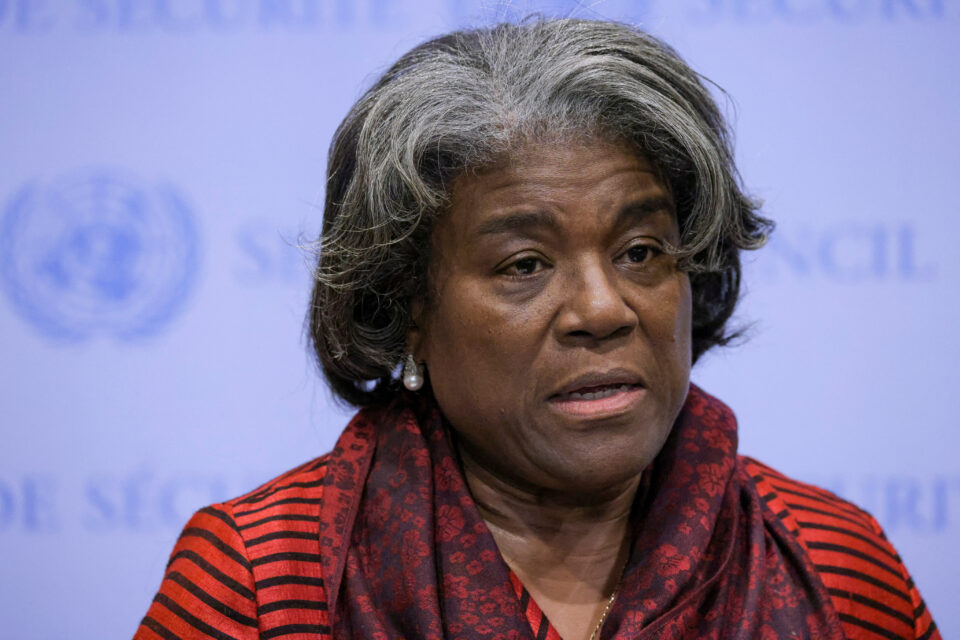 US ambassador to the United Nations Linda Thomas-Greenfield

Each time the United Nations gathers to debate and vote on Russia’s invasion of Ukraine, it becomes more obvious that the vast majority of the international community condemns the invasion and wants the conflict to stop. But what is also becoming clear is that the world is hopelessly divided as to how to bring the war to an end.

The latest vote in the UN General Assembly saw a clear condemnation of Russia’s illegal annexation of four Ukrainian regions and a demand for the withdrawal of all occupying forces. The initial draft resolution was sponsored by 43 member states and eventually supported by 143. Apart from Russia, only four other countries voted against the resolution: Belarus, North Korea, Nicaragua and Syria.

So it’s clear that Russia’s invasion of Ukraine has negligible international support. But where international consensus is crucially insufficient is in relation to how the international community should respond. The key issue appears to be whether – and under what conditions – Moscow and Kyiv should enter into negotiations. This is clearly obvious from the statements made before and after the vote.

China, India and South Africa, which all abstained from the vote, expressed concern that the resolution neglected the broader consequences of the war and wasn’t conducive to finding a political solution. Brazil, while voting in favour, echoed these sentiments. Its representative expressed the country’s disappointment that the “proposal to include a clear message urging the parties to cease hostilities and engage in peace negotiations was not included in the draft”.

Similar sentiments in favour of the need to find a diplomatic solution were expressed by most other countries from the global south taking the floor. In terms of the vote, members of the China-led Shanghai Cooperation Organisation (SCO) either abstained (China, India, Pakistan, Iran and the states of Central Asia) or voted against (Russia and Belarus).

In clear contrast, western delegates focused on Russia’s violations of the UN charter and key principles of international law. As the US permanent representative to the UN, Linda Thomas-Greenfield, put it: “the only way to bring peace is for the international community to show what it will not tolerate”.

The problem, therefore, is this. No country has recognised Russia’s annexations – either of Crimea in 2014 or of the Donetsk, Kherson, Luhansk and Zaporizhzhia regions in 2022. Almost no country has shown support for Russia’s increasingly brutal military campaign in Ukraine. Yet the international community is not united enough to bring an end to the war – either by forcing Russia to cease its military campaign and withdraw troops from Ukraine or by facilitating a negotiated deal to end the war.

As long as countries such as China and India refuse to demand Russia end its occupation of Ukraine – and as long as Ukraine and its western backers insist on no negotiations with Russia until then, the resulting impasse allows Putin to keep escalating in Ukraine.

Importantly, there are also signs the Russian president may up the ante beyond Ukraine. This could include clandestine attacks on critical infrastructure, such as the one on the Nord Stream 2 gas pipeline, or on undersea data cables and cyber attacks targeting public services and utilities in countries supporting Ukraine.

Reneging on the Turkey-UN brokered deal allowing Ukraine to export grain would be another lever that Putin could use. And there are again signs that Belarus might be dragged into Russia’s war.

Giving Putin space and time to escalate, thus, presents a problem. And as Putin’s attempts to turn the tide in a war that he is clearly not winning bear little fruit, the ultimate danger of an all-out confrontation with the west and of nuclear Armageddon increase.

Nato, the EU and the G7 have doubled down on their support for Ukraine and for sanctions against Russia. As important as this western support is, it has arguably shaped Putin’s perceptions of what his choices are – keep escalating and keep threatening further escalation until a deal between Kyiv and Moscow is seen in the west as the lesser evil and Ukraine is pressured to negotiate something that offers Putin a face-saving way out.

Putin has so far managed to prevent the emergence of a truly international coalition against the war. This is just one symptom of a broader problem – the Ukrainian and western narrative on Russia’s illegal war is not universally embraced. This is not because it is wrong, but because it does not suit everyone’s agendas. Curtailing western influence remains popular with autocrats fearful of democracy.

The lack of outright condemnation from members of the Brics and the SCO shows the limitations of the western approach. Simply keeping up support for Ukraine and tightening sanctions on Russia is clearly not enough to force the Kremlin to withdraw from occupied Ukrainian territory and constrain Russian military adventurism in the future.

This strategy of proactive containment of Russia can be credited with enabling Ukraine to stand up to Russia. But to secure the full restoration of Ukraine’s sovereignty and territorial integrity, the west’s approach needs to be complemented with a more nuanced and comprehensive diplomatic strategy that thwarts Russian efforts to score points among fellow autocrats. The latest UN vote is an indication that efforts in this direction are under way: Saudi Arabia and the other members of the Gulf Cooperation Council voted in favour of the resolution.

But above all, what is required is more constructive engagement with China, perhaps the only other critical actor that can force Putin on to an off-ramp. The sooner this happens, the more it can come from a position of relative strength because, given its global ramifications, in the Ukraine war, time is on nobody’s side any more.

Stefan Wolff, Professor of International Security, University of Birmingham. This article is republished from The Conversation under a Creative Commons licence