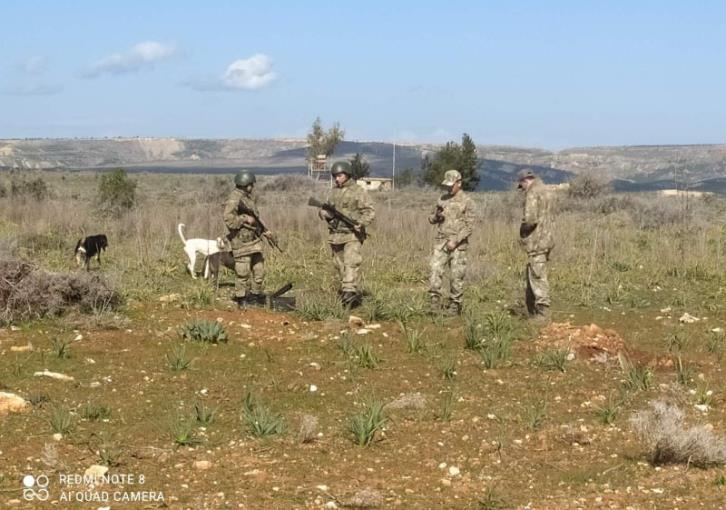 A previous case of Turkish soldiers approaching a farmer in Denia

Tensions are rising in and around the buffer zone after a Greek Cypriot farmer on Tuesday was approached by Turkish military personnel near Denia, Nicosia.

Denia community leader Christakis Panayiotou told local media that he was informed by the farmer that three army trucks with about 30 soldiers approached and threatened him, insisting he leave – despite having a licence to cultivate there. Similar incidents in Denia have typically only involved four to six soldiers.

Unficyp spokesperson Aleem Siddique told the Cyprus Mail that: “The farmer was working without authorisation inside the UN Buffer Zone and north of the ceasefire line, despite being warned several times that he should move back; Unficyp was present and our presence averted any tensions arising.”

Complicating matters are accusations that the Turkish military installed a new sentry post near Denia, with the UN saying the works took place just outside the ceasefire line.
The reaction in the government-controlled areas soured further amid claims that Unficyp personnel called on the farmer to leave – to avoid any further escalation, which has been interpreted as the farmer being in the wrong.

For its part, Unficyp stated that unauthorised construction activity is always protested to the opposing forces.
“This incident did not occur inside the buffer zone – however, as it is close to the ceasefire line we are raising our concerns with the Turkish military forces,” Unficyp said, adding that they are monitoring the area very closely.

It’s understood that the works on the sentry post in Denia may be at on one of the “hundreds” of such outposts which were pulled back from in 1989.
In May 1989, Unficyp persuaded the two sides to unman positions in the most sensitive parts of the buffer one in Nicosia, without changing the ceasefire lines. This helped to significantly reduce tensions.

Tuesday’s events compound developments further along the ceasefire line, most notably the north’s works on the Cetinkaya stadium near Ledra Palace – with the foreign minister rebuking Unficyp.
Denia has been a flashpoint with a series of similar such incidents over the past year – seemingly picking up since 2018.

Aside from Tuesday’s events, the most recent such incident in Denia occurred in August when a farmer said that he was harassed by Turkish soldiers – one with a loaded gun.

Denia, which was a mixed village with a total of 128 Turkish Cypriots and 170 Greek Cypriots prior to the intercommunal troubles in the 1960, is seen as a particularly sensitive area.

It is one of just four villages located fully within the buffer zone, the others being Troulli, Pyla and Athienou. Notably, however, incidents such as those on Tuesday appear to be far more prevalent in Denia.

Tuesday’s incidents are likely to further compound disagreements between the Republic and the north, with the Unficyp caught in the middle.

Unficyp is facing pressure from the ‘government’ in the north following calls that the peacekeeping force sign an agreement with it to carry out its mission in the ‘TRNC’. This is understood to be legally impossible for the UN to do.

At the heart of the issue is that every UN peacekeeping operation must sign a status of forces agreement with the host’s authority – which in this case is the Republic of Cyprus, and not the unrecognised ‘TRNC’.