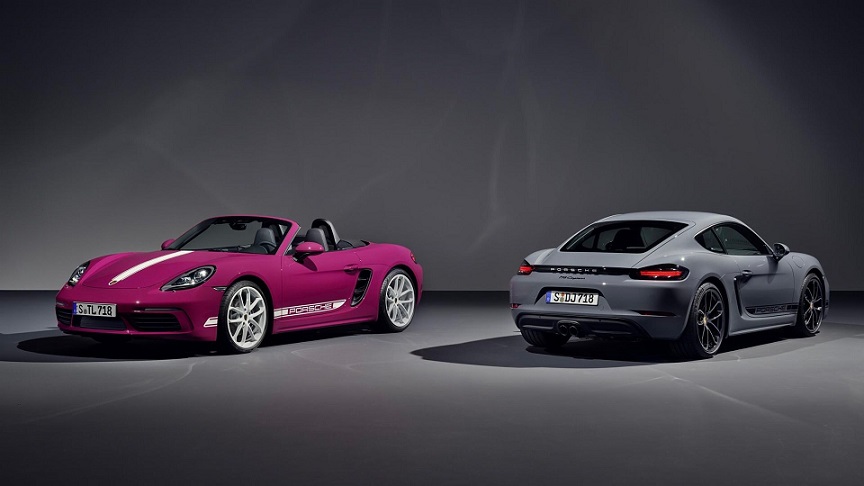 Both mid-engine models have always stood for the perfect combination of driving pleasure and everyday practicality; with the Style Edition, Porsche is now presenting an exclusive variant for customers who attach particular importance to a striking design for their vehicle. This is particularly evident in the selection of the exterior colour Ruby Star Neo, which provides a modern interpretation of the Ruby Star of the legendary Porsche 911 Carrera RS of the 964 generation.

Even if Porsche customers have their Style Edition models painted in a colour other than Ruby Star Neo, the new variants are clearly distinguishable. For example, they drive on 20-inch 718 Spyder wheels in high-gloss black, and their wheel hub covers feature coloured Porsche Crests.

The Style Edition is also recognisable by its black sport tail-pipes and “Porsche” lettering in high-gloss silver in the back. On the 718 Boxster Style Edition, “Boxster” lettering embossed above the side windows is added to the soft top as an exclusive label.

Customers can choose between two 718 Style Edition contrast packages at no extra charge: one in black, the other in white. Both include decorative stripes on the luggage compartment lid at the front and “Porsche” decorative lettering on the side, as well as black-and-white high-gloss paint finishes for the wheels and model designations at the rear, respectively.

Inside, the Style Edition models feature a leather package in black, including contrast stitching in chalk, illuminated door sill panels in stainless steel, and the Porsche Crest on the headrests.

In terms of powertrain and chassis, the Style Edition models do not differ from one another. Both are based on the entry-level versions of the 718 Boxster and 718 Cayman with the 220 kW (300 PS) two-litre boxer engine behind the seats.

The turbo-charged four-cylinder generates 380 Newton metres of torque and takes the Style Edition models, which are manually shifted through six gears as standard, from zero to 100 km/h in 5.1 seconds (with optional seven-speed PDK: 4.7 seconds). Regardless of the selected transmission, both reach a top speed of 275 km/h.

A.I. Motokinisi is the official importer and distributor of Porsche cars in Cyprus, with showrooms in Nicosia and Limassol.

Nouris: those responsible for Pournara clashes will be deported

EUC ‘A Great Place to Work®’ for second year running

Lidl Food Academy cooking up a delicious programme for 2023