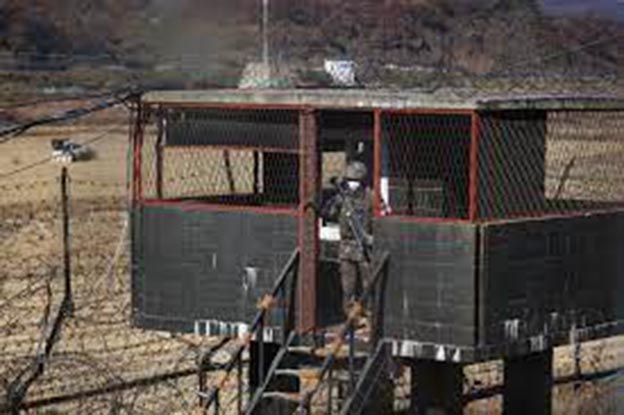 The North Korean manoeuvres follow the firing of more than 80 rounds of artillery overnight and the launch of multiple missiles into the sea on Thursday, including a possible failed intercontinental ballistic missile (ICBM).

They flights occurred between 11 am (0200 GMT) and 3pm. The virtual line is drawn north of the military border and is used as a basis for South Korean air defence operations, a South Korean official said.

He declined to give the virtual line’s distance from the Military Demarcation Line (MDL) but local news reports said it was 20 to 50 km (12 to 31 miles).

South Korea scrambled 80 aircraft, including F-35A stealth fighters, in response, while about 240 jets participating in the Vigilant Storm air exercises with the United States continued their drills, the military said.

North Korea fired at least 23 missiles on Wednesday – a record for a single day.

The series of launches this week prompted the United States and South Korea to extend the Vigilant Storm military drills, which have angered Pyongyang.

North Korea’s foreign ministry issued a statement saying the United States should stop its “provocative” air drills and warned that “sustained provocation is bound to be followed by sustained counteraction.”

The Pentagon on Friday said the drills with South Korea were currently only being extended till November 5.

“We remain in close coordination with our ROK ally on any additional changes and the security environment on the Korean Peninsula,” a US military spokesman told Reuters.

Earlier, Pak Jong Chon, secretary of the Central Committee of North Korea’s ruling Workers’ Party, said Washington and Seoul had made a very dangerous decision by extending the exercises, and were “shoving” the situation out of control.

The United States called for a public UN Security Council meeting that is due to be held later on Friday to discuss North Korea, which has long been banned from conducting ballistic missile launches by UN resolutions.

“We urge all countries on the Council and off the Council to condemn these violations of UN Security Council resolutions,” he said.

“We also think it’s important that our partners on the Security Council, including countries who actually helped put these resolutions in place, come on board and help us limit North Korea’s ability to advance these unlawful weapons programs,” he added.

A senior US administration official said on Thursday that although the United States had said since May that North Korea was preparing to resume nuclear testing, it was not clear when it might conduct such a test.

The United States believes China and Russia have leverage to persuade North Korea not to resume nuclear bomb testing, the official told Reuters.

In recent years the UN Security Council has been split on how to deal with North Korea and in May, China and Russia vetoed a US-led push to impose more UN sanctions in response to North Korean missile launches.

The high tensions on the Korean Peninsula come amid concerns that North Korea may be about to resume nuclear bomb testing for the first time since 2017.

In a joint statement on Friday, foreign ministers of the Group of Seven countries said any nuclear test or other reckless action by North Korea must be met with a swift, united, and robust international response.

Mixed marriage citizenship will be taken up with ECHR, say TC unions