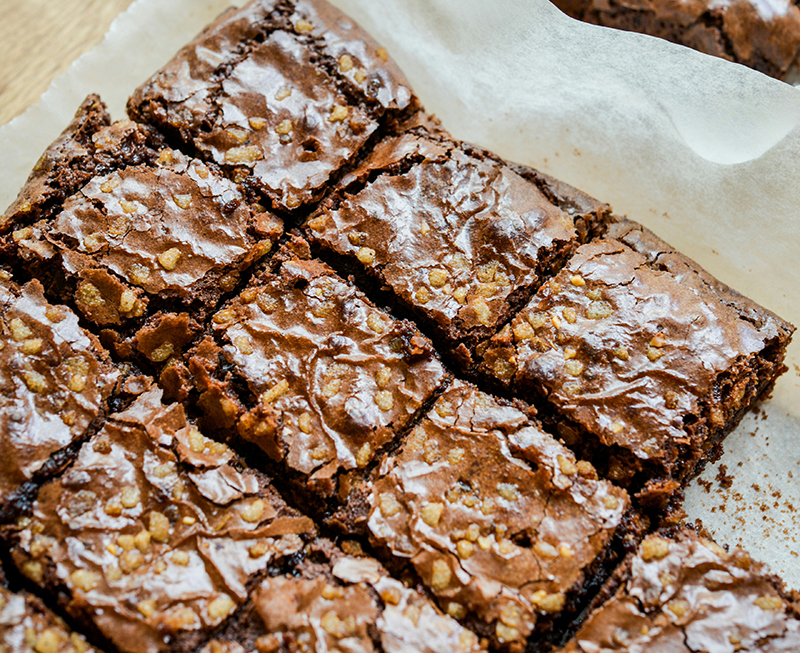 Over 100 years ago the first sweets were made. They are now a popular crowd pleaser easy to adjust to your own preference says ANDRY VOSKARIDOU

A brownie is a small, industrious fairy or hobgoblin believed in English and Scottish folklore to inhabit houses and barns. In culinary terms though, a brownie is a dessert believed to be made in chocolate heaven. Dense yet moist, these heavenly and decadent chocolate squares are ideally crusty on the outside and fudgy on the inside.

We don’t really know who named them ‘brownies’ but during the 19th century (when brownies originated) there was a trend of adding ‘-ie’ to the end of words to annotate cuteness. Hence, we now have the culinary acceptable term “brownies” aka “cute little brown things”.

Legend has it that they were first made at Chicago’s Palmer Hotel in 1893, after Bertha Palmer, a socialite and the wife of the hotel’s owner, requested ‘something like a cake but smaller and eaten by hand’ to be included in lunch boxes sold at the Women’s Pavillion at the famous Chicago Fair. The chefs at the hotel obliged – they created a cake-like dessert with walnuts inside and a delicious apricot glaze on top.

Even though we don’t really have any evidence, we can safely assume that Ms Palmer was pretty happy with the results! Guest at the Palmer Hotel can still taste the exact same recipe.

The recipe in the form we know it today – with chocolate in it that is – first appeared in printed cookbooks in 1904, more specifically in Home Cookery and has since developed through more than 100 years of testing and adjusting the recipe to perfection.

About a year ago, food science journalist Adam Raqusea reported after a series of experiments that he had successfully decoded the secret and analysed the science behind the ‘mythical’ skin of a brownie. That is, the delicious crust forms due to well incorporated sugar in the batter during making it combined with low levels of moisture.

The incredibly popular baked goodies almost everyone loves are unbelievably easy to whip up within a few minutes by those with little experience in the kitchen or provide a base for the seasoned chef to create a luscious dessert.

Possibilities are practically limitless in the creation of brownies – you can add anything you like into your batter to alter the final result and flavour without complicating the recipe further. Just add what your heart desires (like fruits, nuts, flavourings, extracts, candy etc) right before baking it!

My personal favourite are walnuts, not only because they give brownies another dimension with their pleasant crunchiness, distinct texture and flavour but also because it makes me feel less guilty for enjoying brownies on such a frequent basis! 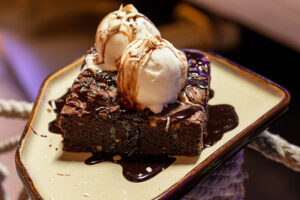 Tips for the perfect brownie

If you like your brownies cake-like use flour or baking soda and mix/whisk them very well. Your brownies will be more like a cake.

If you like them fudgy and gooey use top quality dairy butter and melted chocolate – as a result your brownies will come out denser and fudgier. Also, use a rubber spatula to whisk your batter right about as much needed as to get the ingredients mixed.

And finally, if you like them chewy, always use the right size of pan your recipe calls for – it matters a lot in the end result because the thickness of the batter affects the final texture.

It is preferable that only egg yolks go into your batter (you can reduce waste by using the egg whites for a merengue or a healthy, protein packed omelette).

Melt your butter before using. It will definitely make your brownies heavenly gooey.

Put the brownies in the fridge for at least 2 hours before serving (the more they cool, the stickier they will be) I like serving my brownies warm (gooier and fudgier too!) with vanilla ice cream. You can microwave them for about 30 seconds before serving them if they are cold or were pre-made.

Brownies can last approximately 7 days in the fridge. I personally keep them outside of the fridge at room temperature in an airtight glass container – they last about 3 days. (They never made it that long though!)

Preheat the oven to 180C

Break down the chocolate bar into smaller pieces and melt it in a pot with the butter on low heat while slowly incorporating them. Set aside and let cool a bit.

Beat the eggs and vanilla extract together in a bowl.

In a larger bowl, sieve the flour, cocoa, salt (if using) and sugar together.

Whisk in the eggs mix into the cooled melted chocolate and butter mix, then sift in the dry ingredients. Fold with a rubber spatula to incorporate them – just as much needed to get a consistent mix with no lumps. Do not overmix!

Transfer the batter to the metallic baking tray.

Slice with a sharp knife, then serve with a cup of warm coffee or some ice cream on top!

The Cypriot whose music reaches millions