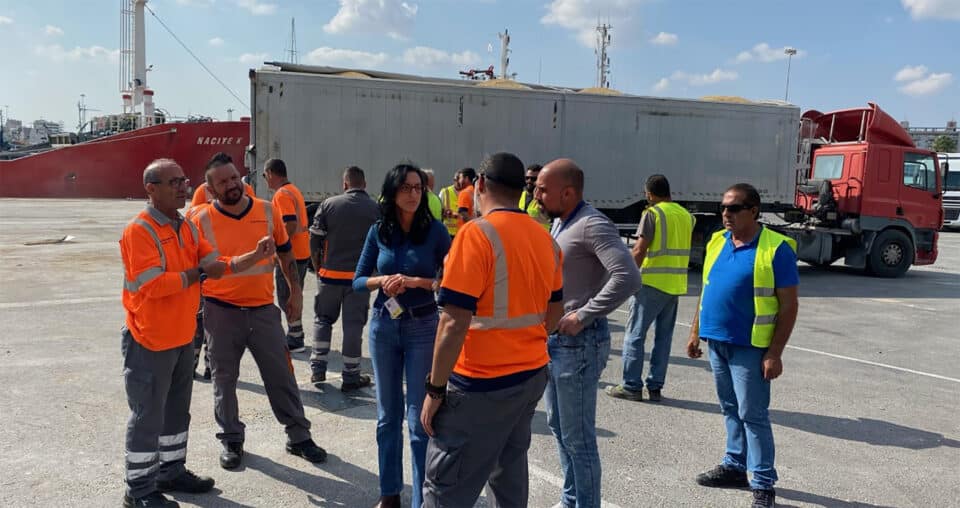 According to an announcement from the trade unions Segdamelin-Peo and Omepege-Sek at a general assembly held on Thursday at Peo’s headquarters in Nicosia, Koushos cancelled a meeting of the Larnaca Port Council scheduled for Friday and instead set a meeting at his office on Monday at 12 noon to resolve the issue of port labour in the presence of the Transport Minister Yiannis Karousos and all parties involved.

Earlier in the day the picketers had held a protest outside the Transport Ministry, where they met with the ministry’s permanent secretary Yiannis Nicolaides.

Nicolaides met with the dock workers outside of the ministry, who told them to go back to work and meet with the labour ministry on Monday over the issue.

Speaking at the protest, the head of PEO’s port workers branch Nadia Kyritsis said that they were there to demand the Larnaca port management company, Kition Ocean Holdings Ltd, stick to an interim agreement they signed with the ministry back in October.

Kyristis said that the company had withdrawn unilaterally from the agreement on Monday, which caused the unions to strike.

The agreement concerns a 50-50 share of port operations between the dock workers and the port’s operators, Kition Ocean Holdings Ltd.

During Wednesday’s strike, Kyritsis said: “The insistence of the company to not follow the agreement with the transport ministry, and which exists at the Limassol port for over five and half years has led us to this impasse.”

She added that if the company agrees to abide by the agreement, then the port workers will begin working again.

On his part Panayiotis Panayi, the head of the SEK port workers union branch, said that they want the same agreement that has been in place in Limassol.

Meanwhile, the founder of the company Panayiotis Alexandrou said that Wednesday’s strike is illegal because the port workers law was not abided by.

“The request of Ms Kyritsis and PEO is unreasonable, illegal and should not be implemented. We recommend today to the ministry of labour and the ministry of transport to take legal measures to end this illegal strike.”

The Cyprus chamber of commerce and industry (Keve) also said that the strike was unjustified.

“This decision of the dock workers and the unions is completely unjustified, irregular and blatantly violates the Industrial Relations Code, as well as the agreement to regulate strikes in essential services. It is not possible for small groups of workers, arbitrarily and without taking into account labour institutions, to cause paralysis of vital sectors of the economy, inflicting great blows on the development of the country,” they said.

The Employers and Industrialists Federation (OEV) has also condemned the work stoppage at the port, saying the strike is taking place in violation of the industrial relations code.