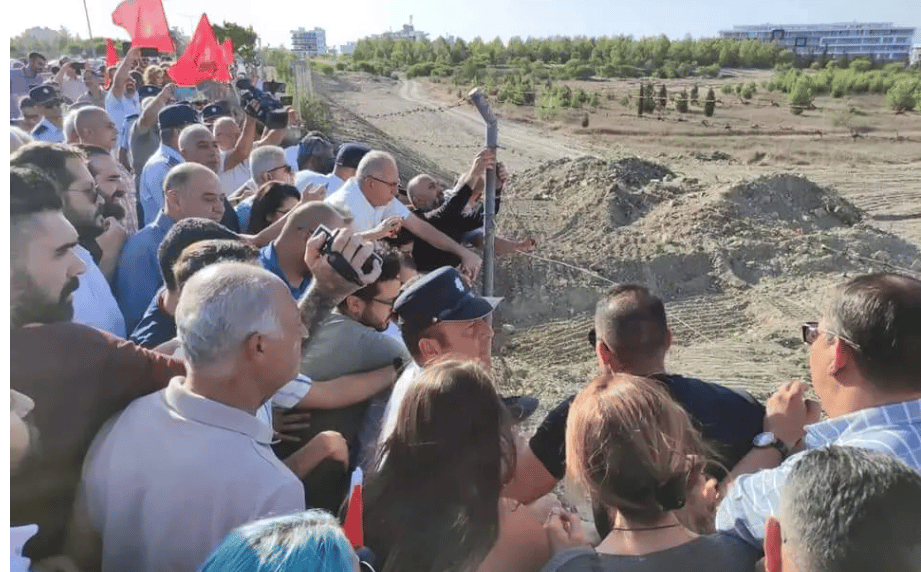 Six days before the Turkish Cypriots were due to mark the 39th anniversary of the unilateral declaration of independence, which paved the way for the establishment of the ‘Turkish Republic of Northern Cyprus,’ they were harshly reminded that their ‘state’ is anything but independent. Worse still they were shown that, in practice, not even Turkey recognises the breakaway state.

This is not something they are unaware of, but the visit of Turkish Vice President Fouat Oktay on Wednesday added salt to the wound. During the visit, Oktay went to inspect the construction site in the Kermia area of Nicosia, where the Kulliye (an Islamic government complex) will be built. No Turkish Cypriot media – not even the ‘state’ broadcaster – were permitted into the area to cover the visit, while a group of protestors were prevented from approaching the site by police.

In comments he made to Turkish state media, which were allowed to cover his visit, Oktay warned that those opposed to the Kulliye, which will include a presidential palace, a parliament building, a mosque and park, would find Turkey against them. Turkish Cypriots staged a protest when the project was announced at the end of September, and it has since come under attack by parties, civil society and media. To add a touch of irony, Oktay described the Kulliye as a “symbol of existence, sovereignty and independence” for the Turkish Cypriots.

The truth is that it is a symbol of Turkey’s sovereignty over the north, discarding any pretence of ‘TRNC’ independence. The decision was taken in Ankara, which will fund the €140 million project, for which it sought none of the necessary permits from the authorities of the north. Mayor Mehmet Harmanci had threatened, a few weeks ago, to seal off the construction site because no building permits had been issued, but he may have thought again about enforcing the law.

The north is being turned into a province of Turkey by President Erdogan, an Islamic outpost 40 miles from the mainland, and the Turkish Cypriots have been painfully aware that it is only a matter of time before they are outnumbered by Turks who are setting up businesses, large and small in the north. They are probably also aware that their only hope of avoiding losing their identity are the Greek Cypriots. Only a settlement could spare them the fate of becoming a small province of Turkey without a say in anything that affects their lives.

Admittedly, it would be over-optimistic to suggest Greek Cypriots would be prepared to come to their rescue, considering that many are comfortable with the status quo and there is no pressure for a settlement on the politicians, who are also happy to keep things as they are. There is also the Turkey factor – Erdogan, who calls the shots, may have decided that partition is a one-way road from which there is no turning back. We will not know before the elections are held in Turkey next year.

The political establishment in the Republic appears to have given up on a settlement some time ago, a choice that does not seem to sit badly with the population. A recent opinion poll conducted for the CyBC found that only 8 per cent of respondents considered the Cyprus problem the most important issue facing the country. This is reflected in the presidential election campaign in which the Cyprus problem is not an issue, only being brought up in the television debates as an excuse for candidates to blame each other for the imminent partition.

None of them, however, talk about the risk to the Greek Cypriots of the north becoming a province of Turkey in all but name. They seem to assume the UN peacekeeping force will remain on the island to police what will be a border with Turkey until kingdom come. Yet, as Foreign Minister Ioannis Kasoulides told the House on Friday, the Turkish army was setting up new posts along the buffer zone and had commando forces on standby.

Greek Cypriots would appear to have as much interest in preventing the annexation of the north by Turkey as the Turkish Cypriots. Our future security depends on there being a settlement, regardless of what form it will take. The objective for both communities should be to reach a deal that would end, or at least restrict Turkey’s presence, political as well as military, in the north. Both communities would be better off if this happens.

Greek Cypriots would have to share power of the central state with the Turkish Cypriots, who will become full EU citizens and no longer have to depend on Turkey’s suffocating presence to secure their future. None of this could happen without Turkey’s agreement, and there could be one last opportunity after the Turkish elections even though there is no guarantee whoever is elected would want to leave the path to partition.

Tales from the Coffeeshop: In memory of the man too smart to seek public approval

Fears that Airbnb regulations are unenforceable