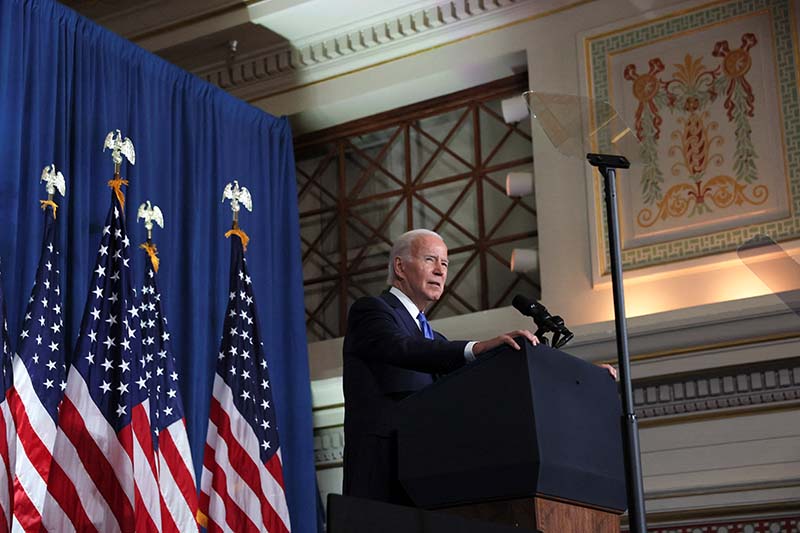 The speeches of the US Trade Representative Katherine Tai are so cautious that it has taken nearly two years to understand the US trade policy of President Joe Biden. There is not much left of trade as usual. Biden has resolved two irritants that were weighing on transatlantic relations with the suspension of reciprocal sanctions linked to the dispute between Airbus and Boeing and the suspension of customs duties on steel and aluminium imports from Europe. But he remains aligned with Donald Trump’s unilateral approach and has stepped up the offensive against the rise of China’s economic power. While America is now displaying assertive protectionism, the US challenge remains to combine this economic isolation with the need to rally as many partners as possible in a technological war against China.

Biden’s campaign promise in 2020 was to “make trade work for workers”. It led him to limit access to the US market. Congress now has cross-party opposition from both Democrats and Republicans to negotiating new trade agreements that would give foreign companies more access to the purchasing power of American consumers – even though they would open up markets for American companies. Confidence in the positive impact of foreign trade on growth thus fell between 2020 and 2022 by 8 per cent among Democrats and 44 per cent among Republicans. There will be no U-turn on the exit of the US from the Trans-Pacific Agreement (CPTPP), which had been decided by Donald Trump, nor will there be a re-engagement of the trade negotiation with the European Union (TTIP), which had also been suspended as soon as Trump took office.

The Biden Administration’s efforts are focused on strengthening national production capacities, through colossal public investments ($550 billion for infrastructures, $280 billion in the Chips and Science Act for research and production of semiconductors, wireless technologies, biotechnologies …). The local content requirements for companies wishing to access this public aid further reinforce economic nationalism at the expense of respect for the World Trade Organization’s principle of non-discrimination. In the Inflation Reduction Act of August 16, the $7,500 tax cut for the purchase of electric vehicles requires thus that they be assembled in the US and that their batteries contain 40 per cent locally mined minerals. An exception has been made for the USMCA partners (Canada and Mexico) but not for the Europeans, Koreans, or Japanese who identify an immediate risk of distortion of competition and question the basis for the friend-shoring advocated by Washington to strengthen economic ties with friendly countries.

Like the EU, Japan and other major trading powers, the United States intends to strengthen the resilience of its value chains by reducing imports of strategic goods that create excessive dependencies on countries that may become hostile, starting with China.

The effort to diversify supply, and prioritise the re-shoring of production in the US, including the re-launching of rare earth extraction in the US, which was abandoned in the 1990s in favour of China, which now has a quasi-world monopoly. But the diversification of supplies from friendly countries is not facilitated by new trade agreements that would offer preferential conditions to American importers. This friend-shoring has an additional cost for US companies compared to Chinese imports or to the preferential conditions that other blocs,

such as the European Union, negotiate in addition to guaranteed access to strategic raw materials.

On the other hand, Biden has not questioned the tariff war initiated by Trump on Chinese imports and continues the strategy of selective decoupling of Chinese production chains. The decoupling is no longer only technological but also financial, with the delisting of Chinese companies from the New York Stock Exchange and filtering of outbound investments that may target China.

New extraterritorial measures, announced just days before the 20th Congress of the Chinese Communist Party, mark an acceleration of decoupling and a considerable escalation in the conflict. It now bans all exports of semiconductors to China or support for Chinese semiconductor production, with immediate effect on the evening of October 7 of the withdrawal of US citizenship from any person concerned.

Biden is no more in favour than Trump of regulating international trade through multilateral rules. Washington maintains its veto on the appointment of new arbitrators to the Appellate Body of the World Trade Organization (WTO) dispute settlement mechanism. This undermines compliance with existing rules and limits the appetite of WTO members to agree on new rules whose implementation would not be guaranteed through arbitration. Nor is the United States contributing to a reform of the WTO that would strengthen the institution.

This disengagement from multilateralism gives China the opportunity to more actively promote its vision of globalization «with Chinese characteristics»: economic globalization without reference to democracy, human rights and civil rights. While Beijing is trying to win over the emerging economies to its model of globalization against the liberal international order established by the Western powers since World War II, Washington is focusing on limiting the rise of Chinese technological power.

In order to guarantee its technological leadership, the United States cannot limit itself to the economic nationalism that has been put in place and to prohibiting the access of Chinese companies to American technologies. It is also necessary to limit the cooperation of third countries which could strengthen the Chinese capacity for innovation. The US protectionist turn could also limit US competitiveness if Biden does not get key partners like the Europeans, Canadians, Japanese or Australians to align with his strategy of decoupling from China. Without the prospect of privileged access to the US market that a trade agreement offers, third countries have less incentive to align themselves with US policy choices, whether it is to adopt the same restrictions on exports of certain technologies to China or to adopt US standards. Biden’s America no longer negotiates bilateral or multilateral rules. Instead, it favours consultation on the adoption of common instruments (such as foreign investment controls) or common standards, particularly in the digital sector, with strategic partners gathered in forums such as the Trade and Technology Council between the United States and the European Union (TTC) or the Indo-Pacific Economic Framework for Prosperity (IPEF), which brings together 13 countries. These alliances should help limit the internationalization of Chinese standards. The challenge for countries, such as those in the European Union or Southeast Asia, which are highly integrated into both the Chinese and American markets and which are being pressured to opt for one of the two regulatory spaces, will be all the more complex because the value chains of intermediate goods are very complex and highly integrated. The US can decouple from China, but it is more difficult

to decouple the rest of the world from China. The security guarantee provided by US military power may determine some countries to align themselves with US strategy.

But it remains to be seen whether friendly protectionism is not just an oxymoron that will push the US under Biden’s presidency or his successor to be more offensive by increasing the pressure on its friends to align themselves with American interests.

Changing fortunes of the church in Cyprus