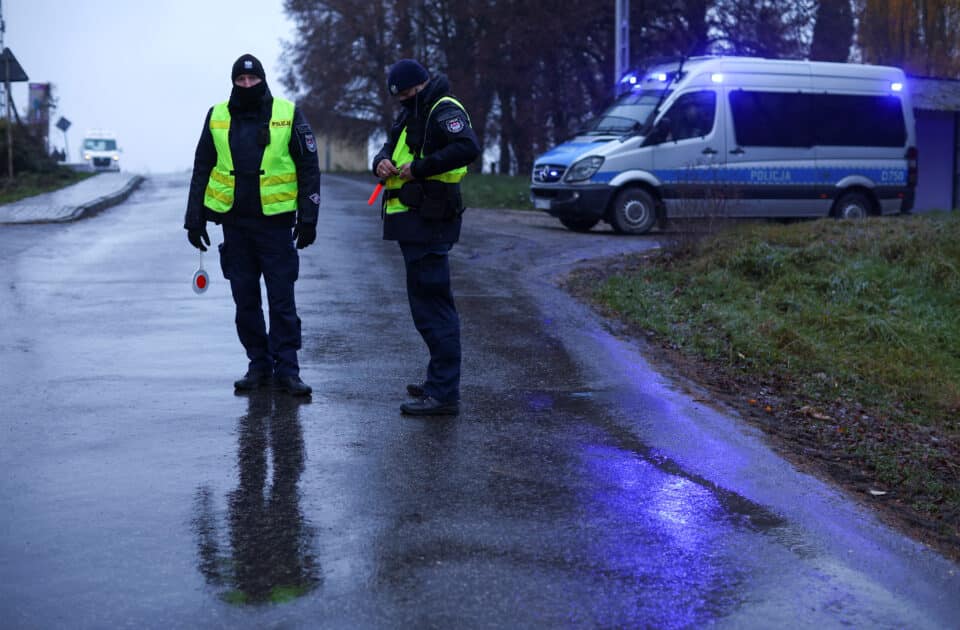 Police officers stand at a blockade after the explosion in Przewodow

A missile that killed two people in Poland was probably not fired from Russia, U.S. President Joe Biden said on Wednesday after holding talks with leaders of Western allies amid concerns the Ukraine conflict could spill into neighbouring countries.

The explosion on Tuesday at a grain facility near the Ukrainian border came as Russia unleashed a wave of missiles targeting Ukrainian energy infrastructure, attacks that Kyiv said were the heaviest in nearly nine months of war.

The Polish foreign ministry said the rocket fell on Przewodow, a village about 6 km (4 miles) from the border with Ukraine.

According to U.S. officials, initial findings suggested that the missile that hit Poland was fired by Ukrainian forces at an incoming Russian missile, the Associated Press reported, having earlier cited a senior U.S. intelligence official as saying the blast was due to Russian missiles.

Polish President Andrzej Duda had also told reporters earlier that it was “most likely a Russian-made missile”, but there was no concrete evidence of who fired it, and the incident was a one-off.

A resident who declined to be identified said the two victims were men who were near the weighing area of a grain facility.

Russia’s defence ministry denied that any Russian missiles hit Polish territory, describing such reports as “a deliberate provocation aimed at escalating the situation”. Kremlin spokesperson Dmitry Peskov said he had no information on an explosion in Poland.

“There is an attempt to provoke a direct military clash between NATO and Russia, with all the consequences for the world,” Dmitry Polyansky, the head of the permanent mission of Russia to the United Nations, said on his Telegram channel.

Any Russian strike on Poland could risk widening the conflict between Russia and Ukraine as members of the North Atlantic Treaty Organization (NATO) are committed to collective defence under its Article 5.

Biden convened a meeting of several leaders gathered in Bali, Indonesia, for a G20 summit to discuss the incident. Leaders from NATO members Germany, Canada, Netherlands, Spain, Italy, France and Britain attended, as well as non-NATO member Japan and representatives from the European Union.

Asked whether it was too early to say if the missile was fired from Russia, Biden said: “There is preliminary information that contests that. I don’t want to say that until we completely investigate it, but it is unlikely in the lines of the trajectory that it was fired from Russia but we’ll see.”

The United States and NATO countries would fully investigate before acting, Biden said.

NATO ambassadors are expected to meet later on Wednesday.

Polish officials in Warsaw said that their government was likely to request a NATO meeting under the treaty’s Article 4 for consultations among the allies, and also raise the issue at a U.N. Security Council meeting on Wednesday.

Meantime, leaders of the Group of 20 (G20) major economies issued a declaration on Wednesday saying they “deplore in the strongest terms” Russia’s aggression against Ukraine. It said most members strongly condemned the war in Ukraine but added that there were other views within the group.

The explosion in Poland came as Russia pounded cities across Ukraine with missiles. Some hit Lviv, which is less than 80 km (50 miles) from the border with Poland.

Ukrainian President Volodymyr Zelenskiy said Russian missiles hit Poland in a “significant escalation” of the conflict. He did not provide evidence of Russia’s involvement.

“All of Europe and the world must be fully protected from terrorist Russia,” he said in a tweet after a phone call with Poland’s President Duda.

Polish Prime Minister Mateusz Morawiecki said Poland was increasing the readiness of some military units, and called on all Poles to remain calm.

Biden told Duda in a call that Washington has an “ironclad commitment to NATO” and will support Poland’s investigation, the White House said.

The State Department described the earlier report that it could have been a Russian missile as “incredibly concerning.”

Other Western allies said they were monitoring the situation, and urgently assessing information.

Latvian Deputy Prime Minister Artis Pabriks said the situation was “unacceptable” and it could lead to NATO providing more anti-aircraft defences to Poland and Ukraine.

Lithuanian President Gitanas Nauseda said on Twitter: “Every inch of #NATO territory must be defended!”

Ukrainian Defence Minister Oleksiy Reznikov said Kyiv had warned of the danger Russian missiles posed to neighbouring countries and called for a no-fly zone to be imposed.

“We were asking to close the sky, because sky has no borders. Not for uncontrolled missiles. Not for the threat they carry for our EU & NATO neighbours. Gloves are off. Time to win,” he said in a Twitter post.