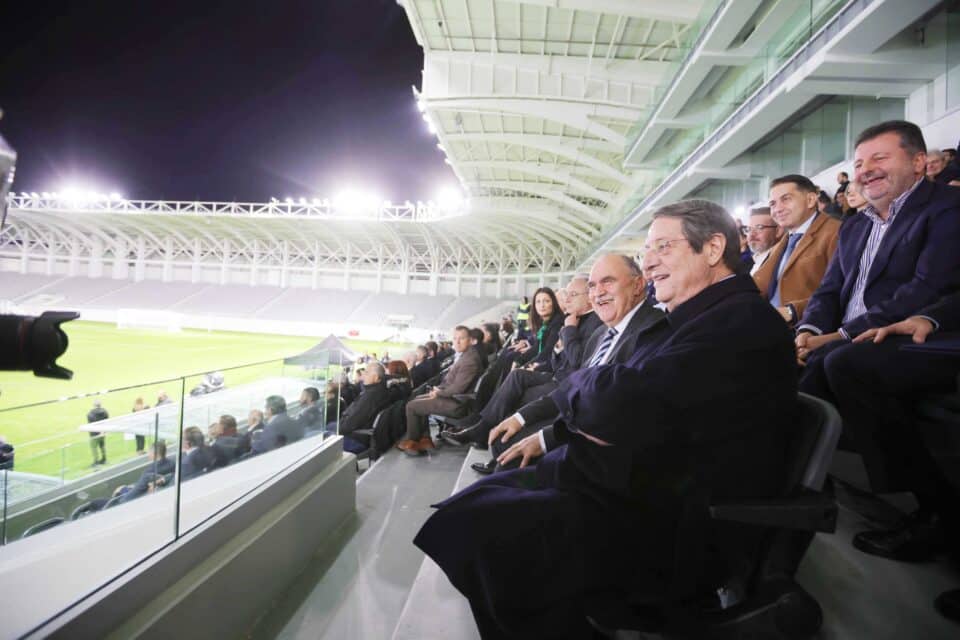 President Nicos Anastasiades on Friday toured his home turf of Limassol, to witness the new projects that have flourished during his administration with the highlight being the inauguration of the new Limassol stadium in the evening.

At the same time, he highlighted the importance of English language learning, if Limassol and the island’s other towns want to be serious players in the creation of jobs at multinational companies that are setting up base there.

Congratulating the mayor for the developments that have transformed Limassol, Anastasiades said the government has supported local authorities in projects aimed at boosting cities.

“We fought hard to win EU funds to revitalise our recovery from a financial crisis, so as to be announcing projects from 2015,” he said.

In the past 10 years, there have been 79 projects implemented in Limassol, at a cost of €490 million. So far, projects worth €231m have been completed, including boosting the road networks in Limassol. the construction of a wastewater plant in Vati, renewing Tepak’s university library and the Franklin Roosevelt Avenue works.

“Limassol has transformed into a city that has nothing to envy from other EU countries, or the possibilities it has in all sectors to further develop it,” Anastasiades noted.

His last visit of the day, the highlight, was to the new Limassol stadium, which he inaugurated during an emotional speech.

“I feel that today is a historic day for Cypriot football, and for sports in general, and is the culmination of the efforts that began in 2014 when the three historic teams of Limassol joined forces, decided that they should overcome the previous problems and thus give the possibility for the state to take responsibility for the construction of this truly magnificent stadium which will host the three teams and not only, but also the national teams and those of the other teams who would like to use it,” Anastasiades concluded.

Earlier he had also inaugurated the Adult Employment Centre, and visited the Municipal Centre for Communal Programmes Municipal Apartment Buildings.

He then laid the foundation stone at the B’ Technical School in Limassol, and at noon inaugurated the Post-Secondary Professional Training Institute.

“No one can ignore the fact that in the last few years, there has been an observed increase in tourism and business activity in the city, attracting new investments, creating new job opportunities and consequently brought a number of benefits in the financial, commercial, tourism and cultural level,” he said.

The budget provides for the construction of a new wing, as well an outdoor sports and entertainment area. The broader aim is to ensure schools are modern, educational, functional and safe places for learning, Anastasiades said.

In the afternoon, the president inaugurated the Cyprus University of Technology’s Department of Fine Arts’ new classrooms and the administrative offices.

“The current government has shown and will continue to show until its last day in power, for education and for the further upgrading of Tepak,” Anastasiades said.

Anastasiades stressed that knowledge of the English language would facilitate young scientists in the labour market, noting the great interest from multinational companies in Cyprus.

“I heard what I have passionately supported since 1991, that the English language is among those that must be introduced in universities because in this way it allows cooperation with other universities abroad.”

“When we invest or when the headquarters of large companies are moved to Cyprus and they need Tepak graduates, is English necessary or not? How will they get along? Shall we oblige giant companies to learn Greek so that they can communicate with our graduates, our scientists? Because the high level of education provided cannot be ignored,” he said.

Addressing the MPs present, he invited them to consider the issue as soon as possible for the progress of both the University of Cyprus and Tepak, taking into account, as he said, the competition between private and state universities.

Therefore, I appeal to the House of Representatives to move forward, so that a backlog that has existed for years can be overcome.”

Meanwhile, in light of the island’s place in the shipping world, the president hailed the creation of the department of maritime science.

“It is something that was missing and will significantly contribute. Suffice to say that Cyprus is third in ship management in Europe and 11th worldwide. Therefore, it is an absolutely necessary educational service that will be offered to our young people and I am sure that the new government, whoever it is, will be on the side of local education,” he noted.