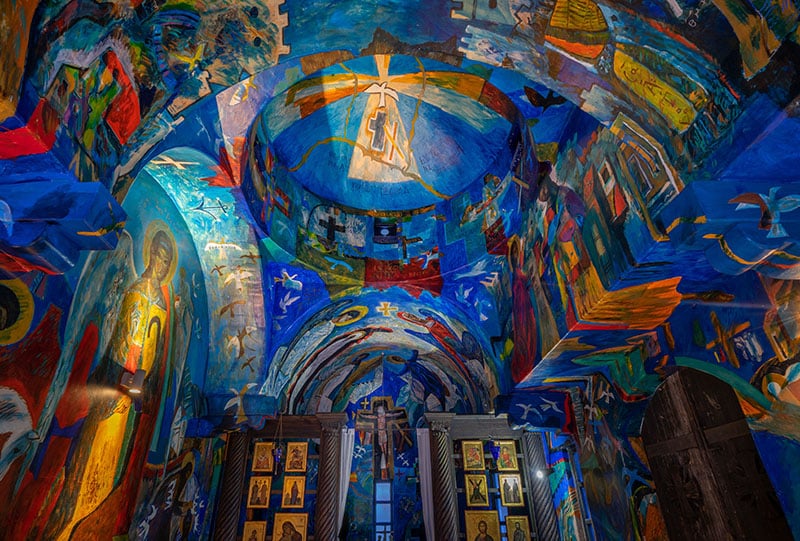 Christianity and Cyprus are inextricably linked, as is evident from the countless monasteries, churches and chapels dotted across the island, showcasing exquisite treasures and artwork that bears witness to hundreds of years of Christian cultural life.

But, it is incredibly gratifying to stumble upon a remote church in a serene setting and find unexpected masterpieces inside.

The All Saints Chapel in Pissouri is a homage to the numerous early Christian and mediaeval churches around Cyprus, with its traditional stone-built architecture, hemispherical dome and miniature bell tower.

Located in the village of Pissouri, on the western end of the Limassol countryside, this chapel is a piece of art with striking paintings that cover the whole interior of the building.

The All Saints Chapel, which is situated on the grounds of the Columbia Beach Resort, was the brainchild of hotel owner Heinrich Schoeller who envisioned a chapel that would reflect the culture of the pre-historic civilizations in the area and the Christian traditions of later years.

“I was lured to Pissouri Bay as early as 1970 for its rugged headland and unspoiled beaches,” Schoeller said. “It was always an ambition of mine to build a resort in this breath-taking location that respects and enriches the local Cypriot craftsmanship and culture.”

According to Schoeller, the inclusion of a small, traditional chapel by the sea would offer visitors and pilgrims “a unique lifetime experience.”

Since the dawn of time, man has adorned the walls of caves and temples with symbols, writings and artwork. “This tradition also continued later into the Byzantine period, and many of the churches in Cyprus are exquisitely decorated with icons and frescoes, celebrating Christianity throughout its two-thousand-year history,” he added.

When the chapel was completed, Schoeller asked painter John Corbridge, one of the most celebrated local artists, to undertake the painting of the church.

Corbridge, from Sheffield, moved permanently to Cyprus, settling in Kyrenia in the late 1960s after falling in love with the country. He was enamoured with the blue colours of the Mediterranean, and has held numerous exhibitions across the island and worldwide depicting various facets of Cypriot life including the war. He lost his house and studio in the north following the 1974 Turkish invasion.

He was the obvious choice, according to Schoeller, because of his youthful spirit, the clarity of his line “as well as his ability to accurately record historical and religious references in his work.” 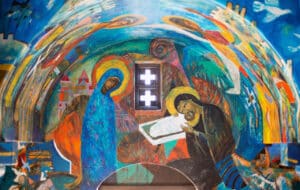 By paying close attention to detail and being sensitive both as a person and an artist, Corbridge was able to introduce new horizons to Cypriot art. “With his unique talent for harmonising subjects and backdrop, surface and colour, and producing a strong but pleasant mood with skilled use of light and shade, he gave iconography an entirely new dimension,” he added.

Saints, angels, the Virgin Mary and images of Jesus Christ are depicted on the chapel’s walls and ceiling. Although they clearly share characteristics with Byzantine iconography, they employ modern techniques and lines that are fresh and entirely original, incorporating elements from more freehand artistic tendencies. “The figures appear to be diving into Pissouri’s deep blue waters as they float across a vibrant blue background,” Schoeller said.

Although Corbridge passed away in 2003, his legacy and creative work are still on display at the church today.

“Masterpieces like this chapel are rare,” Schoeller said. “Next time you are visiting the Columbia Beach Resort in Pissouri you have to take a seat, sit back and relax, to fully absorb the beauty and energy of Corbridge’s timeless work of art.”