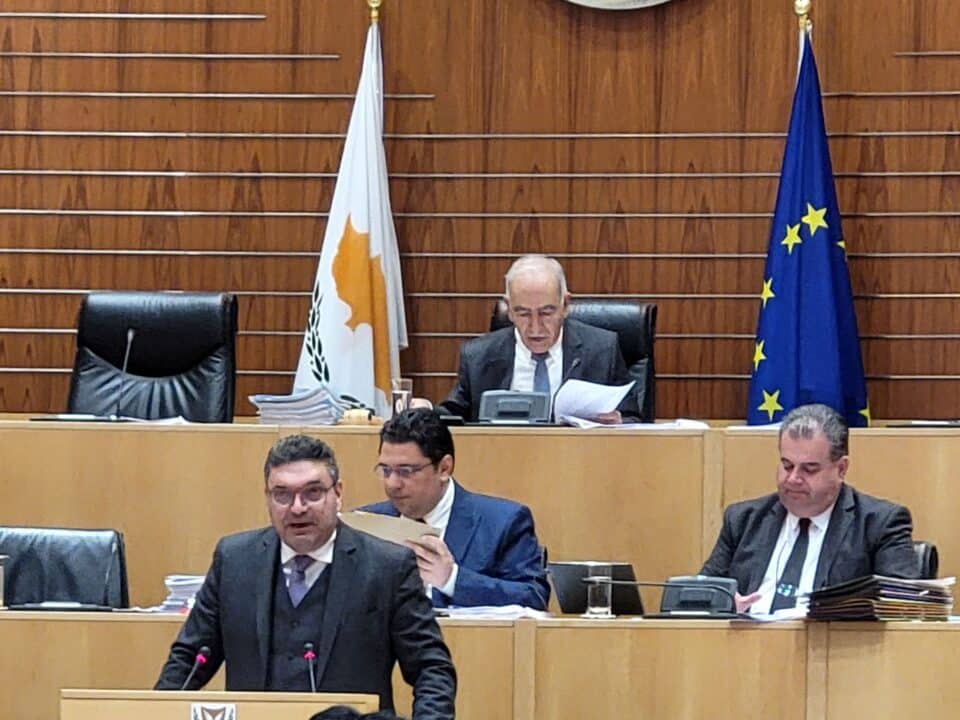 Finance Minister Constantinos Petrides on Friday addressed the House plenum during his presentation of the government’s economic policy for the coming year, saying that the current administration is submitting a balanced budget for 2023, designed and adapted to an era of geopolitical instability.

Referring to the difficult economic situation of the country in 2013, he said that ten years later and despite the adversities and successive crises “we are today submitting a balanced budget and delivering, most importantly, a healthy and robust economy”, fully integrated and at the core of the Eurozone, with high growth rates, low unemployment, fiscally balanced and public debt below 90 per cent of GDP, with a steady downward trend.

Petrides referred to the beginning of a new difficult era for the global economy, characterized by geopolitical instability with major effects on the concentration of production.

“It marks the beginning of de-globalisation with security playing a more decisive role in the accumulation of capital and investment,” he said, noting that cheaper labour costs previously held a more significant role in economic decision-making.

Moreover, according to the Finance Minister, the new economic era includes the end of cheap money and low interest rates, the end of cheap energy, combined with the drastic restructuring of the labour market and a strict attitude on behalf of the markets, with the sustainability of public finances having a more prominent role than in the past.

“For this very reason, we have adjusted the budget you have before you accordingly. It is a budget that has all these tools with which the Cypriot economy will be able to effectively face the great challenges of the new era in the economy,” he said.

In addition, Petrides noted that despite the financial consequences that the economy has been dealt with by the crises of the Covid-19 pandemic and the invasion of Russia in Ukraine, despite the uncertainty and challenges, the budget seeks to implement important projects which are expected to have a significant contribution to the economic development of Cyprus and, by extension, fortifying the economy and boosting its future resilience.

A feature of this year’s budget is the increase in expenses, but at the same time a reduction in the cost of servicing the public debt, added Petrides, noting that it includes an increase in primary expenses compared to last year by approximately €554 million.

“The increased expenses aim to promote the development prospects of the economy, which is our response to the crisis,” he said.

The budget includes appropriations for development projects, which are increased by approximately 12 per cent compared to the budget from 2022.

What is more, appropriations for social protection have also been increased, rising by approximately 4 per cent.

“The social safety net cannot be compared to the past,” Petrides said.

“It has been significantly expanded, through the introduction of the Minimum Guaranteed Income and the national healthcare system (Gesy), but also by granting targeted allowances,” he added, noting that social welfare appropriations amount to €760.5 million, reflecting an increase of 0.4 per cent compared to the 2022 budget but a more noticeable 21 per cent increase compared to the 2018 budget.

He stressed that the expenses for servicing the public debt, interest and loan repayments, are €500 million lower than last year.

“This is a result of the proper management of the public debt,” Petrides said.

“Despite the financial crisis, through a prudent debt management policy, we have created financial buffers, which are being used today for the targeted support of households and businesses to deal with the effects of inflation, with the amount of support exceeding €400 million in 2022,” he added.

The Finance Minister explained that the plan is based on realistic and conservative macroeconomic forecasts.

The Cypriot economy is expected to grow at a rate of around 6 per cent in 2022, in real terms, meaning that the estimate takes into account the impact of inflation.

“The growth rate of the economy during the third quarter of 2022 reached 5.5 per cent, compared to the corresponding quarter of 2021, which is the highest among the EU member states, and more than twice the average of both the Eurozone and the EU, which are estimated at 2.1 per cent and 2.4 per cent respectively,” Petrides noted.

“We disproved, not only the Cassandras at home, who insisted that we were going into a recession but also the EU’s own forecasts of 2.3 per cent growth,” he added.

Furthermore, Petrides said that in the medium term, the economy’s growth rate, in real terms, will slow to around 3 per cent in 2023, before rising to 3.3 per cent in 2024 and 3.2 per cent in 2025, while it is certain that some EU countries will suffer a recession.

Petrides said that in 2022 the unemployment rate is expected to decrease to around 7 per cent, compared to 7.5 per cent in 2021.

“This is an unemployment rate equivalent to full employment conditions and which allows the implementation of yet another major social reform of this government, the introduction of the minimum wage,” he said.

The fiscal surplus is projected to widen during the three-year period 2023-2025, reflecting a percentage of GDP of 1.7 per cent, 2.3 per cent and 2.3 per cent respectively, according to the data provided by Petrides, who noted that the forecasts are valid “if of course the appropriate policies are followed”.

“The government does not create reserves. The easiest thing would be to take a populist stance and use the economy as a spoil for the elections,” the minister said.

“On the contrary, an arsenal is being built to deal with the difficulties that are coming so that the government can respond to those needs just as it did in practice during the pandemic crisis and also during the inflation crisis,” he added.

Petrides went on to say that “the emergency aid packages that we were able to make available to households and businesses during the three recent crises exceed €4 billion in total”.

He added that the protection of households, businesses and future generations is being created, while also building credibility “which is more necessary than ever in this difficult era we are entering, in which the sustainability of public debt becomes more significant”.

The Finance Minister also said that the upgrading of the Cypriot economy in the midst of very difficult conditions is mainly attributed to the reduction of the public debt but also to the “strong commitment of the government to a systematic policy of fiscal discipline”.

“Continuing in this direction is imperative so that other upgrades of the economy will follow”, he added, stressing that additional upgrades are expected to lead to an improvement in the state’s borrowing conditions and a reduction in the cost of servicing the public debt, allowing for more money becoming available for social and development policies.