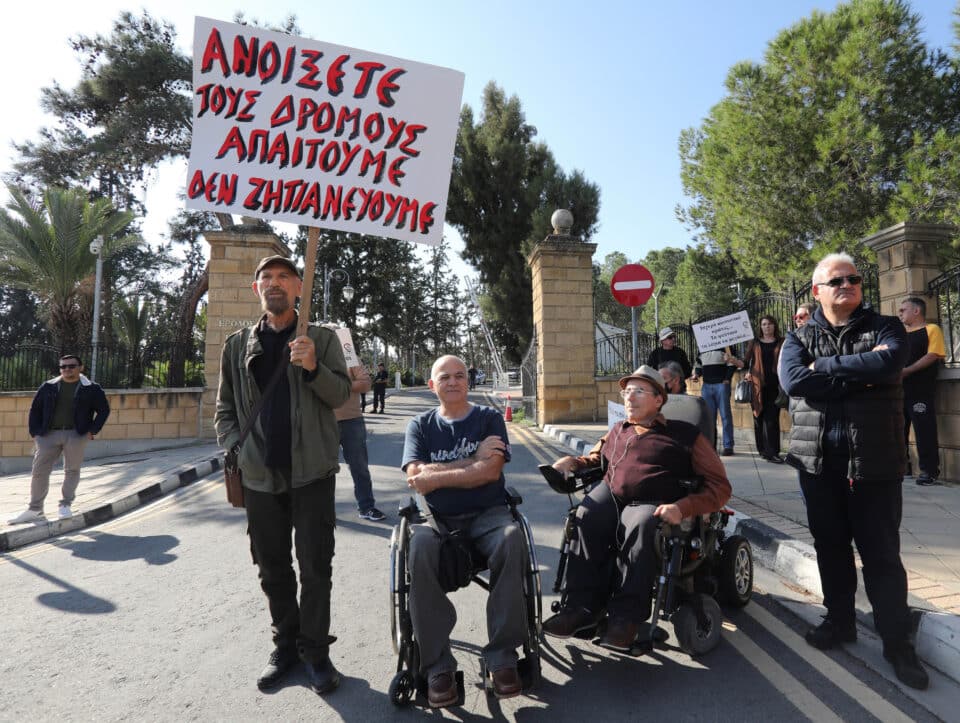 The protesters and their supporters expressed dissatisfaction with how the government has handled various issues of concern, with slogans such as: “No to exclusion, yes to recognition and respect”, “Segregation is not for the good of children”, “No to the dismantling of the welfare state” and “The right of disabled children to inclusive education is non-negotiable.”

Presidential spokesman, Andreas Iosif, responded to the protesters, saying that he had listened carefully and that their requests would be forwarded to the president, and offered assurance that “solutions will be found.”

Iosif added that during the ten years of President Anastasiades’ government, measures in the right direction, such a national strategy for the disabled and for households on benefits had been taken, with the goal to create an effective welfare state in an inclusive society.

President of the Confederation for the Disabled (Kyosa), Christakis Nicolaides, for his part, said the fight for socio-economic integration of people with disabilities will continue.

“Unfortunately, our country continues to persist in anachronistic […] policies, excluding people with disabilities from many areas of life,” Nicolaides said.

Cyprus is unfortunately far behind in terms of rights, benefits, services, and programs for, Nicolaides claimed, accusing the state of empty promises and backtracking.

“The situation of human rights is worse than it was when our country ratified the United Nations Convention in 2011,” he said.

Among the imperative goals is to ensure active and full involvement of citizens with disabilities in the decision-making processes on issues that concern them, Nicolaides added, saying deinstitutionalisation and integration as well as improving career and employment prospects are key. Nicolaides further expressed dissatisfaction with what he referred to as the downgrading of public transport.

Elsewhere, the Paraplegics Organisation issued a statement on the occasion of International Day of the Disabled, coming up on December 3, in which it demanded equal participation and integration in every aspect of life.

“Ensuring the right to participate in public life is a basic condition for real democracy and reduction of inequalities,” the statement concluded.