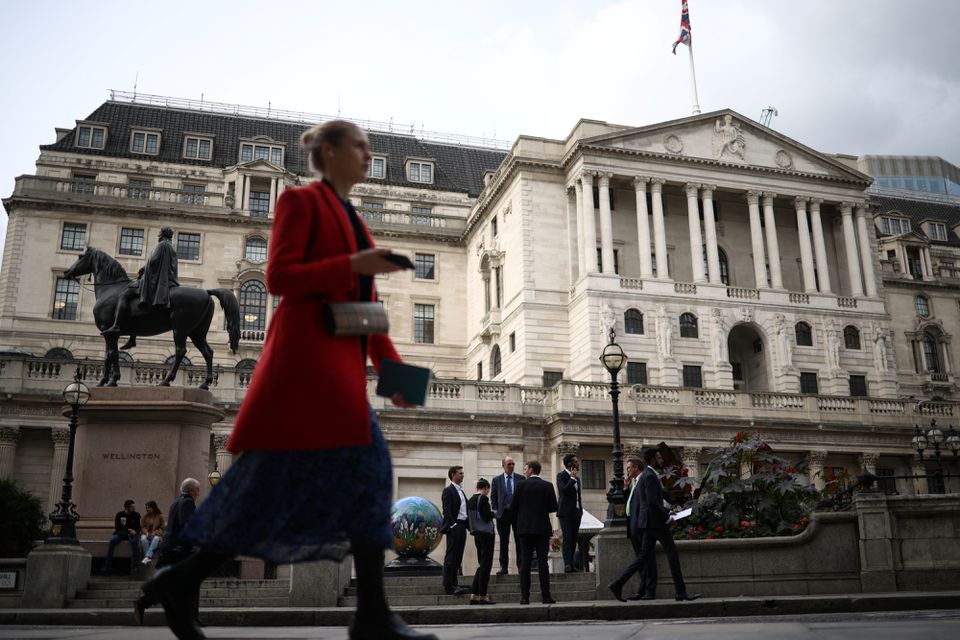 People stand outside the Bank of England in the City of London financial in London, Britain, October 3, 2022. REUTERS/Henry Nicholls

The Bank of England will add another 50 basis points to Bank Rate next week and take borrowing costs to 3.50 per cent, despite the economy falling into recession, as it battles inflation running at more than five times its target, a Reuters poll found.

As in much of the world, inflation in Britain has been rampant, elevated by surging energy costs following Russia’s invasion of Ukraine which has also further disrupted supply chains still healing from the coronavirus pandemic.

Prices rose 11.1 per cent in October from a year earlier, the steepest increase in 41 years. That has added to consumers’ woes as they are also facing a record hit to living standards after the government introduced a tough budget to try to restore Britain’s fiscal reputation.

The country is facing a winter of discontent as workers from rail staff to teachers and nurses take industrial strike action to demand better pay.

BoE rate-setter Swati Dhingra said in an interview published on Saturday higher interest rates could lead to a deeper and longer recession, adding there were few signs demands for higher wages risked a wage-price spiral.

One of the first major central banks to start unwinding the ultra loose policy adopted globally during the pandemic, the BoE went for a 75 bp lift last month but was expected to add a more modest 50 on Dec. 15 according to all but two of the 54 economists surveyed Dec. 5-7.

“Almost a year to the day after the BoE began this tightening cycle, it looks set to deliver another Christmas hike,” said Elizabeth Martins at HSBC.

Only two economists expected a 75 bp increase next week compared to 13 of 56 in the Nov. 23 poll.

The US Federal Reserve is also expected to shift down to a 50 bp move this month after four consecutive 75 bp increases, a separate Reuters poll found.

After next week’s move, the BoE will add another 50 bps in the first quarter and 25 bps in the second, with medians showing Bank Rate peaking at 4.25 per cent then. Forecasts for the terminal rate ranged from 3.50 per cent to 4.75 per cent.

In last month’s survey, Bank Rate was expected to peak at 4.25 per cent next quarter and there was a big divide between economists in the latest survey as to when and where it would level out.

Britain is almost certainly heading into a recession, with economists giving a median 85 per cent chance of one within a year.

A majority of respondents to another question said the recession would be long and shallow.

Those forecasts were little changed from last month but when asked about the risks to their GDP forecasts, 12 of 18 said it was to the downside. Across this year the economy was predicted to expand 4.4 per cent but then contract 0.9 per cent next year before returning to 0.9 per cent growth in 2024.

“2023 will be a tough year for the economy as the effects of the previous rises in inflation and previous hikes in interest rates are felt,” said Paul Dales at Capital Economics.

“The good news is that we think the recession will end in the second half of 2023 and a gradual fall in inflation will probably allow the Bank of England to inject more vigour into the recovery by cutting interest rates in 2024.”

Inflation was seen peaking at 10.9 per cent this quarter, higher than the 10.7 per cent estimate given last month before drifting down. However, it won’t reach the Bank’s 2.0 per cent goal until the third quarter of 2024.