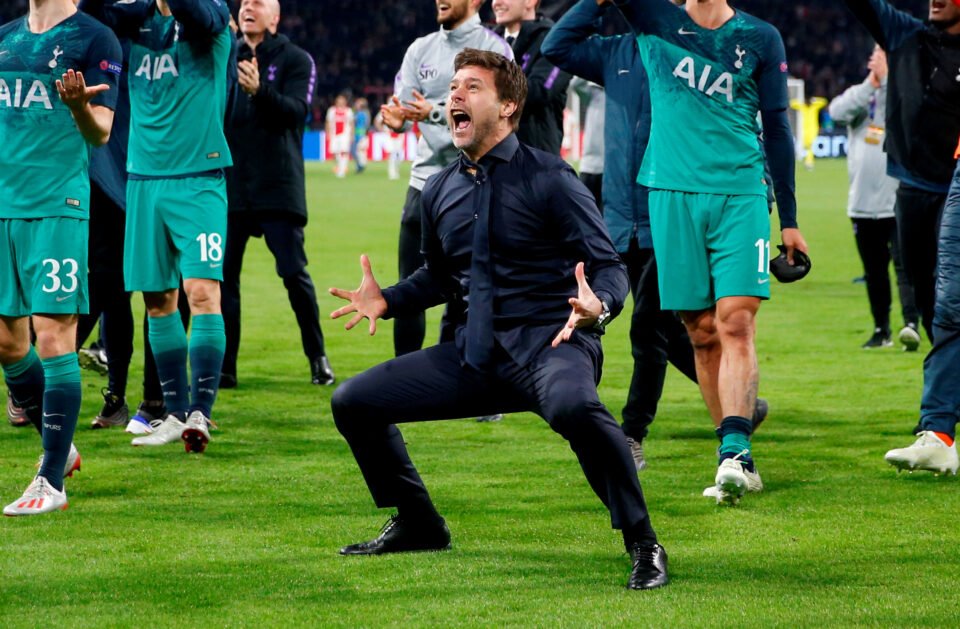 FILE PHOTO: Tottenham manager Mauricio Pochettino celebrates after the Ajax match that sent his former team Tottenham to the final of the Champions League

Pochettino, who played for PSG as a defender in the early 2000s and also captained the side, has been out of a job since being dismissed by Spurs in November 2019, a few months after guiding the north London club to the Champions League final.

The 48-year-old Argentine said he was honoured to take on the role and that the Parisian club “has always held a special place in my heart”.

“I return to the club today with a lot of ambition and humility, and am eager to work with some of the world’s most talented players,” Pochettino, who has an option for a one-year extension in his contract, said in a statement .

“This team has fantastic potential and my staff and I will do everything we can to get the best for Paris Saint-Germain in all competitions.

“We will also do our utmost to give our team the combative and attacking playing identity that Parisian fans have always loved.”

Pochettino’s first game in charge will be a trip to St Etienne on Jan. 6 when the league resumes following the winter break.

PSG have 35 points from 17 games, one point behind league leaders Olympique Lyonnais and Lille, and are through to the last 16 of the Champions League where they face Spanish side Barcelona.

“The return of Mauricio fits perfectly with our ambitions and it will be another exciting chapter for the club and one I am positive the fans will enjoy,” PSG chairman and CEO Nasser Al-Khelaifi said.

“With the appointment of Mauricio Pochettino, Paris Saint-Germain is committed to continue to build and move the club forward over the coming years.”

“In this club it’s always been about excellence, the players have to deserve to wear the jersey,” Pochettino, who played for PSG as a defender in the early 2000s and also captained the side, told the club’s website. “I think that it’s a fantastic squad and I think that we can accomplish what this club and the players want because they are competitors and they want to lift trophies.”

Pochettino will take his first training session on Sunday.

* The centre back began his playing career with Newell’s Old Boys in 1988, making his debut at the age of 16.
* Claimed his first piece of silverware in 1991 when Newell’s were crowned champions of the Argentine Primera Division.
* Signed for Spanish side Espanyol in 1994, making more than 200 appearances and winning the King’s Cup before joining Paris St Germain in 2000.
* Made his Argentina debut in 1999 and went on to earn 20 caps, playing in the 2002 World Cup, where he conceded a penalty that David Beckham scored in England’s 1-0 group stage victory.
* Left PSG for Girondins Bordeaux in 2003, but struggled to settle in the south of France and rejoined Espanyol on loan during the second half of the season.
* Dubbed the ‘Sheriff of Murphy’ because of where he grew up, Pochettino joined Espanyol permanently after the 2003 season and won a second King’s Cup in 2006 before retiring at 34.

* Following his retirement from playing, Pochettino took his coaching qualifications and had a stint as assistant manager of Espanyol’s successful women’s side.
* In January 2009 at the age of 36, he took charge of third-bottom Espanyol and took them to a 10th-place finish in La Liga.
* Espanyol ended in mid-table in each of the following two seasons, just missing out on qualifying for the Europa League in 2011 after spending much of the campaign in the top five.
* Although they slipped to 14th the next season, Pochettino developed a reputation for bringing young players through the academy.
* At the start of the 2012-13 season, Pochettino expressed concerns about the club’s financial situation, and with the team bottom of La Liga, he left by mutual consent in November 2012.

* Pochettino replaced Nigel Adkins as manager of Premier League Southampton in January 2013 as the south-coast club looked to stay up after promotion the previous season.
* Despite being relatively unknown in England, Pochettino guided the club to a 14th-place finish after adopting a high-pressing, attacking style of play.
* The Argentine continued his philosophy of developing home-grown talent with England’s 18-year-old left back Luke Shaw bursting on to the scene, while the likes of Adam Lallana and Jay Rodriguez also flourished under him.
* After a solid start to the 2013-14 season, Pochettino led them to eighth, their highest ever finish in the Premier League at the time.
* With a year left on his contract and uncertainty surrounding the future of key players, such as England internationals Shaw and Lallana, Pochettino decided to join Tottenham Hotspur, where he became the second Argentine to manage the club after Osvaldo Ardiles.

* Pochettino was appointed Spurs head coach on a five-year deal for the 2014-15 season to replace Tim Sherwood. He became Tottenham’s 10th manager since 2001 under chairman Daniel Levy.
* Spurs finished fifth in his first season and reached the final of the League Cup. They then battled 5,000-1 outsiders Leicester City for the title in 2015-16 but the Foxes won the race while the London club finished third to claim a Champions League spot for the first time since 2010-11.
* Pochettino continued to foster young players and the likes of Harry Kane, Dele Alli, Eric Dier, Danny Rose, Kieran Trippier and Harry Winks all blossomed at the club and with England.
* The Argentine penned a new five-year deal in May 2016 and Tottenham maintained their upward trajectory, finishing second and then third again over the following two campaigns as well as reaching the Champions League last-16 in 2017-18.
* Fan-favourite Pochettino, dubbed ‘Magic’ by the Tottenham faithful, signed another five-year contract in May 2018 as Levy put his faith in the manager’s ability to bring success.
* Despite operating with a much lower transfer budget than other top European clubs and having to play at Wembley while their new one billion pound ($1.36 billion) stadium was built, Spurs reached their first Champions League final after recovering from 3-0 down on aggregate away against Ajax Amsterdam in the semi-finals.
* However, Liverpool beat Tottenham 2-0 in the final in Madrid and a poor start to the 2019-20 campaign — with the club languishing in 14th place in the Premier League and having been thrashed 7-2 at home by Bayern Munich in the Champions League — led to the 47-year-old Pochettino being sacked in November.

* Ligue 1 champions sacked Thomas Tuchel a day after the league’s winter break began and signed Pochettino on a deal until June 2022, with an option of a further year.

How Paphos pulled together during a difficult 2020