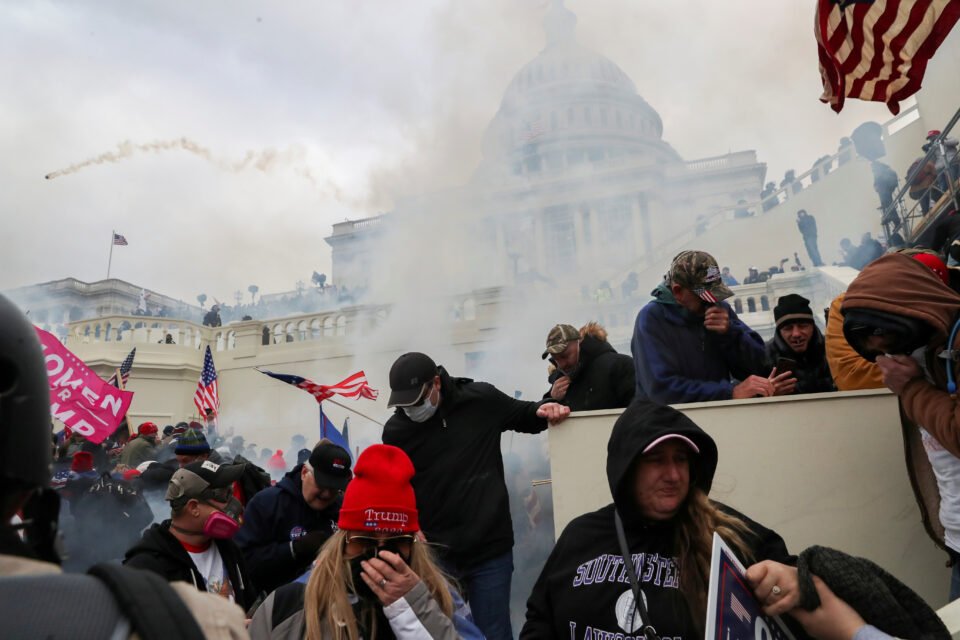 FILE PHOTO: Supporters of Trump during a clash with police officers in front of the US Capitol Building

The brother-in-law of a woman killed during Wednesday’s assault on the U.S. Capitol by a mob seeking to overturn President Donald Trump’s election loss said he blames Trump for the riot, and has joined calls for him to be removed from office.

Rosanne Boyland, a 34-year-old resident of Kennesaw, Georgia, was one of four civilians who died in the rioting, according to Washington, DC police. A Capitol Police officer also died from injuries in the melee.

Police didn’t disclose the cause of Boyland’s death.

However, Justin Winchell, a friend who accompanied Boyland to a Trump rally near the White House and marched with her to the Capitol, told Atlanta CBS affiliate WGCL that she was trampled to death in a massive crowd surge when protesters clashed with Capitol Police.

Boyland’s brother-in-law, Justin Cave, told Atlanta media that his wife, Boyland’s sister, had tried to persuade her not to attend the Trump rally in Washington.

Boyland was “passionate about her beliefs” and support of Trump and the family was grieving for others killed and injured in the rioting, he told https://twitter.com/aungeliquefox5/status/1347325983393800194 a local Fox television reporter.

“I’ve never tried to be a political person, but it’s my own personal belief that the president’s words incited a riot that killed four of his biggest fans last night and I believe that we should invoke the 25th Amendment at this time,” Cave said.

A White House spokesman did not respond to a request for comment about Boyland’s death.

Asked if Trump was to blame for his friend’s death, Winchell said: “Does he have blood on his hands? No!”

Trump urged his supporters to come to Washington for the rally Wednesday, the day the U.S. House of Representatives and Senate were scheduled to certify his election loss to Joe Biden, then told them to walk to the Capitol “to fight.”

Under the 25th Amendment, a president can be forcibly removed from power if the vice president and a majority of cabinet members agree that the president is unfit for office. Democratic leaders in Congress have called for immediate impeachment proceedings if Vice President Mike Pence and Trump’s Cabinet fail to seek to remove Trump from power.

Washington, DC, police on Thursday said that three other civilians were killed in the rioting on Wednesday.

Ashli Babbitt, 35, died of a gunshot wound in a shooting by Capitol Police being investigated by DC police. Babbitt, a U.S. Air Force veteran, had embraced far-fetched right-wing conspiracy theories, according to her social media activity.

A statement released by Greeson’s family to local media said that the avid motorcycle rider had suffered a heart attack.

“Kevin was an advocate of President Trump and attended the event on Jan. 6 to show his support. He was excited to be there to experience this event,” according to the statement quoted in The News Courier in Athens.

Phillips, a computer programmer, died of a stroke, the Philadelphia Inquirer reported.

Also killed was Capitol Police officer Brian Sicknick, 40, who suffered a stroke after injuries sustained “while physically engaging with protesters” the department said.