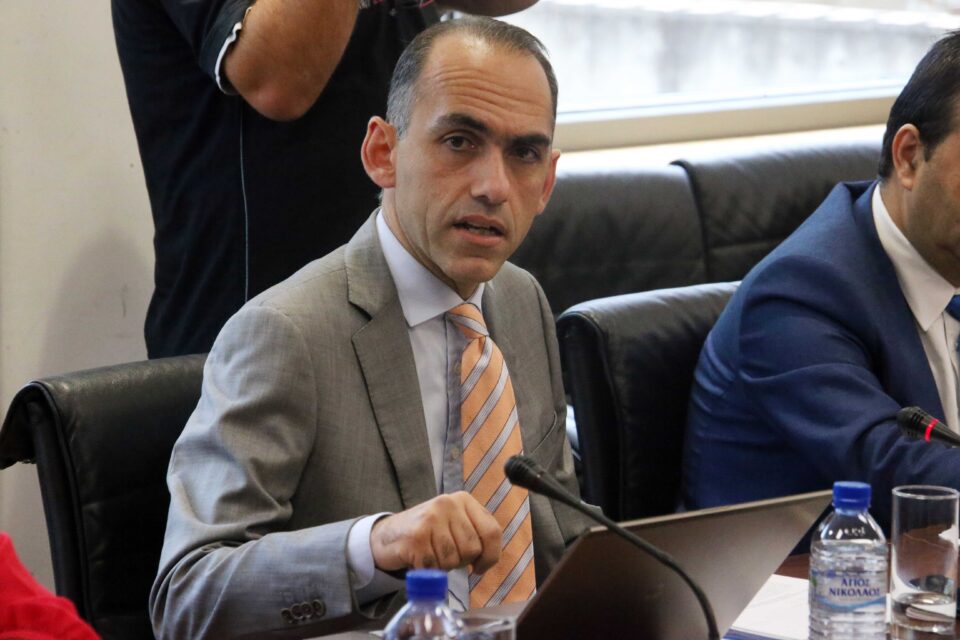 A two-state solution could never be Disy’s choice, the ruling party’s leader Averof Neophytou said on Monday in an apparent criticism of his deputy leader’s comments that the Greek Cypriot side should not insist on a federal solution just for the sake of it.

Disy’s deputy head, Harris Georgiades has stirred the waters within his party in a series of articles and interviews on his views for solving the Cyprus problem. His comments have led some to accuse the former finance minister of indirectly favouring a two-state solution.

Neophytou, in a bid to clarify Disy’s position, rushed on Monday to issue reassurances that his party’s long-standing position has been and remains a solution within the agreed framework of the bizonal, bicommunal federation (BBF) with political equality as defined in the relevant resolutions and without guarantors and occupying armies.

“The two states demanded by the Turkish side are the legalisation of the occupation and they can in no way ensure the survival of the Cypriot Hellenism in its land,” Neophytou said.

“Such thoughts are not and could never be the choice of the Democratic Rally, the party that has been fighting and continues to fight countless battles for the liberation and reunification of the country.”

The apparent division between the two men coincides with the arrival of US special envoy Jane Holl Lute for meetings with the two leaders to discuss the holding of an informal five-party summit to be convened by the UN secretary-general.

Neophytou’s statement follows Sunday’s Kathimerini interview with Georgiades, who said that the last chance for a solution was the Annan plan and subsequent referendum in 2004, when the two communities were asked whether they agreed to the reunification of the island.

“If at the time, a more effective negotiation had preceded and if Akel had the elementary political courage, the Cyprus problem would have been resolved. I would very much like to be wrong, but I don’t think so.”

The then Akel leader, Demetris Christofias, did not openly back the plan, and famously urged party members to vote for a “soft no” designed to “cement a yes”. The loss of Akel support scuppered any hope of a yes vote in the referendum.

Georgiades also said that though it was not the choice of the Greek Cypriot side, the partition “emerges from the de facto situation”.

The former finance minister said he would not agree to a federation without the return of Morphou and Famagusta and argued that the way Turkish Cypriot representatives view a federation leaves things the way they are now but with joint state sovereignty.

On the issue of Famagusta, Georgiades also said that foreign diplomats have been sending out feelers on whether it would have been so terrible for refugees to return under Turkish administration.

“They have started pitching that idea. That is why I say that we are not going to accept a federation for the sake of it, nor should the threat of the partition lead us to accept solutions that not only will not give Cypriot Hellenism even some benefits but will jeopardise its security and existence.”

Georgiades was first accused of indirectly supporting a two-state solution in an article of his published by Kathimerini on January 1, called ‘New Realism’.

Georgiades said during Monday’s interview that while the Greek Cypriot side discusses a solution based on the Guterres Framework, Turkey declares that Famagusta and Morphou are Turkish soil. He said things are very difficult, that partition has existed for almost half a century while the most worrying thing was that the non-solution will not be static, entailing risks.

Georgiades had said that the notion of the BBF solution, the way Disy founder and former President Glafcos Clerides had envisaged, was dead.

“Clerides had the political courage to recognise that, in order not to lose half of our homeland we must be prepared to share sovereignty in a federal solution model,” he said, adding that today the risk of Cyprus remaining partitioned remains, as is the non-return of Morphou and Famagusta, with only joint sovereignty. “And in a way that it will not even ensure the state’s functionality,” he said.

Georgiades also said that Clerides’ goal was the return of refugees to their properties, which at the time was feasible, but not anymore with the arrival of settlers, the Turkification of the north, and because most refugees have died while the properties are gone.

“Nor is there anyone that will give us tens of billions to be paid in compensation,” he said.

He added that Clerides fought the partition as much as anyone but was never an advocate of just any solution.

According to Georgiades, realism does not mean accepting a solution that will carry and magnify all the problems of the 1960s. “It means to seek a solution on 21st century terms,” he said.

On the two-state solution, Georgiades said the EU would not agree to the accession of northern Cyprus as a Turkish state, nor would the Republic of Cyprus. He also called on Turkish Cypriots to seriously consider what they want.

“Two states mean loss of the European perspective. It means an end to the European passports of the Republic of Cyprus that they hold today,” he said.

On what he proposes, Georgiades, said he was in favour of “a functional approach” by applying some important arrangements before the final agreement. “Trade, transfers, or the reduction of troops would be moves that would put the whole effort on a new footing. They would yield tangible examples of the positive outlook […] measures that would mark the beginning of the distribution of the peace dividend.”

He said the book by a member of the negotiating team, Polys Polyviou, ‘Kypriako: Mia alli proseggisi’ (The Cyprus Problem: Another Approach), suggested an interesting possibility. It argues for an evolutionary solution through a process of land exchange and upgrading of the Turkish Cypriot community.

He added that though this approach was not discussed at Disy, he did not feel it was against the party’s standing positions on the Cyprus problem. Clerides himself had attempted such an approach by proposing the return of Famagusta in connection with the operation of the Tympou airport, which was rejected by the Turkish side.

Neophytou said on Monday that “the solution must respect international law and European principles and values, for the benefit of all Cypriots.”

“The above components are absolutely necessary in order for the solution to be accepted by the Democratic Rally,” he said.

Jumping into the debate, Akel spokesman Stefanos Stefanou said on Monday that the timing of Georgiades’ statements was significant. He said that at a time when there are more and more revelations that President Nicos Anastasiades was discussing a two-state solution behind closed doors, Disy’s deputy leader has expressed views on a “new realism” in the Cyprus issue, which does not consciously not rule out partitionist solutions.