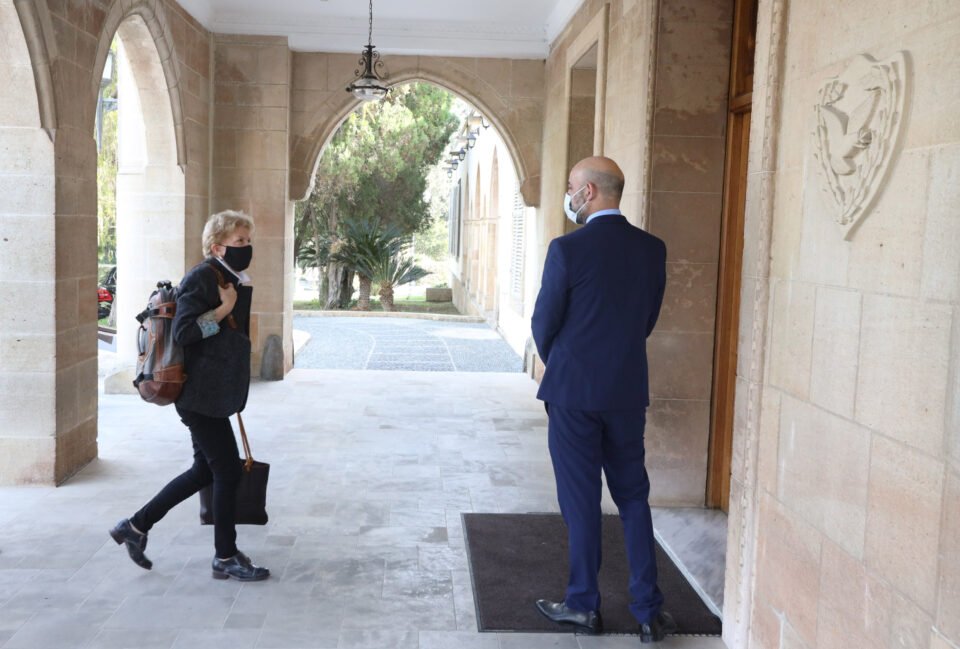 President Nicos Anastasiades conveyed to Lute during their meeting that unilateral actions do not contribute to the success of a new dialogue on the Cyprus problem.

Anastasiades received Lute, who is in Cyprus for a second round of separate meetings with the two leaders, at the Presidential Palace. The meeting lasted around two hours.

After the meeting government spokesman Kyriacos Kousios said Anastasiades and Lute “had a constructive discussion regarding the informal five-party summit to be convened by the UN secretary-general (UNSG)”.

Anastasiades expressed his readiness to participate in the informal five-party summit within the framework of the UNSG’s letter of October 26, 2020, Kousios said. “He also expressed the expectation that the informal five-party meeting will lead to a substantial resumption of talks, with the aim of reaching a solution to the Cyprus problem within the agreed solution framework.”

In the north, Lute later met with Turkish Cypriot leader Ersin Tatar who reiterated his view that times have changed and that a two-state solution is the answer, adding: “Cyprus is no longer the old Cyprus.”

Their meeting lasted about an hour and a half, with Tatar saying afterwards that the informal summit in New York may be possible, with a rough timeframe of late February to early March.

During his meeting, Anastasiades expressed the importance of promoting effective confidence-building measures, as per the request of the UNSG, Kousios said, “which will create the appropriate climate and prospects for achieving the goal of resolving the Cyprus issue”.

“At the same time, he noted that unilateral actions do not help create the right climate, nor do they help to the success of a new dialogue,” he said.

Anastasiades will convene the National Council on Thursday morning to brief political leaders of his meeting with Lute.

Lute had separate meetings with the two leaders also at the beginning of December.

Government sources told the Cyprus News Agency earlier in the day that Lute was exploring whether she could start building the result that possibly could come out from an informal 5+1 meeting.

Anastasiades has recently sent a letter to the UNSG proposing a number of proposals to contribute to a constructive climate and strengthen the prospects of a solution to the Cyprus problem.

Guterres in his Good Offices Mission report to the Security Council said regarding the consultations conducted by Lute with all involved, that both the sides and the guarantor powers have expressed a willingness to attend an informal five-plus-one meeting under his auspices.

“The purpose of this meeting will be to determine whether common ground exists for the parties to negotiate a sustainable, lasting solution to the Cyprus problem within a foreseeable horizon,” he said. “This time must be different.”