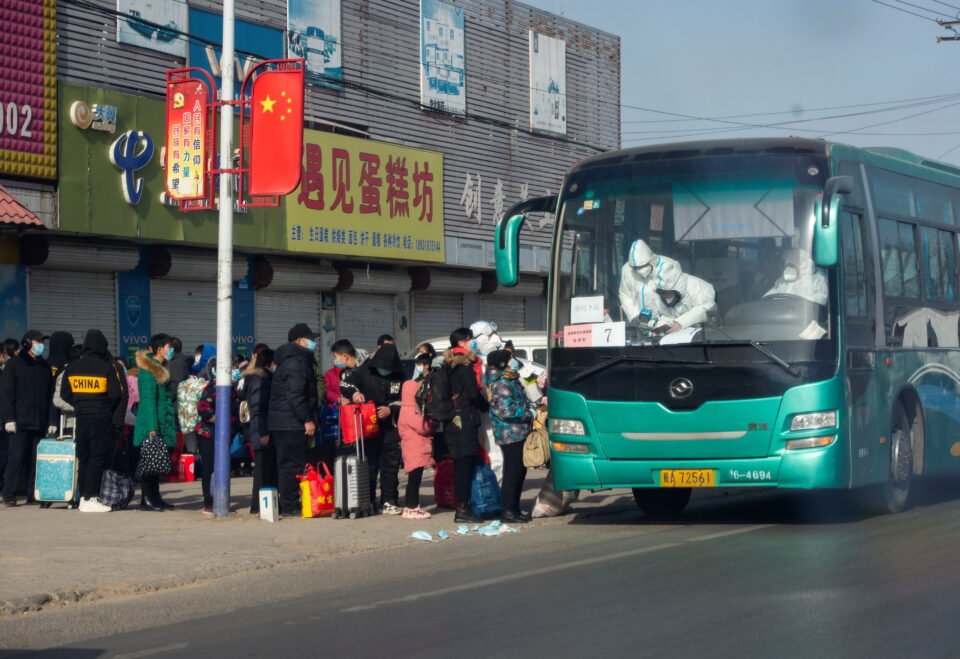 People who are required to undergo centralized quarantine line up to board a bus at a village in Gaocheng district, following a recent outbreak of the coronavirus disease (COVID-19) in Shijiazhuang, Hebei province, China January 11, 2021. cnsphoto via REUTERS ATTENTION EDITORS - THIS IMAGE WAS PROVIDED BY A THIRD PARTY. CHINA OUT.

Authorities in China introduced new COVID-19 curbs in areas surrounding Beijing on Tuesday, putting 4.9 million residents under lockdown as new infections raised worries about a second wave in a nation that has mostly contained the disease.

The number of new cases in mainland China reported on Tuesday almost halved from a day earlier and remain a small fraction of what it saw at the height of the outbreak in early 2020. However, local authorities are implementing strict curbs whenever new cases emerge to prevent the kind of economic paralysis seen a year ago.

The National Health Commission reported 55 new COVID-19 cases on Tuesday, down from 103 a day earlier. Hebei province, which surrounds Beijing, accounted for 40 of the 42 locally transmitted infections, with the capital and northeastern Heilongjiang province reporting one local case each.

The city of Langfang in Hebei on Tuesday said its 4.9 million residents will be put under home quarantine for seven days and be subject to mass COVID-10 testing in the latest attempt to curb the spread of the coronavirus.

Two counties under Langfang’s jurisdiction that border Beijing, Guan and Sanhe, had already announced home quarantine measures. Guan reported one new COVID-19 case but Sanhe did not say whether any of its residents were diagnosed with the disease.

Shijiazhuang, Hebei’s capital, has been hardest hit in the latest surge in infections and has already placed its 11 million people under lockdown. The province has shut off certain sections of highways and is ordering vehicles registered to Shijiazhuang to turn back.

Authorities in Beijing’s Xicheng district said on Tuesday that the confirmed COVID-19 patient from Guan county works at a building in the district.

A new guideline issued by the Beijing Center for Disease Prevention and Control recommended that taxi and ride-hailing operators suspend car-pooling services, the Communist Party-backed Beijing Daily reported on Tuesday.

The guideline also said that drivers should get a nucleic acid test for coronavirus every week and be vaccinated in order to work.

Underscoring the risk of the spread, the city of Changchun – the capital of northeastern Jilin province – reported seven new asymptomatic patients on Jan. 11, four of whom had travelled from Wangkui recently.

Residential compounds that these patients lived in were put into lockdown, preventing people and vehicles from leaving the premises.

Across China, the number of new asymptomatic cases rose to 81 from 76 a day earlier.

The total number of confirmed COVID-19 cases reported in mainland China now stands at 87,591, while the death toll remained unchanged at 4,634.