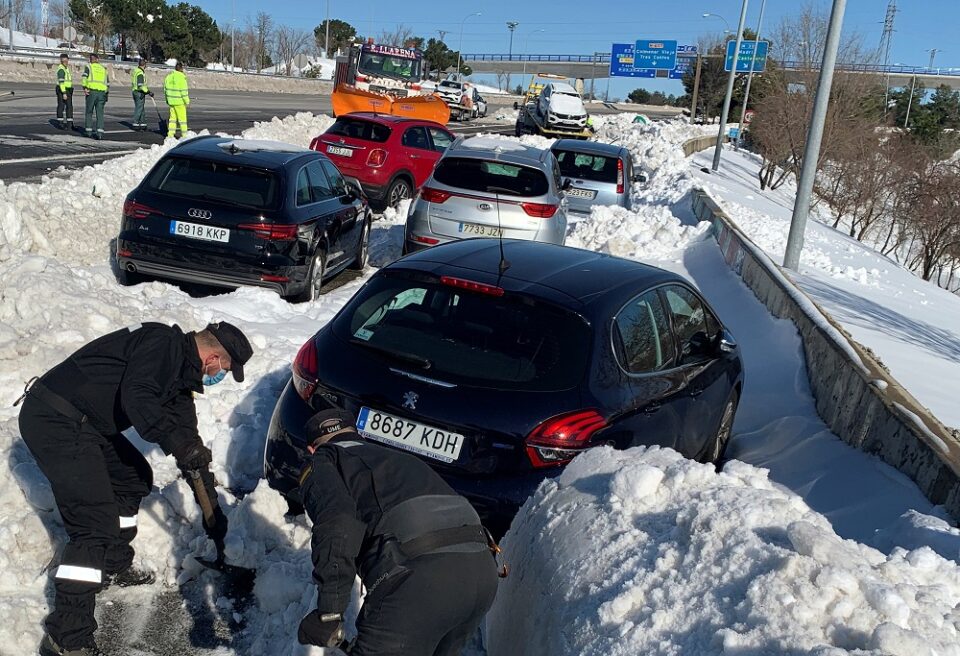 Members of Spain's military unit (UME) shovel snow to open a pass next to cars accumulated on M-40 highway after heavy snowfall in Madrid. REUTERS/Marco Trujillo

By Elena Rodriguez and Belén Carreño

Authorities struggled to clear ice and fallen trees from the streets of Madrid on Tuesday and temperatures in parts of Spain hit record lows after a snowstorm wrought havoc across the country at the weekend.

Early jubilation at the historic snowfall, which saw skiers gliding through the streets and mass snowball fights, gave way to frustration as most public transport remained stalled and pedestrians avoided the icy streets.

“You in Madrid are not ready for this,” said Demetrio, a Ukrainian living in Madrid, who did not give his last name. “If there is snow, it should be cleaned up the next day.”

More than 800 soldiers have been deployed to help clear the city, where many roads are still blocked after Storm Filomena felled some 150,000 trees, cut supply lines and left supermarket shelves bare.

Only the occasional police car or taxi braved the city centre, while just 28 of Madrid’s more than 200 bus lines were operational.

With waste collection on hold, rubbish bags piled up alongside snowdrifts.

“At my home pipes are frozen so we don’t have water … it’s crazy,” said 29-year-old media worker Amaia Huerta.

By Monday evening, intercity train services had resumed and Barajas airport had almost returned to capacity.

Fresh produce was still in short supply at three large, central supermarkets on Tuesday afternoon, although the regional government said the situation had begun to normalize after 1,200 delivery trucks reached the city’s main wholesale market.

Agricultural association UPA said farmers in the region would lose millions of euros from damage to crops and buildings, and called for extra state aid for the sector.

As the snow turned to ice amid temperatures as low as -10 degrees Celsius overnight, Madrid’s health department reported 2,000 injuries from falls in the past 24 hours and urged people to stay at home.

Outside Madrid, temperatures fell even further during the night, with Spain’s lowest, -25.4C, registered in the province of Teruel to the east, a local record.

Two homeless men who died in Barcelona on Monday night were confirmed as the latest victims of cold weather, which has so far killed five, Interior Minister Fernando Grande-Marlaska told a news conference.

Jet2 suspends flights until March at the earliest