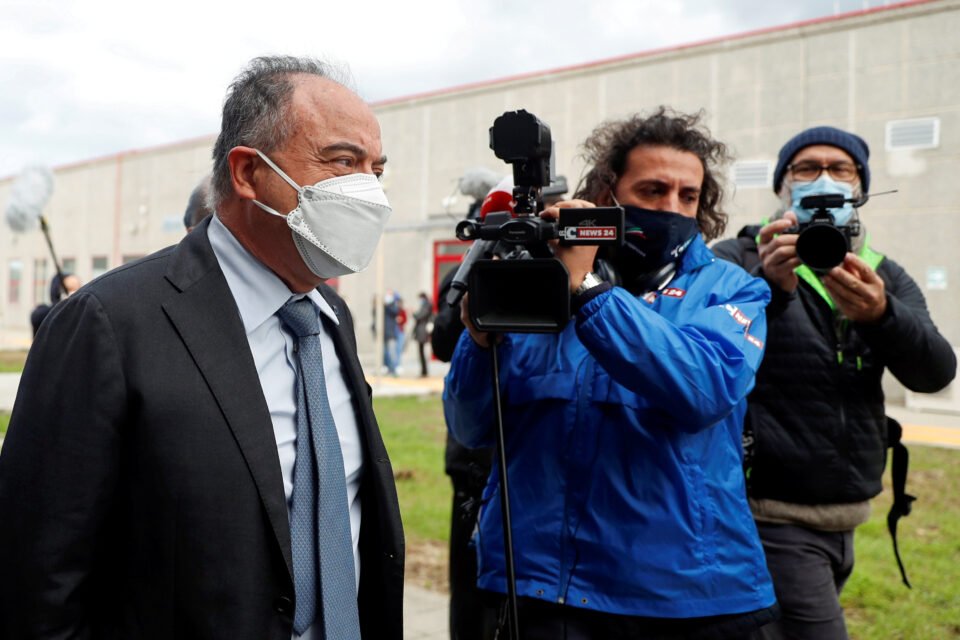 Prosecutor Nicola Gratteri arrives at the tribunal for the trial of 355 suspected members of the 'Ndrangheta mafia accused of an array of charges, in Lamezia Terme, Italy, January 13, 2021. REUTERS/Yara Nardi

Prosecutor Nicola Gratteri has spent the past three decades battling Italy’s most powerful mob group, the ‘Ndrangheta, renouncing any semblance of a normal life as he seeks to break its grip on his native Calabria.

The toe of Italy’s boot, Calabria is a rugged backwater from where the ‘Ndrangheta operates its multi-billion dollar crime syndicate, controlling chunks of Europe’s cocaine trade and laundering vast sums through a network of front businesses.

On Wednesday, Gratteri launched one of the most ambitious legal assaults yet on the group, with the start of the largest mob trial in Italy in 30 years, putting 355 suspected gangsters and their associates in the dock on an array of charges.

“The trial is being seen as a kind of liberation for Calabria, a turning point that should allow people here to regain a freedom that has been denied them for many years,” Gratteri told Reuters in a telephone interview.

The case has evoked memories of the so-called maxiprocesso that severely weakened the more storied Cosa Nostra mafia group on the island of Sicily, off the tip of Calabria, in the 1980s.

Infamously, the mafia murdered in 1992 two of the leading prosecutors in that case, Giovanni Falcone and Paolo Borsellino, as a reprisal for putting hundreds of mobsters behind bars.

Gratteri, 62, has had an armed escort ever since he first started probing ‘Ndrangheta in 1989, but is taking even more care now as the stakes get ever higher.

“I am being more careful than usual at present. I don’t go 10 metres (yards) without my armoured car,” he said.

“I haven’t been to a restaurant for more than 20 years and haven’t gone to the cinema for more than 30 years. I am always closed away. I eat in the office. My house is essentially a bunker. I have a good team of bodyguards.”

No amount of protection could save him from the sort of bomb blasts that killed Falcone and Borsellino, but Gratteri said he does not let the thought unsettle him.

“I am trained to deal with fear. You look death in the face, you rationalize death, otherwise you cannot carry on doing this job for so many years.”

The ‘Ndrangheta prospered hugely as Cosa Nostra faltered in the wake of the maxiprocesso take down, and prosecutors say it is now the most powerful mafia group in Italy, ruthlessly crushing anyone standing in its way.

Police said last week that they believe a woman farmer, who vanished in 2016, was killed and fed to pigs after she had refused to sell her land to one ‘Ndrangheta boss.

The Calabrian trial is expected to lay bare how the crime gang recruited an army of white collar workers — lawyers, accountants, public officials and court clerks — to enable their operations.

“Mafias change and evolve along with the rest of society. They get to look increasingly like the rest of us,” said Gratteri, adding that the ‘Ndrangheta had put down roots across the wealthy north of Italy and in much of Europe, as well as Canada, the United States and as far away as Australia.

Underscoring their reach, a court ruled last month that two out of the last five governors in the region of Valle d’Aosta in northwest Italy two had been elected with ‘Ndrangheta support, while a third governor had his request for help turned down.

Gratteri acknowledges that Wednesday’s trial, which is expected to last a year, will not kill off the crime empire, but he hopes it will mark an important step towards its demise by encouraging victims to come forward and denounce the mobsters.

“It will open the path to yet more trials and allow us to make even deeper inroads into the group. I want people to believe in us and begin to collaborate and have ever great trust in us,” he said.

The beaver who built dams in his rescuer’s home