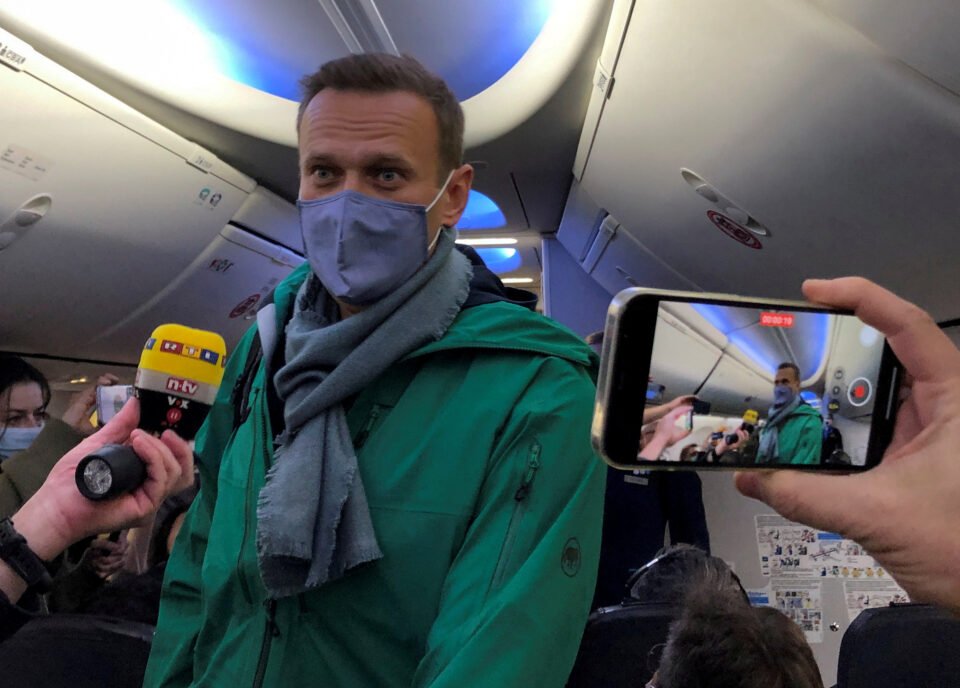 Before he returned to Russia, opposition politician Alexei Navalny and his supporters had anticipated he would be arrested and planned to force the Kremlin to release him by staging repeated protests, a close ally has said.

Navalny, President Vladimir Putin’s most prominent critic, was detained on Sunday after flying home for the first time since being poisoned with what the West says was a military-grade nerve agent that Navalny says was applied to his underpants by state security agents.

The 44-year-old lawyer, now in a notorious Moscow prison pending the outcome of four legal matters he says are all trumped up, accuses Putin of ordering his attempted murder. Putin has dismissed that, alleging Navalny is part of a U.S.-backed dirty tricks campaign to discredit him.

Navalny‘s allies plan nationwide protests on Saturday to try to force the Kremlin to order his release, a high-stakes test of his support in the depths of winter during a pandemic.

Leonid Volkov, a close Navalny ally, told Reuters that the opposition plan also involves releasing video investigations into Putin and his allies, such as one on Tuesday about an opulent palace they alleged belonged to Putin, which the Kremlin denied. It has been watched 53 million times online.

Two sources close to the Kremlin however believe Navalny is becoming a threat and that he will probably be kept in jail even if there are prolonged protests in his support.

The Kremlin did not immediately reply to a request for comment.

Volkov and others are banking on outrage over Navalny‘s treatment and the palace video. They are also trying to exploit what opinion polls show is public frustration over falling wages and pandemic-fuelled economic pain.

But the government has introduced tougher penalties for protests, while 68-year-old Putin looks unassailable with an approval rating of more than 60%.

In 2013, a court jailed Navalny for five years, but then released him on parole after mass protests near the Kremlin.

“We managed it then, we should be able to manage it now. Most important is not to be afraid,” Volkov told supporters on YouTube on Thursday.

Lev Gudkov, head of the Levada pollster, which is not affiliated with the authorities, says Navalny has an approval rating of 15-17%, higher than he is credited with by government-backed pollsters, but is in no position to overthrow the government.

“But he is in a position to discredit the current authorities,” said Gudkov.

Both the sources close to the Kremlin, who spoke anonymously due to the matter’s sensitivity, said authorities were unlikely to cave in and release Navalny, and one expected him to remain in prison until after parliamentary elections in September.

“He’s already started to be a threat,” said the first source. “But he’ll be sitting in jail during the elections to the Duma (parliament).”

“Those kind of things (letting someone go after protests) don’t happen. Do it once and everything will be decided on the street after that,” the second source said.

The Kremlin has laughed off the idea that Navalny poses a threat to Putin.

It also denies controlling the judiciary or law enforcement, which has said Saturday’s protest is illegal, detained several of Navalny‘s allies and warned social networks to stop helping circulate posts promoting the event.

The two sources however thought the heavy-handed way the state had handled Navalny‘s homecoming was boosting his support and turning him into a political martyr.

Navalny was right to return despite the risks, the first source said.

“He’s a real man. With balls. There aren’t other people like that around at the moment. He follows his intuition, which has been right.”

Though the danger Navalny posed to the Kremlin was growing, both sources thought it would be some time before he represented a serious threat to Putin. A long jail term would be a mistake, said the first source.

“They (some Kremlin officials and the security services) are such idiots. I think they’ll lock him up and turn him into a hero … Our comrades only think in terms of the present and never about tomorrow,” the source said.

Iran, Russia upbeat about progress of nuclear talks in Vienna

BBC journalist says he has left Russia for British exile