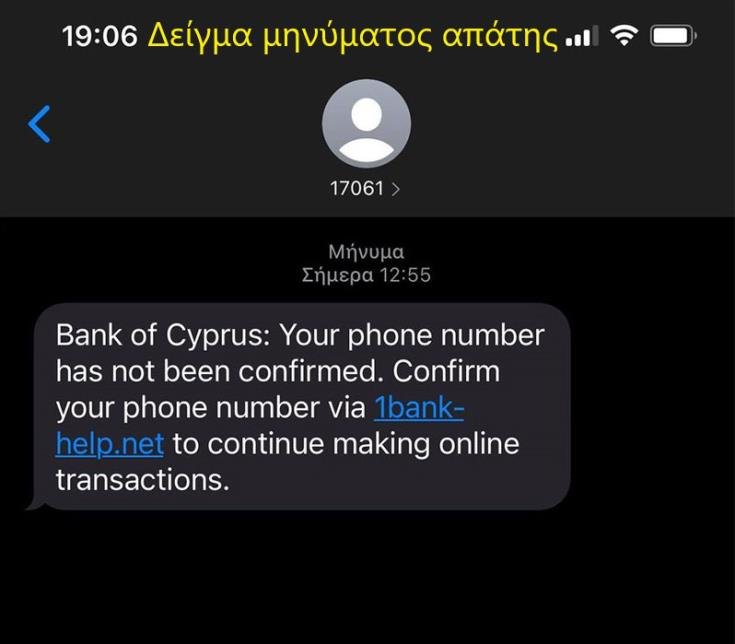 Screen grab of the fake message bank customers have received

Police urged the public on Saturday to be alert and not reply to text messages allegedly coming from banks calling on them to verify their access details to e-banking portals after scammers stole more than €70,000 recently from bank accounts.

Police said that it has received several complaints by people who received such messages.

It emerged on Friday that around €78,000 was stolen that way from the accounts of three people.

Head of Limassol police CID, Lefteris Kyriacou, told Alpha TV that they received three complaints by people who were duped and money was stolen from their bank accounts. They had all followed the instructions given to them through the text messages the scammers sent on their mobile phones.

A man and woman, both 60, reported that scammers stole 8,000 in total from their bank accounts while a 61-year-old man reported that €70,000 was stolen from his, Kyriacou said.

Police said that people receive misleading information and messages asking them to confirm the access details and various account information they hold in banks or credit institutions.

The confirmation of the data is done through an electronic link that directs people to fake websites that look like the websites of the bank. “As a result, scammers gain access to people’s bank accounts via the internet (e-banking – i-banking) and extract large sums of money from their accounts, transferring money by bank transfer to foreign banks,” police ssid.

The police announcement follows that from the Bank of Cyprus earlier in the week warning its clients to be on alert against scammers trying to access their accounts, urging them not share any information.

The bank had said that in the past few days, clients have been recipients of misleading text messages, emails and messages through popular Apps by scammers trying to defraud them.

Clients were being asked to share sensitive information such as their user name and password on ibank, one time passwords (OTPs) and credit card numbers in an attempt to access their accounts and make transfers or use their cards.

It also assured that bank personnel would never ask clients for personal information such user names and passwords of their ibank account, OTPs or verification codes, credit card numbers and details by email, SMS, telephone calls, pop ups or links.

The bridges keeping animals safe in a human-impacted world