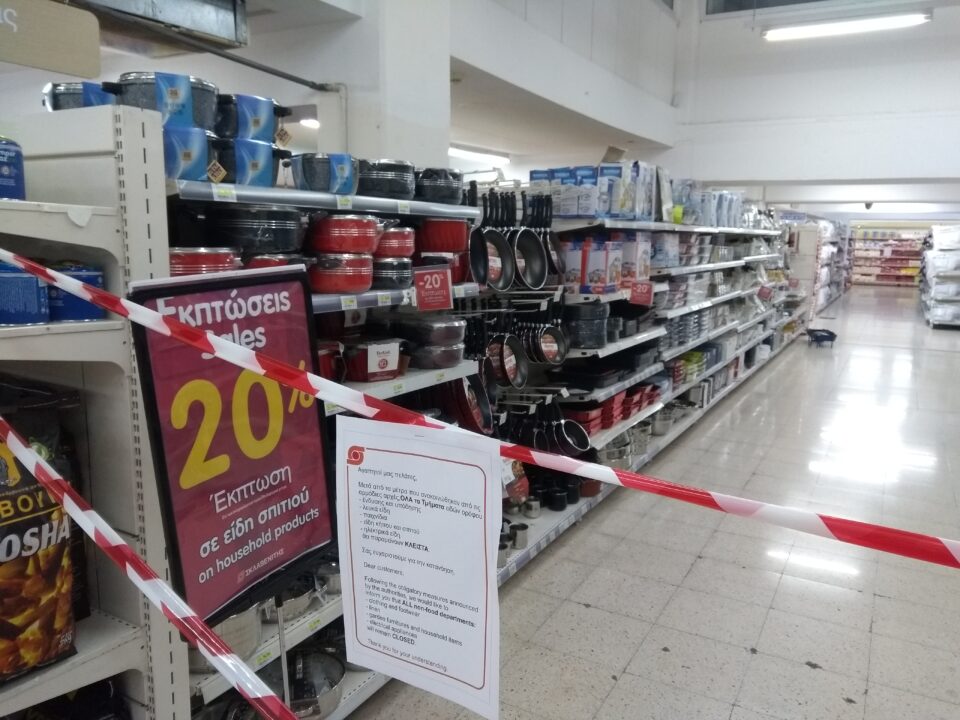 Non-essential items like kitchen goods are off limits at supermarkets

But most are adhering to the rules

Over this past week, police fined a number of supermarkets for flouting the lockdown’s restrictive measures by selling non-essential items such as electrical goods and cosmetics.

The government’s second hard lockdown earlier this month included specific guidelines to tackle unfair competition by supermarkets which are allowed to remain open.

They can operate but only sell food and other essential items. Items such as footwear, clothing, cosmetics, electric appliances, stationary and sporting goods are off limits because it gives supermarkets an unfair advantage over specialist shops that have been forced to close.

Police spokesman Christos Andreou told the Sunday Mail that on Wednesday alone two establishments had been fined. The first was in Limassol with a fine of 750 euros, while the second was in Nicosia with a whopping 8,000 euros.

“We also reported a number of incidents over the previous weekend at various penalty levels,” Andreou said, explaining that the size of the fine is relative to the size of the supermarket.

Andreou was referring to two incidents involving two supermarkets in Limassol, both of whom were fined 8000 euros each after the police had conducted a search on the premises.

The general director of the Cyprus Supermarket Association, Andreas Hadjiadamou, told the Sunday Mail that neither himself nor the association are aware of the supermarkets in violation.

“I have spoken to our members and I do not think this was done by any of our members,” said Hadjiadamou, adding that he was still currently investigating the issue.

“Our members have been following every guideline issued by the government, not just the ones related to the sale of currently restricted items.”

For small shopkeepers’ union Povek, the news that some supermarkets have been caught selling non-essential items highlights how unfair the lockdown system is.

“We said from the beginning that supermarkets should not be able to sell these items while other retail stores are forced to be closed, because it violates competition principles,” said Povek’s general secretary Stefanos Koursaris, providing examples of items which supermarkets carry that are also sold by smaller, specialist businesses, including shoe and clothes shops.

But he added that the police were trying hard to monitor what supermarkets sell.

“We understand that it is difficult to monitor this fully and the police cannot be doing this all the time, but we are satisfied with the monitoring levels implemented.”

A visit to a handful of supermarkets found no loopholes in terms of any non-essential items, with large sections of the supermarket being cordoned off with tape and warning signs explaining the situation to customers.

However, after speaking with a retail business owner who wishes to remain anonymous, the issue of kiosks was highlighted as a major source of flouting the rules.

“The vast majority, if not all of the major supermarket chains, are adhering to the competition rules issued by the government, but the kiosks are another story,” the business owner said.

Indeed, after visiting several kiosks, all of them part of a kiosk franchise, I was able to buy a number of items which are found in the restricted section of supermarkets.