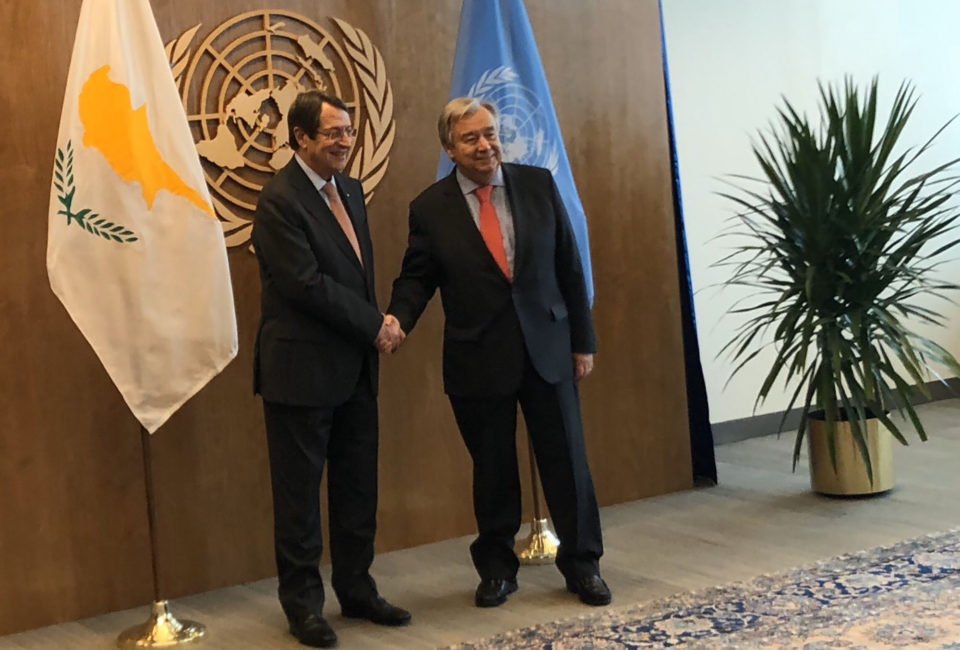 President Nicos Anastasiades on Friday said there was no question of him consenting to a change to the terms of the mandate regarding the solution of the Cyprus problem after UN Secretary-General Antonio Guterres said if both sides had a common view there could be changes to this mandate.

The mandate laid down from decades of negotiations foresees a bizonal, bicommunal federation (BBF) but after the last failed talks in 2017, the Turkish side has been pushing for discussion on a two-state solution.

Asked to comment on Guterres’ statements that he would be open to listening to all ideas during an informal conference on Cyprus, Anastasiades said that this “depends on the positions of each side.”

He added that in order for the Secretary-General to appeal to the Security Council to change the terms of the mandate regarding the desired solution to the Cyprus problem, both sides must consent.

“Our position is clear and therefore there is no question of such a consensus being raised in any way,” Anastasiades said.

Guterres told members of the press on Thursday that he would be ready to go to the Security Council if there was an agreement of the parties enlarging the scope of the negotiations, to be interpreted as a common agreement.

He said his mandate from the UN Security Council refers explicitly to a bizonal, bicommunal solution in Cyprus, but this was not an impediment to the parties presenting the positions they will present.

“It is my intention to convene early March a meeting of the 5+1. That meeting we decided to be an informal meeting without precondition… There are these changes in the administration of northern Cyprus. It is important that there is a chance for all the people to frankly discuss among themselves how they see the future and to see how to move forward,” he said.

Guterres was replying to a question from a Turkish journalist, about the 5+1 meeting, which is due to take place in March with New York being the preferred spot.

The UN chief was asked whether he would insist on a bizonal, bicommunal federation going forward in line with previous Cyprus negotiations, or if he was open to new ideas, like that of Turkish Cypriot leader Ersin Tatar who has been promoting a two-state solution.

Guterres said that he has a mandate from the Security Council for UN involvement in relation to the negotiations. This mandate, he noted, refers explicitly to a bizonal, bicommunal solution.

“Obviously this is not an impediment for the parties to present the positions they will present. I am always ready to go to the SC and if there is an agreement of the parties enlarging the scope of the negotiations, to be interpreted as a common agreement in this regard,” he added.

He pointed out that the first step is to bring the parties together; to listen to them, to see the result of that discussion.

“And the fact that Ι stick to the mandate I received doesn’t mean that I am not open to listen to everybody, to take the conclusions of that discussion based on whatever the parties come to a common view about the future,” he concluded.