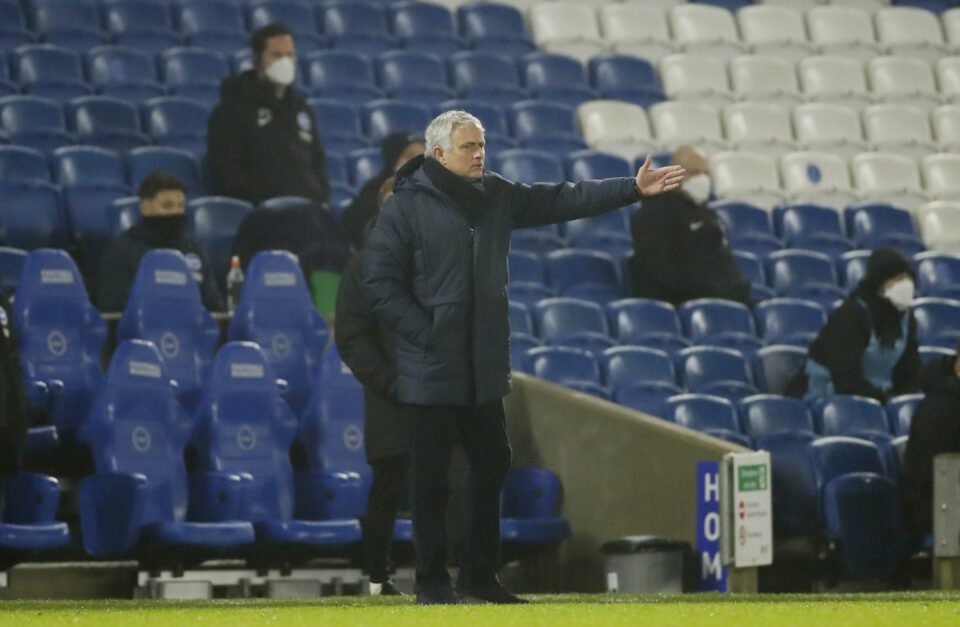 Defeat for Spurs, who were without injured star striker Harry Kane, dealt a further blow to their hopes of Champions League qualification.

Despite creating little, the Portuguese felt his team improved in the second period at the Amex Stadium and is eager for his players to remain positive as they bid to halt an alarming slump.

“The guys are men and men have feelings, in spite of being top professionals,” said the Spurs boss.

“I think football is a sport full of examples of teams and players individually that sometimes they are in an incredible moment of confidence and in other periods they are suffering with self-esteem. A bad result, a bad performance you see that in individuals.

“You see the striker that is five, 10, 15 games without scoring and he looks like he is not a top player and he is.

“You see the centre-back making incredible mistakes and you think he is an awful player and he’s not, and you see good teams that look bad teams and vice-versa. It’s just that it’s human feelings.

“As a coach I always fight against that. I always say that in my personal case, a victory doesn’t put me in paradise and a defeat doesn’t put me in hell and I try to pass that to all of the players but the reality is the beginning of the game was very important to start well and we didn’t.

“When these feelings were there and we concede a goal immediately and before that they hit the post, I think the team is struggling.

Brighton midfielder Pascal Gross had already struck a post before Trossard swept the hosts ahead with his first goal in 20 games.

Spurs substitute Carlos Vinicius went closest to snatching an equaliser but the visitors were poor and would have lost by more had Aaron Connolly not spurned a golden late chance.

With star man Kane nursing an ankle problem suffered during Thursday’s 3-1 loss to champions Liverpool, Mourinho opted to hand Gareth Bale only his second top-flight start of the season.

The Real Madrid loanee was ineffectual before being replaced in the 61st minute but his manager refused to blame individuals following another damaging defeat.

“If that question comes in a great moment for the team, and after a victory, and when Gareth like the team plays a good game, it’s easier for me to answer to you. I don’t want to do that. We lost, and we all lost.”

Victory for Graham Potter’s hosts was their first in 15 top-flight fixtures on home soil, stretching back to June 20 and moves them seven points clear of the drop zone.

Seagulls head coach Potter was pleased to end a prolonged period of suffering at the Amex Stadium with a precious win in the scrap for survival.

“We are delighted with the three points. The manner of the performance was top, we scored a good goal, kept a clean sheet, pretty much did everything we needed to do,” he said.

“This league you have to suffer, it’s a cruel league. Our performances have been good, we haven’t had the points and we live in a very simple world where, if you lose, you’re bad and, if you win, you’re good.”