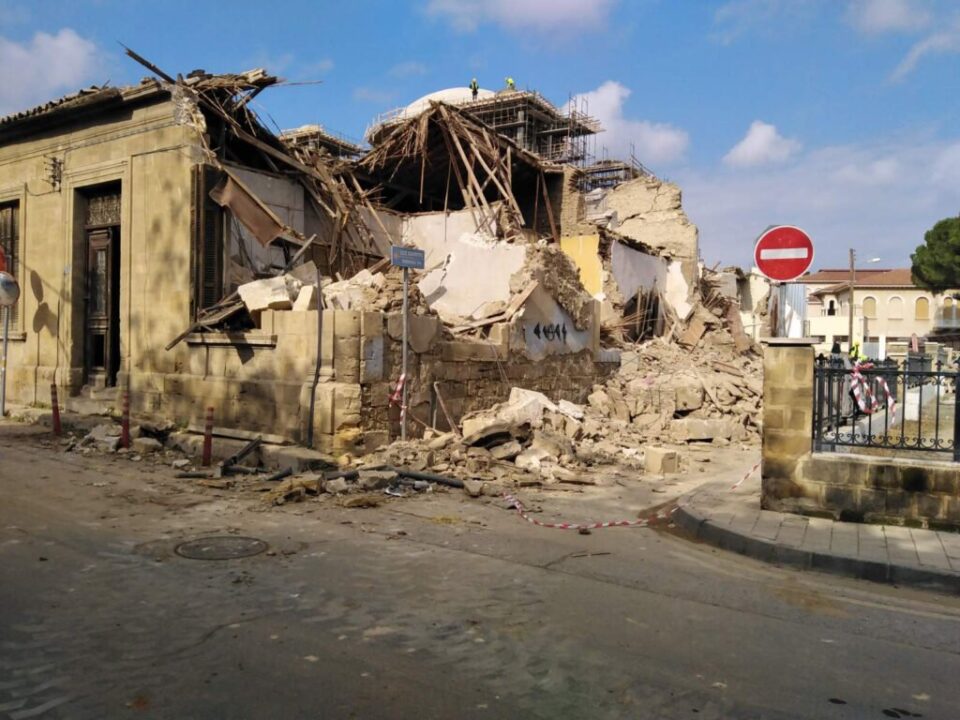 The Archbishopric intends to rebuild the four listed buildings which were partially demolished, Nicosia mayor Constantinos Yiorkadjis said on Tuesday after having spoken with Archbishop Chrysostomos.

The attorney general on Tuesday also stepped into the fray after the demolition of the houses by the archbishopric, while the interior ministry and Nicosia municipality demanded they be rebuilt.

Speaking on state radio, Yiorkadjis said the church’s intention is to restore the buildings to their previous state but he is still waiting to hear who ordered the demolition.

In letters to Interior Minister Nicos Nouris and Yiorkadjis, attorney general George Savvides condemned Monday’s surprise demolition in old Nicosia and asked to be informed on any actions taken on the matter.

Earlier on Tuesday, both the mayor and the interior ministry called the demolition illegal and demanded the buildings be restored.

The houses on Isokratous Street were located on land owned by the archbishopric, near where the construction of a cathedral is currently underway.

According to reports, the archbishopric has indicated that the demolition went ahead because Saturday’s bad weather damaged one of the houses, deeming them a safety hazard.

The mayor called the demolition an illegal, hasty and unfortunate action, adding that less drastic actions could have been taken if they were indeed damaged by the rain, such as blocking the road.

Over 7,000 buildings in Cyprus have been listed to preserve their cultural value and protect them for future generations, with significant financial incentives offered to owners for their restoration, the interior ministry said.

“If a structure of such historical and architectural significance is deemed dangerous, owners are obliged to obtain a licence for its immediate repair in order to ensure its stability and keep it from collapsing, and to ensure the safety of residents and visitors” it said.

According to the municipality, their demolition was conducted without the appropriate licence required for any construction work related to listed structures.

In addition, the original planning permissions issued to the archbishopric called for the restoration of the buildings, therefore knocking them down was out of the question, a municipality spokesperson told the Cyprus Mail on Monday.

The municipality has launched an investigation on the archbishopric’s motives, Yiorkadjis said, and will demand the houses are rebuilt in accordance with the relevant legislation.

The demolition has enraged political parties and the public as well as the technical chamber, Etek.

“The Church has ordered the bulldozing of Cypriot culture,” said a member of the public on Facebook, while another called the event “an outright, blatant crime”.

Disy on Tuesday wrote to the mayor demanding he call an emergency Municipal Council meeting to deliberate on the municipality’s next actions.

At a symbolic protest earlier in the day, Akel members held up signs reading “Shame”. Referring to statements and actions from other parties, spokesman George Loukaides said “nobody is convinced by this sudden display of sensibilities. We all know the ruling party has profited on all levels from the situation that has somehow made the archbishop a co-president of sorts”.

Echoing calls from other political bodies, the ministry said the municipality is obligated to call for the reconstruction of the demolished buildings, as indicated by the relevant legislation.

“This will be a step towards the preservation not just of Nicosia’s cultural character, but of the entire country’s”.

‘February to be critical month’ for Cyprus problem