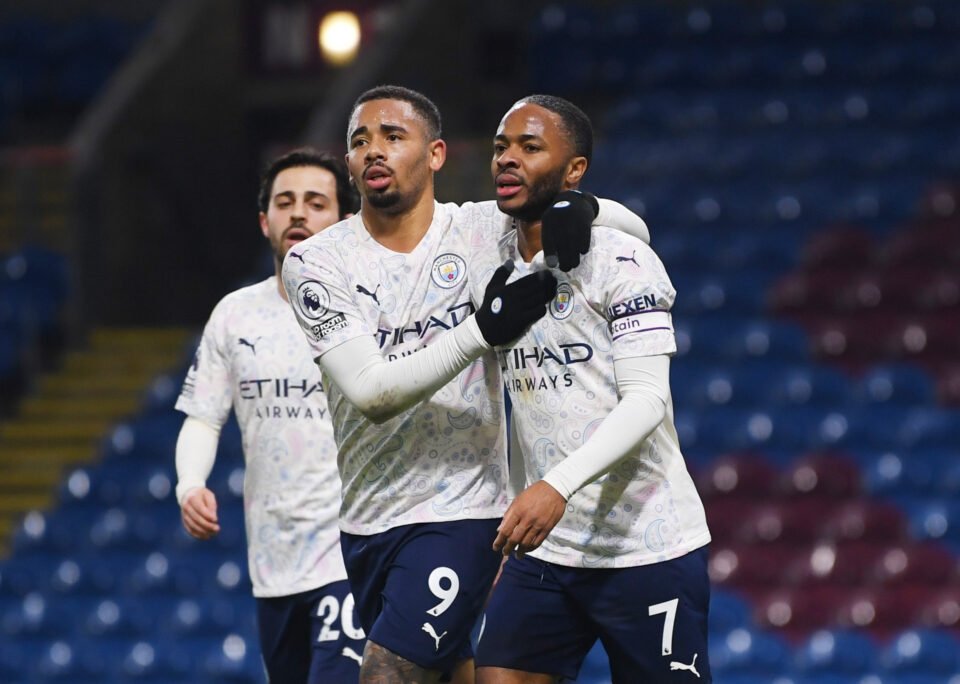 Raheem Sterling’s 10th goal of the season helped move Manchester City three points clear at the top of the Premier League table once again after a 2-0 victory at Burnley.

The England international added to Gabriel Jesus’ early strike to seal a comfortable win at Turf Moor as Pep Guardiola’s men secured a 13th successive victory in all competitions.

City were ahead within three minutes when Jesus headed home after Nick Pope could only parry Bernardo Silva’s shot but, to their credit, the Clarets managed to stem the early tide and work their way into the game.

However, they were pierced once again seven minutes before the break when Sterling stabbed home from Ilkay Gundogan’s driven cross to take his tally for the season into double figures.

Steven Alzate’s league goal handed Brighton a priceless 1-0 victory as champions Liverpool lost at Anfield for the second time in a fortnight.

Alzate’s 56th-minute contribution ultimately sealed victory in a game where his side created the better chances despite the hosts dominating possession as Jurgen Klopp’s men fired blanks once again 13 days after surrendering their 68-game unbeaten home run to Burnley.

The Reds are now seven points adrift of the leaders, who have a game in hand, while at the other end the Seagulls have eased themselves 10 points clear of the relegation zone.

Leicester bounced back from their weekend defeat by Leeds with a 2-0 win at Fulham to leave the hosts entrenched in the bottom three.

Kelechi Iheanacho headed the visitors into a 17th-minute lead after getting between defenders Tosin Adarabioyo and Joachim Andersen to meet James Maddison’s inviting cross.

The Nigeria striker played a pivotal role as the Foxes extended their lead on the stroke of half-time, turning smartly to feed Maddison, who then set up full-back James Justin to get past keeper Alphonse Areola to round off a lightning counter-attack, killing off any realistic prospect of a fightback.

The on-loan Manchester United forward, playing his first league game since July in front of England boss Gareth Southgate, helped himself to a second-half double after Tomas Soucek had opened the scoring for the visitors.

Ollie Watkins briefly gave the home side hope when he made it 2-1 with nine minutes remaining, but Lingard’s second two minutes later effectively finished the game.

Dominic Calvert-Lewin got back on the goal trail as Everton held on to win 2-1 at Leeds.

The striker notched his first goal in eight league games to take his tally for the season to 12 after captain Gylfi Sigurdsson had given the visitors an early lead.

The Toffees rode their luck after Raphinha pulled one back for Leeds soon after the interval, but held on to register a fourth successive away win in the league for the first time since 1985.

Odes to pain and pleasure