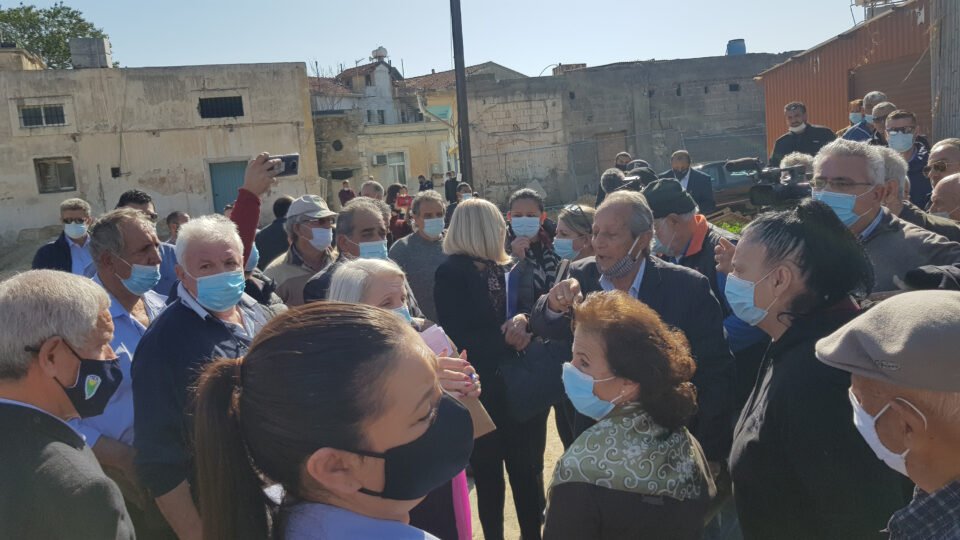 Paphos police intervened to restore calm following tense verbal confrontations that took place in Moutallos on Friday at a protest during a visit by members of the parliamentary committee for refugees.

Earlier this week, the mayor of Paphos hit back at MPs and other attendees at Tuesday’s session of the House refugee committee, calling them out for ‘political cannibalism’ and ‘personal insults’ in the long-running row over the use of Turkish Cypriot properties.

The committee is overstepping the mark for political reasons and going far beyond its role in exercising parliamentary control, Phedonas Phedonos said on Wednesday.

The visit is part of an inspection of works carried out in the area, which have provoked protests from refugees who have been granted either housing or facilities to live after their displacement.

Protesters held up placards daubed with slogans such as: “respect and dignity for the legal rights of refugees”, “you drowned us in the parking lots”, “end to the dictatorship and the will of the Mayor of Paphos” and “the law on refugees is clear.”

One of the residents, Eleni Kosti, said that refugees live in the properties and they refuse to let the municipality take parts of their yards to construct yet another parking lot, destroying in the process the greenery in the area.

“He barges in here with bulldozers, uproots trees,” she said, adding that if the municipality takes more of these yards, even more trees will be cut down. “We have our dignity, we do not accept just anyone treating us this way,” Kosti said.

“What’s worse, they just show up without any warning and do what they want.”

Other residents said the municipality has cut off access to homes, demolished fences, even rooms.

According to CNA, Skevi Koukouma, chairwoman of the parliamentary committee for refugees and missing persons, said that the members of the committee saw for themselves the anger and rage of the citizens over the way they are treated by the municipality, and that they were demanding respect for the refugees.

There are procedures in place to follow, she stressed.

“We saw people whose sanitary facilities have been demolished and were then told, “do whatever you want, build it yourself. Such behavior is unacceptable, and without the relevant consultation. The ministry must assume its responsibilities,” she said.

She added that the municipality has no remit to proceed to intervene or to demolish anything without the approval of the ministry.

Phedonos described the visit a ‘resounding failure’ and added that for the sake of political purposes aimed at maintaining relations with a small number of refugees, the committee was prepared to sacrifice ‘everything’, as long as micro-political and client interests were temporarily served, he said.

The mayor stressed that the visit only confirmed that the House refugee committee was part of the problem of the management of T/C properties, and not a solution.

“It supports a timeless policy and practice which fosters or tolerates illegal uses, leases and sub-leases, looting property through both blurred and transparent procedures resulting in the unequal treatment of thousands of refugees in favour of a few privileged people. The committee is proving weak and unable to make a positive contribution to the management of such a large and important issue for our country.”

By not exercising effective parliamentary control, thousands of refugees are still left without any property, while some refugees and non-refugees continue to own and distribute hundreds of acres of land or even several premises each, the mayor said.

Calling the visit a ‘fiasco’ Phedonos also called out the committee for undermining the difficult work of the municipality to remove the illegalities that have been a chronic problem in Paphos for decades.

The debate will continue in parliament next Tuesday in the presence of the minister of interior, who is expected to give answers and solutions.

Meanwhile, Diko MP, Zacharias Koulias, said that “all the interventions of the mayor within these properties are completely illegal and arbitrary”, adding that “the behavior of the district administration and perhaps the ministry of interior is considered unacceptable”.

He added that Diko would submit a proposal to remove the right to grant Turkish Cypriot land to any local government.