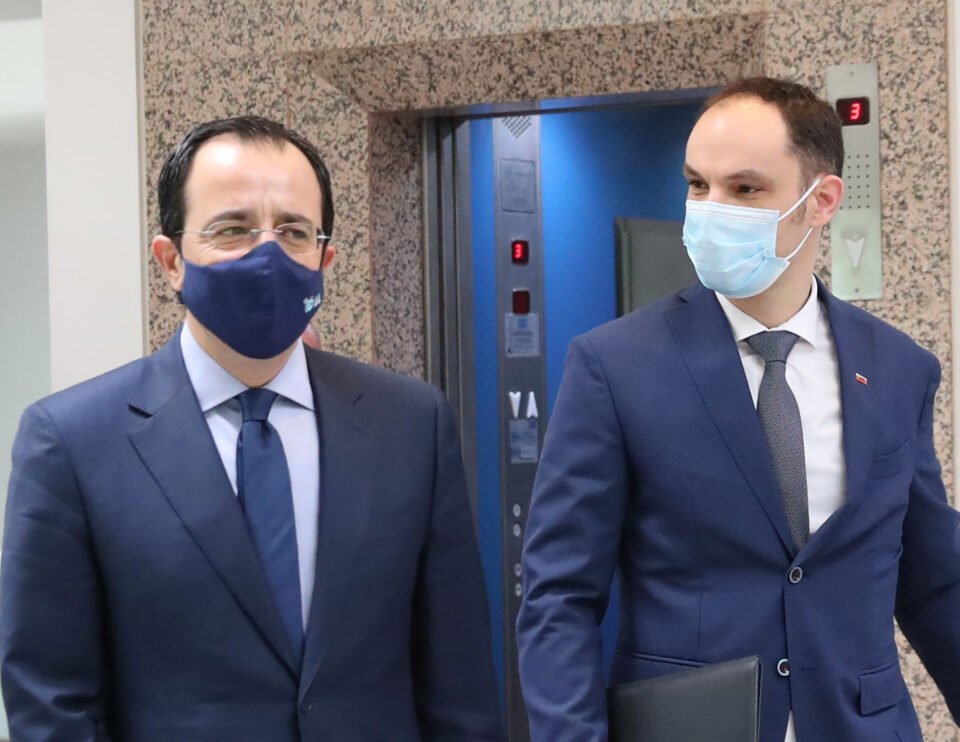 Anže Logar is having in Nicosia with his counterpart Nikos Christodoulides

Bilateral ties, EU issues and the Cyprus problem were on the agenda of the consultations the Slovenian FM Anže Logar in Nicosia with his counterpart Nikos Christodoulides.

The Slovenian minister who`s is on a working visit, also met President Nicos Anastasiades around noon in his residence in Limassol.

The minister had a tete-a-tete meeting with Christodoulides, which was followed by consultations between the delegations of the two countries.

In statement afterwards, Christodoulides said he briefed Logar on the current state of play in the UNSG’s efforts to resume negotiations.

“Anže fully understands the importance of ensuring that a comprehensive settlement must be in line with UN Security Council Resolutions, the UN Charter, EU law values and principles, and that a reunited Cyprus must be a functional state, a viable member state of the EU, and a stable, reliable actor in its region,” said Christodoulides.

He went on to say that as Slovenia prepares to assume the presidency of the Council of the European Union in the second half of 2021, “during these peculiar and challenging circumstances created by the pandemic”, that call for European solidarity and resilience, “Anže’s visit is both timely and valuable”.

In his statements, the Slovenian FM said that he had an excellent talk with his counterpart, noting that small EU member states should cooperate thoroughly to address the issues of mutual interest that for some other states might not be so important.

He said he had presented his country’s presidency priorities in dealing with the pandemic, the cybersecurity threats and risks adding that Slovenia looks forward to Cyprus’ support.

He also referred to the talks for the new asylum and migration directive adding that we need to hear the voice of countries like Cyprus which are on the frontline. He said that this issue was a hot potato but Slovenia would do its utmost to find a comprehensive solution that responds to the challenges.

Earlier Saturday, Logar met Anastasiades at his home in Limassol.

Speaking after the meeting, Anastasiades said the main focus was Slovenia’s upcoming presidency of the EU and what he called the bloc’s obligations towards member states at a critical turning point on the Cyprus issue.

Anastasiades also referred to the visit by Britain’s Foreign Secretary Dominic Raab on Thursday and the upcoming visit by Greek PM Kyriakos Mitsotakis on Monday ahead of the informal five-party conference on Cyprus next month.

The message to the Turkish Cypriot side, he said was that if “if they really want a peaceful solution to the Cyprus problem, they should help not to satisfy Turkey’s demands, but rather those of all Cypriots”.

“What I convey to all our interlocutors is one thing; our determination and political will to participate in an informal meeting without preconditions,” he said.

Counting down to Season 2 of ‘Tia Does Agrotourism’