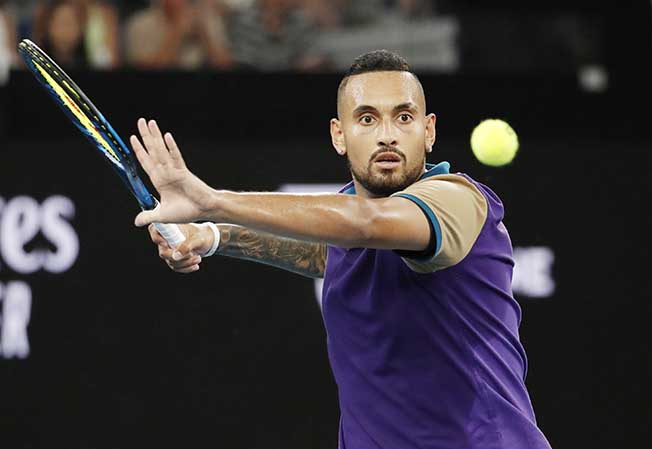 Nick Kyrgios first reached the fourth round in Melbourne when he was 19, as part of a storming run to the quarter-finals, but the former junior world number one has never made it to the second week of a major since

Nick Kyrgios will attempt to reach the fourth round of his home Australian Open for only the second time since 2015 on Friday, but standing in his way is Austrian third seed Dominic Thiem.

Kyrgios first reached the fourth round in Melbourne when he was 19, as part of a storming run to the quarter-finals, but the former junior world number one has never made it to the second week of a major since.

Despite a few notable victories and flashes of brilliance, the temperamental 25-year-old has often made headlines for the wrong reasons and achieved little for all his potential — but he is thriving on the energy of the home support.

Backed by a vociferous crowd, Kyrgios saved two match points in an epic comeback to beat Ugo Humbert in five sets but the Australian said it would take more than noisy support to beat reigning U.S. Open champion Thiem.

“No doubt he’s overcome some crowds against him… He’s one of the players that loves to thrive in big-match situations,” Kyrgios said as he looks to end a seven-match losing streak against top-five players at Grand Slams.

“You’re not going to make Grand Slam finals and win slams if you’re going to be scared of a little bit of an Aussie crowd.”

Serena Williams continues her quest for a 24th major and will fancy her chances of progressing to the next round when she takes on Russian teenager Anastasia Potapova, who she trounced 6-0 6-3 in the first round last year.

Ons Jabeur said last month she was fed up of quarter-final exits and is targeting a top-10 spot this year but the Tunisian 27th seed will have her work cut out when she faces third seed Naomi Osaka.

The first night match at Margaret Court Arena will be an all-Canadian affair with friendships and camaraderie set aside when 11th seed Denis Shapovalov faces off against Davis Cup team mate Felix Auger-Aliassime.

“Canadians never want to play Canadians, but in the end it happens so often that we kind of just treat it the same way,” Shapovalov said.

Order of play on the main showcourts on the fifth day of the Australian Open on Friday (play begins at 0000 GMT, prefix number denotes seeding):