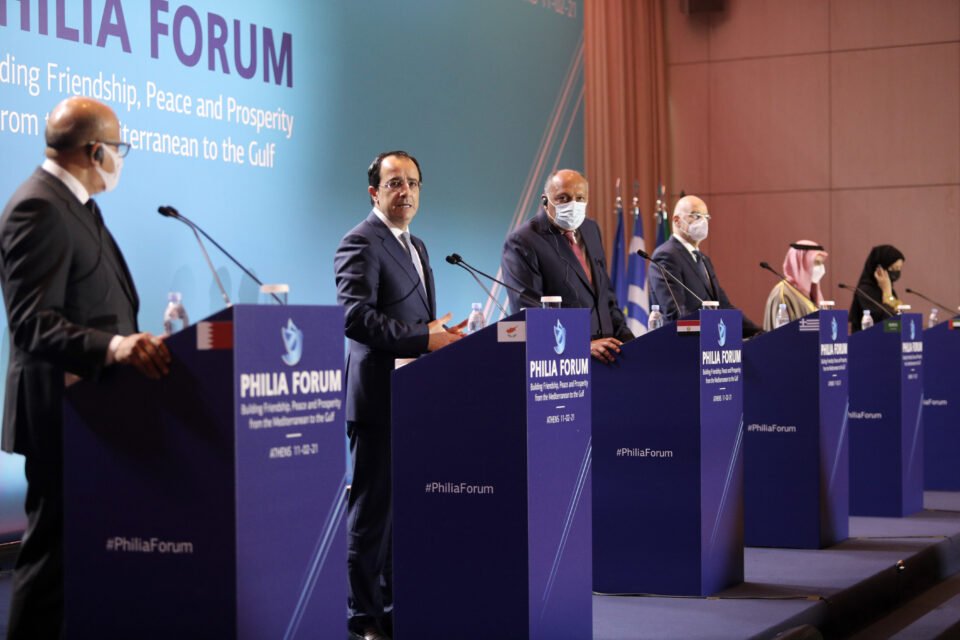 Regional problems and challenges require solutions coming from the region itself, Foreign Minister Nikos Christodoulides said on Thursday during a meeting in Athens with his counterparts from Mediterranean and Gulf countries.

He was addressing Philia (friendship) Forum, a gathering in Athens of the foreign ministers of Greece, Cyprus, Egypt, the United Arab Emirates, Bahrain, Saudi Arabia and France. The forum is part of effort to promote and consolidate multilateral ties of friendship and cooperation among partner countries in the wider region, extending from the Mediterranean to the Gulf.

The fact that the meeting took place with the participants’ natural presence under pandemic conditions, Christodoulides said, “demonstrates the importance we all attach to the synergies that have been carried out and our commitment to deepening regional cooperation with a single objective: to build conditions of security, cooperation, peace and stability on the basis of a positive approach, without restrictions, inclusive and without zero-sum approaches.”

Stressing the importance of regional cooperation, Christodoulides said that “no country can face alone the enormous economic, geopolitical and other challenges that lie before us.”

He said that they exchanged views on several issues of concern to the countries and, by extent, the region. “It is our common belief that it is only with partnership that problems and individual conditions of instability can be managed, but also to make the most of the prospects that exist in our region.”

Christodoulides reiterated that both the actions and the extended meetings held at regular intervals, “are not in the nature of a zero-sum game, nor are they aimed at excluding any country.” On the contrary, he said, they are open to all countries wishing, based on a positive agenda, to help deepen cooperation and, by extension, peace in the region. This is also demonstrated by the ever-expanding participation, he added.

The minister welcomed the commitment of all his counterparts towards continuing and further deepening this cooperation. “I firmly believe that regional problems and regional challenges require solutions coming from the region.”

Christodoulides also argued that while the international narrative for the region is characterised by confrontations, problems and conflicts, the countries of the region are building an alternative narrative through their cooperation. “That of synergies, cooperation, the common vision for a region that prospers, develops, is characterised by stability and resolves any problems and differences with dialogue, always within the framework of international law, the need to maintain good neighbourly relations and away from any approaches reminiscent of other times, aiming to impose solutions outside the framework of diplomacy and international law.”

Greek Prime Minister Kyriacos Mitsotakis said in his address that the meeting was an example of harmonious transnational cooperation, based on the United Nations fundamental values. He said the partnership between the countries was vital to connect Mediterranean countries with those in the Red Sea and the Arabian Gulf.

“The cooperation within this new group serves the common interest of our countries, promoting prosperity in the region and laying the foundations for a broad, ambitious, positive agenda,” he said.

The Greek premier also referred to the Cyprus problem and called for a functional and sustainable solution based on the UN resolutions and the European acquis.

While at the summit, Christodoulides held separate meetings with his Bahraini and Egyptian counterparts, Abdullatif bin Rashid Al Zayani and Sameh Shoukry respectively. He discussed with his counterparts how to advance bilateral relations among other things.