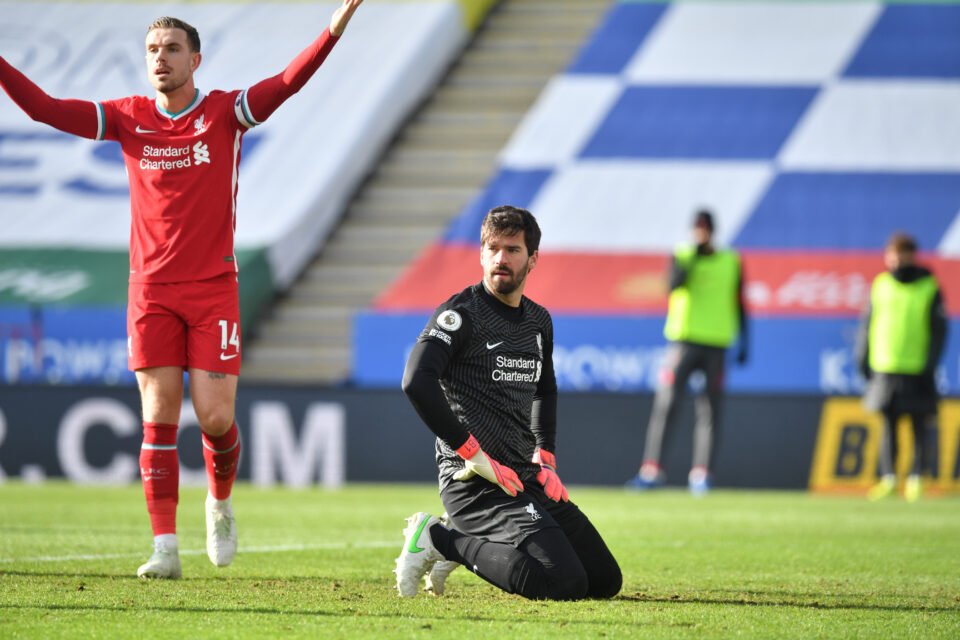 Liverpool's Jordan Henderson and Alisson react after conceding a goal

An error by Liverpool goalkeeper Alisson helped Leicester come from behind to earn a 3-1 win on Saturday, with the champions losing three successive Premier League games for the first time since November 2014, when they were managed by Brendan Rodgers.

Liverpool were again forced into a defensive reshuffle due to Fabinho’s injury, with January loan signing Ozan Kabak handed his debut. The 20-year-old’s slip let Jamie Vardy in in the first half, only for the Leicester striker to hit the crossbar.

It was Trent Alexander-Arnold’s turn to hit the woodwork from a free-kick just after the interval before Mohamed Salah finally broke the deadlock in the 68th minute after being set up by a superb Roberto Firmino backwards flick.

After VAR had overturned a penalty awarded to Leicester, James Maddison equalised from a free-kick, before Alisson, who made two glaring errors in Liverpool’s loss to Manchester City last weekend, cost his side again.

The Brazilian came flying out of his goal to meet a long ball over the top but collided with Kabak and allowed Vardy in to score in the 81st minute.

Harvey Barnes made sure of the win four minutes later to complete another miserable afternoon for Liverpool.

Viva Versace: a marriage of decadence and rock ‘n’ roll