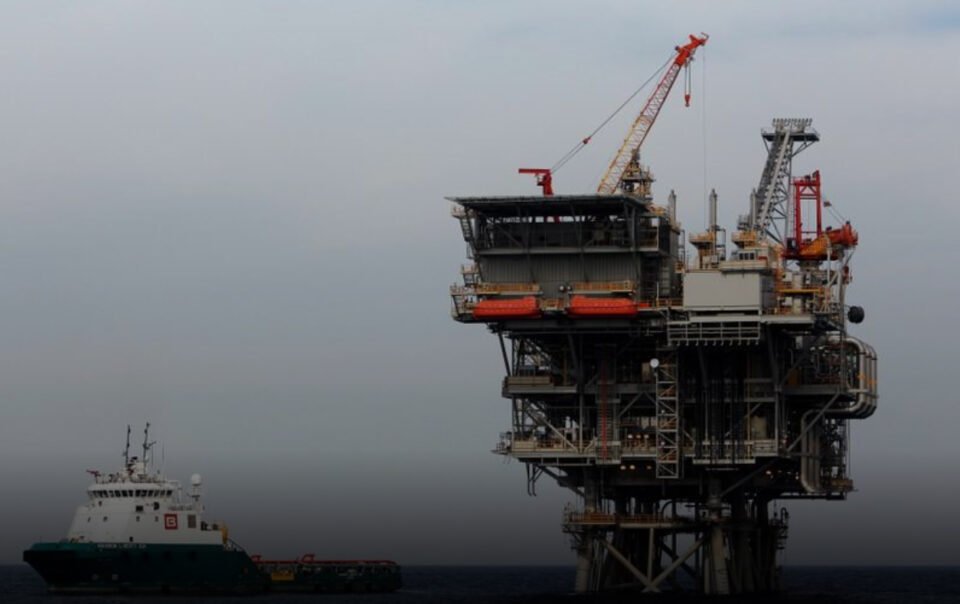 An Israeli gas platform in the Mediterranean sea, some 24 km west of the port city of Ashdod

While by no means a death blow to Cyprus’ aspirations to export natural gas to Egypt, a recent investment decision by companies in nearby Israel to expand pipeline capacity doesn’t exactly bode well for the island as it struggles to jockey for position in a hydrocarbons-rich region.

In late January Chevron with Delek and their partners in Israel’s Leviathan and Tamar gas fields, inked a deal to invest $235 million in a new subsea pipeline, expanding existing facilities. According to an announcement by Delek, the pipeline will connect facilities at the Israeli city of Ashdod to the East Mediterranean gas (EMG) pipeline at Ashkelon, enabling Chevron and its partners to increase gas exports to Egypt to as much as 7 billion cubic metres (bcm) annually.

The partners had signed agreements last year to export as much as 85 bcm a year to Egypt over a 15-year-period. Gas supplies from Israel to Egypt started in January 2020.

Asked about this, a government source said one can’t compare Cyprus’ activities to Israel’s as the latter are in “another stage of development”.

“Cyprus isn’t yet in a position to export, so I’d call it a case of apples and oranges,” said the source who requested anonymity.

“The Israelis are on a different track altogether vis a vis their collaboration with Egypt, but I wouldn’t say that necessarily has an adverse impact on Cyprus.”

So is there any tangible movement on the hydrocarbons front?

“We are in constant contact with the Emgf (EastMed Gas Organisation), scheduled to come together again in early March,” the source offered.

The Emgf is an organisation formed by Cyprus, Egypt, Greece, Israel, Italy, Jordan and Palestine. It was established as an international body in January 2020 with headquarters in Cairo.

Though touted as an international forum promoting multilateralism in the region, observers have described it as little more than a talking shop.

The source said the objective remains for Aphrodite gas to be piped to Egypt, to the liquefaction plant in Idku, from where it would be exported to markets in its super-chilled form.

Idku is the same facility where the Israeli gas will be sent for liquefaction. But that, the source noted, won’t be to the exclusion of future Cypriot gas:

“Idku has a great deal of capacity.”

Meantime the government is “working closely” with Chevron and Shell, co-operators of the Aphrodite gas play in block 12 of Cyprus’ exclusive economic zone.

Development plans have been sidetracked due to the coronavirus pandemic, but not shelved.

The next step on the cards is the A3 appraisal drilling at Aphrodite, expected “around the end of 2021”. No firm date exists.

This would be followed by the Front–End Engineering Design (Feed) and then, lastly, by a final investment decision.

“As things stand, Cypriot gas will start being piped to Egypt in the 2025 to 2026 timeframe,” the source said.

Also towards the end of the year – likewise a tentative timeframe – French multinational Total plan an offshore exploratory drill at a site dubbed ‘Kronos’; and Exxon are eyeing an appraisal drill in their block 10 concession.

In late January energy minister Natasa Pilides attended a six-way teleconference with counterparts of countries interested in the EastMed pipeline. Conspicuously absent from the subsequent press release was any mention of progress in the pipeline project itself – the six ministers agreed to “hold another meeting in the near future to further this cooperation which would also promote collective action and collaboration in the fields of renewable energy and alternative fuels as well as encouraging joint pilot projects.”

This occurred just days after news of the additional investment in the Israel-to-Egypt route.

Queried as to whether the Israeli-Egyptian bilateral actions undermine the EastMed project, the Cypriot source said “I don’t think so. On the highest political level Israel remains committed to the project.”

The EastMed entails a 1,900 km natural gas pipeline to connect the gas reserves of the eastern Mediterranean to Greece. The pipeline includes 1,300 km of offshore and 600 km of onshore sections. It will transport natural gas from the Levantine Basin in Israel and gas fields in Cypriot waters to Greece and Italy.

The project includes a 200km offshore pipeline section that will start from Israel’s Leviathan gas field and end in Cyprus, connecting the Aphrodite gas field.

“Although Delek made a big to-do in their press release, all it signifies is that the Leviathan and Tamar partners expanded capacity to meet their contractual obligations for 85bcm delivery to Egypt over 15 years. Without the upgrade, the partners would have fallen behind the agreed delivery amounts.

“So this was already on the cards, on its own no game changer.”

But it does serve as a reminder that Cyprus lags behind Israel as a gas supplier to Egypt.

Moreover, the Idku LNG plant can only handle so much capacity. And right now Egypt faces a glut – domestic demand for gas is down, renewables usage is up, while excess gas for exports has built up from ENI’s Zohr super-giant gas field.

In fact because of the glut the Egyptians plan to shortly bring online their second LNG plant in Damietta.

“So do all these developments crowd out future gas from Cyprus? Possibly, but realistically speaking Cyprus’ chances were slim to begin with – the price of Cypriot gas processed in Egypt would be too high to compete in markets.”

It’s also understood that the Israel-Egypt gas deal has a political and security component to it. Egyptian state security services have a major stake in Delphinus, the entity buying up the Israeli gas. By the time Israeli gas even gets into the Egyptian pipeline system it already costs about $6 per mmbtu.

“The Egyptians are paying over the mark compared to what natural gas goes for in their domestic market,” said Ellinas.

“And there must be a reason for that – the political/security angle vis a vis their relations with Israel – a factor missing in the Cyprus-Egypt nexus.”

However the analyst does not see the Israel-Egypt gas deals as undercutting the mooted EastMed pipeline project.

That’s because although the EastMed would likewise get fed from Israel’s Leviathan field, the latter has a great deal of spare capacity – enough gas to be sold to Egypt and elsewhere.

Rather, the issue with the EastMed, said Ellinas, has always been its technical feasibility and the price tag.

Last but perhaps not least, there are murmurs of a thaw in Israeli-Turkish diplomatic relations. And that in turn could re-inject life into the idea for an Israel-Turkey gas pipeline.

This, Ellinas suggested, could go a long way in accounting for President Nicos Anastasiades’ official visit to Israel this weekend.

People can change, the message as prison schools mark end of year

Unions say government has backed down over minimum wage

Triumph for Cyprus in Birmingham