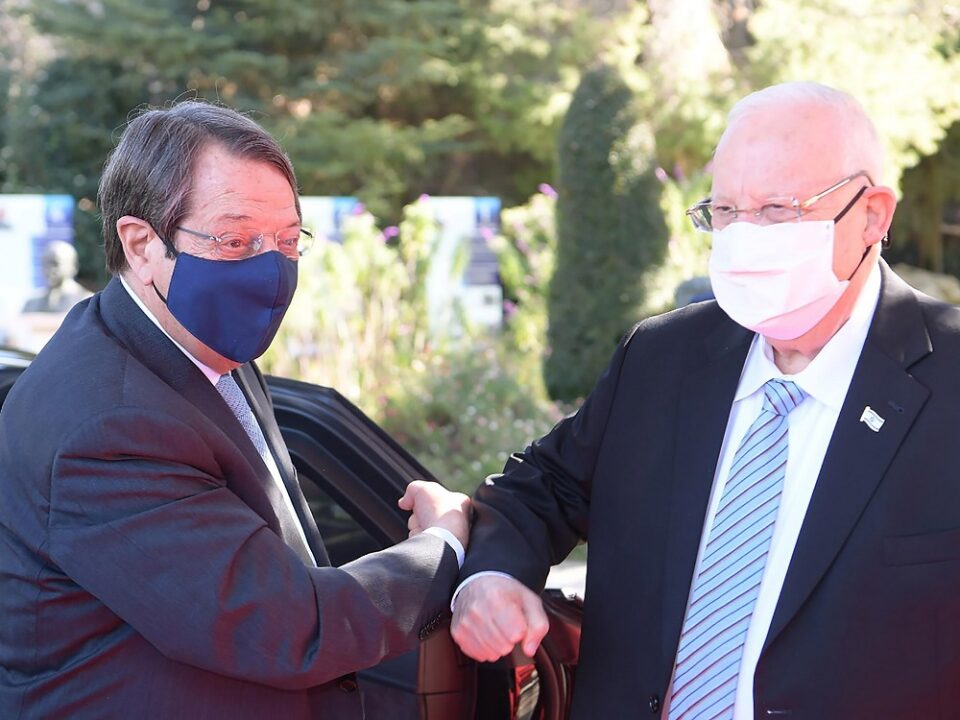 Flights and tourism between Israel and Cyprus will resume as soon as conditions allow, the two countries’ presidents said on Sunday following a meeting in Jerusalem.

Anastasiades, who is escorted by the ministers of foreign affairs, defence and energy and the deputy minister of tourism, is set to meet in the afternoon with Prime Minister Benjamin Netanyahu.

Following their meeting, Rivlin welcomed Anastasiades back to Jerusalem.  “You have been a dear friend to me, and to the state of Israel,” he said, adding that the warm relations between the two countries are based on their shared history, values and interests.

“Our shared values, including democracy, human rights, and the rule of law, bind us together, in a region where these values are not always respected,” Rivlin said. “And our shared interests continue to grow in many fields, from diplomacy and security to trade, tourism, energy, emergency response, innovation and the environment.”

Citing the challenges faced due to the coronavirus, Rivlin stressed the importance of cooperation.

“In this context, let me say how pleased I am with the recent understandings that will allow the renewal of flights and tourism between Israel and Cyprus,” he said. “Israelis love Cyprus so much, and call more countries to adopt the Green Passes.”

This statement follows an accord signed between Israel and Greece on Monday to ease travel restrictions there on Green Pass-bearing Israelis. With more than 41 per cent of Israelis having received at least one shot of Pfizer Inc’s vaccine, Israel has said it will partially reopen hotels and gyms on February 23 to those fully inoculated or deemed immune after recovering from Covid-19. To gain entry, these beneficiaries would have to present a “Green Pass”, displayed on a Health Ministry app linked to their medical files. The app’s rollout is due this week.

No dates have been given, however, for the implementation of the deals with Cyprus.

Later in the day, Israel’s Foreign Minister Gabi Ashkenazi welcomed Cyprus’ decision “to open the skies for tourism to both countries.”

He said the two countries were in the process of writing the protocol on how to do it, and for the recognition of the Israeli vaccine protocol.

“Cyprus is a very popular destination for Israelis; last year we had 300,000 visitors in your wonderful island,” he said after a meeting with his counterpart, Nikos Christodoulides.

Anastasiades said, among other things, that it was a great pleasure to be back in Israel, also stressing the importance of cooperation during the pandemic.

“I am very pleased about the level of people to people contacts. We hope that soon the epidemiologic condition in both our countries will allow us to resume the flow of visitors between Cyprus and Israel, ” he said.

He also expressed deep appreciation for the assistance Israel has provided to Cyprus in the course of the pandemic.

Anastasiades said that as regards bilateral relations, the two countries have reached a very prolific partnership. “We are particularly advanced in the areas of energy, defence, tourism, health and education but the wider issues on which we are currently working together showcases the great significance we both place on our cooperation as well as its potential.”

Rivlin also referred to the commemoration two years ago of Cyprus’ role as a home for many Holocaust survivors and illegal immigrants to Israel following the World War II and both their recent participation in the opening of the Pafos Innovation Institute. “A centre for joint projects, between our two countries, and between all the peoples of the region,” Rivlin said.

He also referred to the two countries’ strategic trilateral cooperation with Greece, especially in the energy sector, which he said, was “a key component of regional stability and economic development.”

The delegations of the two sides held an expanded meeting.

How magnesium impacts anxiety and depression