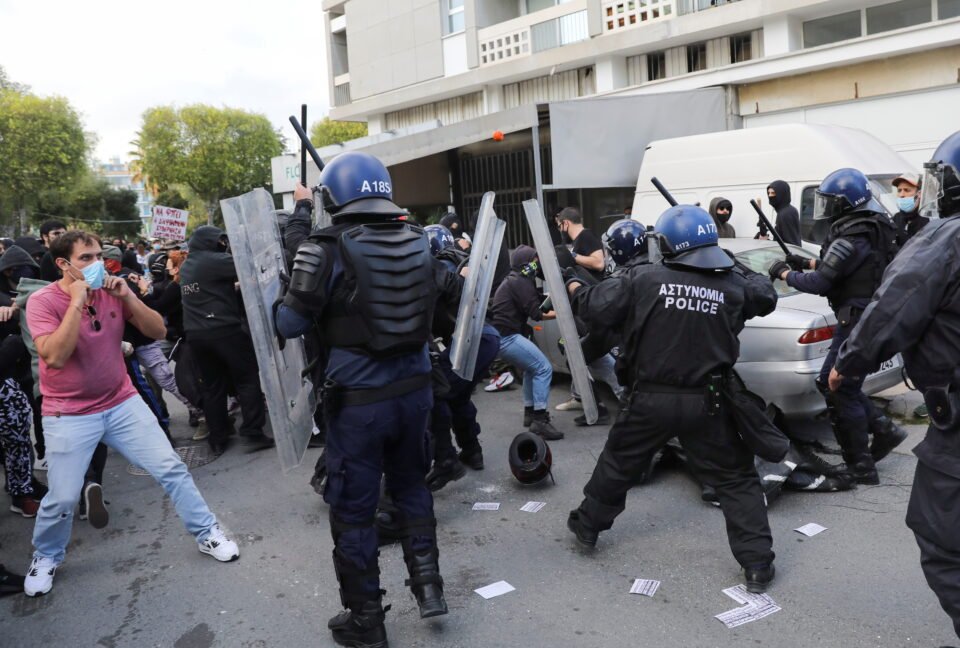 Protesters and activists clash with riot police during a rally against corruption and COVID-19 restriction measures, in Nicosia, Cyprus February 13, 2021. REUTERS/Yiannis Kourtoglou

Opposition parties called for the justice minister’s resignation on Monday following accusations that police had unnecessarily cracked down on demonstrators using excessive force and injuring several people, including a 25-year-old woman who could have her vision impacted.

Yiolitis, who was also being grilled by members of the House human rights committee on a separate matter, reiterated that extreme behaviour had no place in the police.

“From the pictures I saw, it appears the necessary proportionality is absent,” the minister had said earlier. “However, this will be determined from the procedures in progress.”

Of the calls for her resignation, Yiolitis said it was at the disposal of the president every day.

The minister and the police leadership were censured by MPs after they declined to say who had instructed the riot squad to use force during Saturday’s demonstration.

“Certainly, there were no instructions for this kind of suppression,” Yiolitis said.

She said demonstrations might be banned but it did not mean the police should react with force.

Responding to a question, the minister said she lost her sleep on Saturday night, and Sunday, because of the events.

Yiolitis said she called the 25-year-old and wished her all the best.

Earlier on Monday, a police spokesman said a probe would determine what had happened.

“We have one and only one position: we have asked the independent authority for the investigation of claims and complaints against the police to conduct a probe to show whether excessive or disproportionate force has been exercised against anyone by members of the police,” Christos Andreou said.

He said the watchdog’s investigation would ensure the “objective and impartial” examination of the issue and the conditions in which the incidents took place.

The investigation was requested by the chief of police shortly after the events.

The attorney-general green-lighted the probe, asking the watchdog to appoint criminal investigators. They are expected to be appointed on Wednesday.

Demonstrations are banned for health and safety reasons though participants said people were wearing masks and trying to keep their distance.

They said it was a peaceful march until the police decided to break it by attacking the participants.

Videos and photos from the Saturday afternoon demo showed a woman hit in the face by the high-velocity stream of water released from the water cannon, several officers manhandling a man on skates who was apparently doing nothing at the time, and another man with a bloody gash on his head. Another picture showed three officers trying to subdue a protester, one holding him down by apparently stepping on his chest or throat. 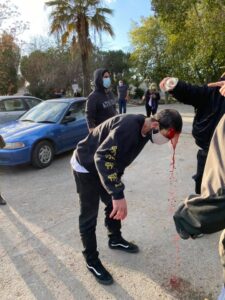 Andreou said officers on duty are called upon to make split-second decisions and have no time to communicate with their seniors for instructions.

“In many cases our members are in danger and they are forced to act, use proportionate force as we say, in particular cases.”

Police rank and file appeared irked by the universal condemnation and what they saw as lack of support from their leadership.

In a statement on Sunday, their union suggested that hooded individuals threw stones, a reference heard for the first time. A participant in the demo told the Cyprus Mail that stones and citrus fruit were hurled at the riot squad after they attacked the crowd.

The statement, which was directed at their leadership and politicians, said ordinary officers were following orders based on decrees and laws that others decided.

“Let us make one thing clear to everyone, ordinary people, our leadership, the political leadership and the rest of the politicians: keep your arrows away from ordinary workers, the rank and file officers, and security forces.”

It was reported later Monday, that members of the riot squad were returning their gear to protest being left without support from their superiors.

The officers believe they are being made scapegoats with those who planned the operation refusing to come clean.

Daily Politis said members of the riot squad have complained about assistant to the chief of police Panicos Antoniou who coordinated the operation and has failed to assume responsibility for the instructions given to officers.

Main opposition Akel MP Eleni Mavrou said the violence in the streets of Nicosia was discussed by the House human rights committee despite not being on the agenda on Monday.

Mavrou said sheer luck was the only reason there were no casualties, describing the events as “unprovoked institutional violence for which no one would assume responsibility. It is obvious that the police attack against citizens was pre-decided.”

Mavrou said no one would say who gave the instructions and there was an attempt to transfer the blame on the rank and file.

“The administration is dangerous for democracy and the least the minister could do today is to assume her responsibilities.”

Diko MP Christos Orphanides said people’s accounts, photos, and videos, confirmed the police had used excessive force. He said the investigation could and should be completed in 24 hours. The political responsibility should be assumed with the resignation of the justice minister, he said.

“Unfortunately, we witnessed a dangerous deviation from democracy and the behaviour of an autocratic regime. The Disy government should stop using the health crisis as pretext to silence the criticism against it.”