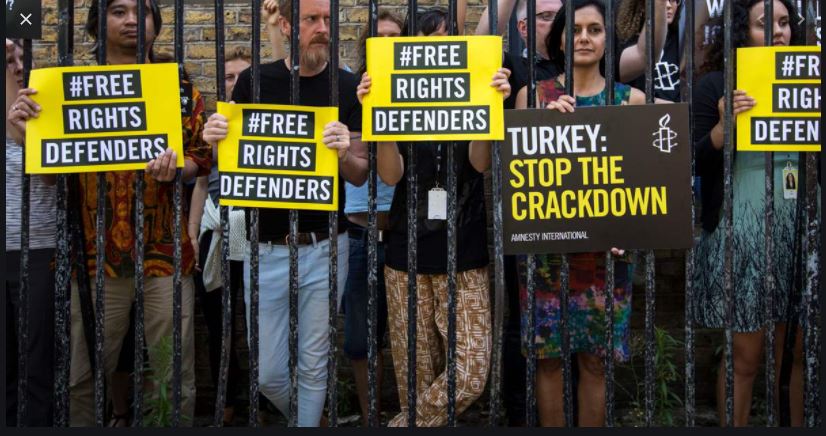 Every Friday since November, a group of activists founded by Turkish lawyers in Europe have gathered before the European Court of Human Rights (ECHR) as part of the ‘Movement for Unconditional Justice’. Their goal: bring Turkey’s judicial plight and rights violations to the attention of Europe’s top human rights court.

“Detaining lawyers has become routine practice in Turkey, deepening the climate of fear and repression across the country. Lawyers are also coming under physical, sometimes fatal, attack,” warns Stefan Simanowitz of Amnesty International

Turkish lawyers have been among the primary victims of an ongoing government crackdown implemented in the aftermath of the failed military coup back in 2016, in which 250 people were killed. The Turkish government accuse them of representing clients who had links to the network behind the coup, with President Tayyip Erdogan speaking last September of the need to ‘cut the road from lawyer to terrorist’. Straight after his speech, 115 lawyers from different groups were detained. Over the last decade, Turkish courts have handed down 2,728 years of prison sentences to 441 attorneys.

Roisin Pillay, Director of the International Commission of Jurists (ICJ) said that ‘lawyers should never be arrested or sanctioned for representing their clients, or identified with their clients’ causes.’

The detentions are just one facet of an ever-escalating series of hurdles placed before the country’s lawyers. Policymakers have passed a law changing the structure of bar associations, with the purpose of reducing the power and influence of the three main organisations (Istanbul, Ankara and İzmir) by forming alternative, government-run associations.  What’s more, thousands of judges and prosecutors have been fired as a part of a systematic disintegration of the rule of law. According to the World Justice Project index for 2020, Turkey now ranks 107 out of 128 countries for the rule of law.

The Movement for Unconditional Justice explain on their website that the reason issues need to be taken to the ECHR is because the current situation of the judiciary in Turkey leaves ‘no possibility for domestic legal remedies’. They describe national trials as ‘theatrical productions’ where judges have become ‘extras of this play’.

Detaining lawyers has become routine practice, deepening the climate of fear and repression across the country, leading to a sort of vicious cycle. The more lawyers are detained, the more difficult it is for the remaining lawyers, captivated by fear, to fight this battle. ‘The job of the human rights lawyer is increasingly vital in Turkey,’ said Stefan Simanowitz of Amnesty International, ‘More vital but ever more dangerous. If lawyers lose their voice, citizens lose their breathe.’

As well as campaigning for the release of detained lawyers, the movement have taken steps to encourage the ECHR to take concrete action on hundreds of unimplemented European judgments. Regardless of Ankara’s current outlook on the ECHR, Turkey are bound as signatories of the European Convention on Human Rights to nationally implement decisions of the European court. If this is not enough, membership of the European Council also necessitates compliance with the court.

So far, 184 ECHR judgments are pending full implementation, leaving Turkey second only to Russia in the domain of failing to execute ECHR judgements. Enes Kabadayi, member of the movement and previously detained lawyer said that ‘these figures alone show where Turkey is at in terms of the state of law. Looking at the de facto situation,’ he added, ‘these figures reflect a troubling truth.’