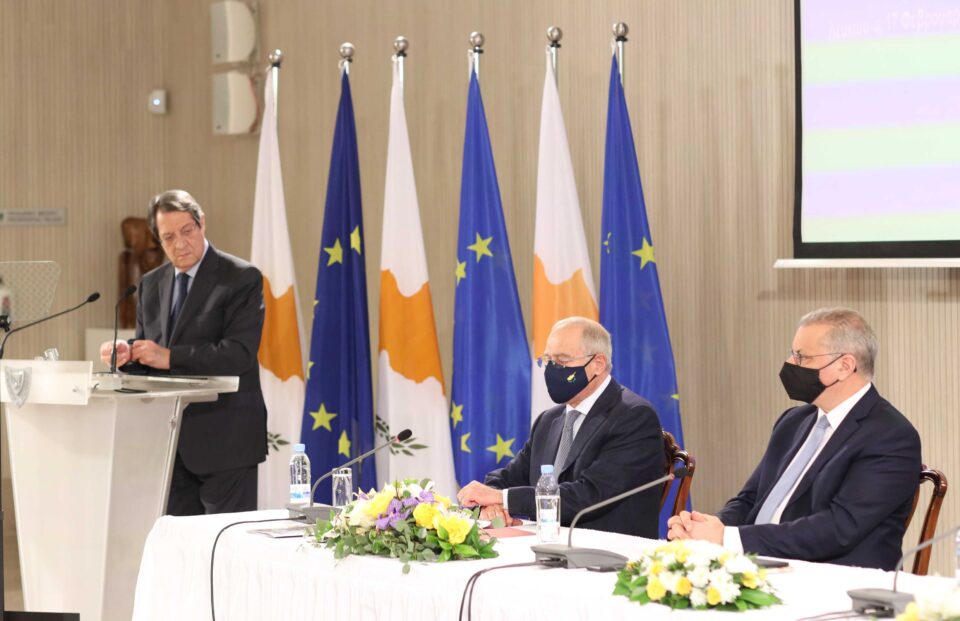 President Nicos Anastasiades during the news conference on Wednesday (PIO)

With an emphasis on rural areas and young people, the government on Wednesday unveiled new housing schemes and incentives it said would boost the economy and entrepreneurship.

“By dealing with the problems in a comprehensive way we aspire in the near future to make areas now considered disadvantaged compared to urban and coastal areas into attractive places for permanent residence for young families, investors and businessmen but also to reverse rural depopulation and safeguard the viability of small and medium sized enterprises,” the president said.

He also spoke extensively on what has been done to date, including through the national strategy on Troodos mountainous communities which this year will also cover other mountainous areas, public benefit projects particularly as regards health, incentives offered by the deputy ministry of tourism for rural areas and road projects.

The first is a continuation of that which came into force in July 2019 and which has so far received 226 applications at a cost of €6.5m. The new scheme will be extended to another 130 communities, bringing the total to 258.  Beneficiaries will be entitled to financial assistance of up to €55,000 and additionally up to €15,000 for special construction such as retaining walls, and up to €10,000 for people with disabilities.

Scheme two, for the revival of specific rural areas, is new and covers an additional 128 communities, offering up to €20,000 for families of four members or more and up to €15,000 for people who live alone or families of up to three people.

Applications will open on March 1 and close on December 31.

In addition, the interior ministry will provide additional financial help – a minimum annual grant of €400 per family who live at least 40 km from an urban centre. The grant will increase proportionally to the distance (€400 for those living 40 to 59 km from a town, €500 for 60-79 km and €600 for more than 80 km).

The aim is to help cover transport costs to the towns for work or access to various services. The scheme covers 101 communities and applications will open on April 2.

The grant is in addition to that offered to those who live in the mountains at an altitude above 600 metres and which covers 110 communities.

Nouris said that 15 extra staff will be hired from the labour ministry’s unemployment lists to run a support office for applicants.

The interior minister also announced town planning incentives to boost small and medium sized enterprises. The first provides the option for shops to increase their space for commercial or office use by allowing conversion of the mezzanine (up to 40 square metres) for main use. The second reduces the cost of buying the required parking spaces by 50 to 70 per cent, depending on the area.

Stressing that the new measures were not one-off gestures, but part of a comprehensive policy launched in 2019, the minister said that the ministry would hold a series of information meetings in the countryside, starting with Solia on Friday.