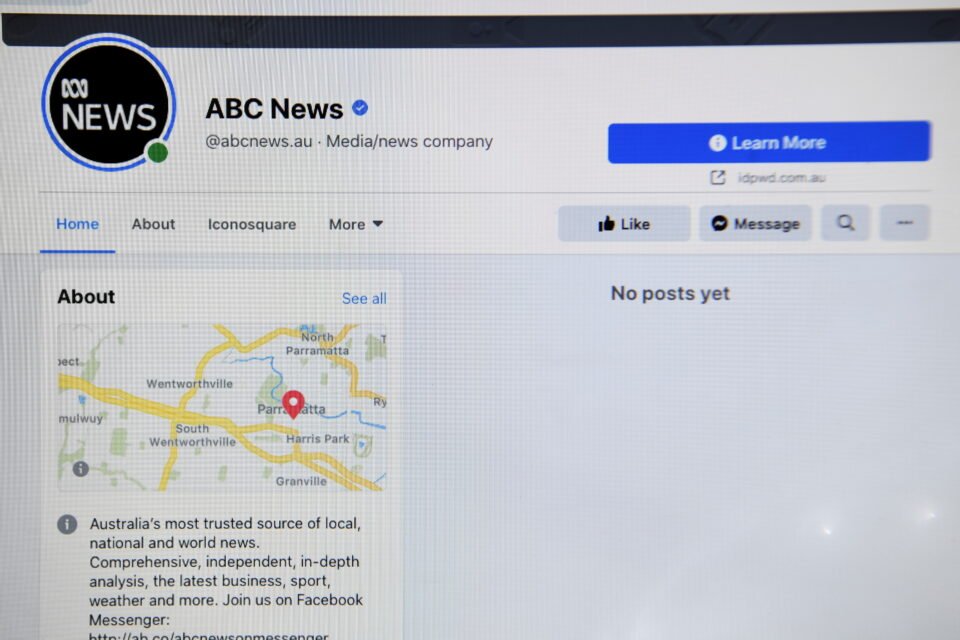 The ABC News Facebook page is seen on a screen in Canberra, Australia, February 18, 2021. AAP Image/Lukas Coch/via REUTERS ATTENTION EDITORS - THIS IMAGE WAS PROVIDED BY A THIRD PARTY. NO RESALES. NO ARCHIVE. AUSTRALIA OUT. NEW ZEALAND OUT.

Australians woke to empty news feeds on their Facebook Inc pages on Thursday after the social media giant blocked all media content in a surprise and dramatic escalation of a dispute with the government over paying for content.

The move was swiftly criticised by news producers, politicians and human rights advocates, particularly as it became clear that official health pages, emergency safety warnings and welfare networks had all been scrubbed from the site along with news.

“Facebook was wrong, Facebook’s actions were unnecessary, they were heavy-handed, and they will damage its reputation here in Australia,” Treasurer Josh Frydenberg told a televised news conference.

Frydenberg said Facebook Chief Executive Mark Zuckerberg gave no warning of the news shutdown when the pair spoke over the weekend about looming laws that will force both Facebook and search engine giant Google to pay local publishers for content.

The two men had a subsequent conversation on Thursday morning which was “constructive”, Frydenberg said, adding they discussed what he called “differing interpretations” about how the new Media Bargaining Code would work.

Facebook defended its actions saying that it blocked media content in Australia because the draft law did not provide clear guidance on the definition of news content and said its commitment to combat misinformation had not changed.

“The actions we’re taking are focused on restricting publishers and people in Australia from sharing or viewing Australian and international news content,” a company spokesman said.

“As the law does not provide clear guidance on the definition of news content, we have taken a broad definition in order to respect the law as drafted. However, we will reverse any Pages that are inadvertently impacted,” the spokesman said.

Facebook’s dramatic move represents a split from Alphabet Inc-owned Google after they joined together for years to campaign against the laws. Both had threatened to cancel services in Australia, but Google has instead sealed preemptive deals with several outlets in recent days.

Rupert Murdoch’s News Corp was the latest to announce a deal in which it will receive “significant payments” from Google in return for providing content for the search engine’s News Showcase account.

The Australian law would require Facebook and Google to reach commercial deals with news outlets whose links drive traffic to their platforms, or be subjected to forced arbitration to agree a price.

Facebook said in its statement that the law, which is expected to be passed by parliament within days, “fundamentally misunderstands” the relationship between itself and publishers and it faced a stark choice of complying or banning news content.

The tech giant has said news makes up just 4% of what people view on its website, but for Australians Facebook’s role in news delivery is growing. A 2020 University of Canberra study found 21% of Australians use social media as their primary news source, up 3% from the previous year, while 39% of the population uses Facebook to receive news. The same study said 29% of Australian news video content is consumed on Facebook.

The changes made by Facebook wiped clean pages operated by news outlets and removed posts by individual users sharing Australian news, three days before the country begins a nationwide vaccination program to slow the spread of COVID-19.

The Facebook pages of Nine and News Corp, which together dominate the country’s metro newspaper market, and the government-funded Australian Broadcasting Corp, which acts as a central information source during natural disasters, were blank.

Also affected were several major state government accounts, including those providing advice on the coronavirus pandemic and bushfire threats at the height of the summer season, and scores of charity and non-governmental organisation accounts.

“Demand for food relief has never been higher than during this pandemic, and one of our primary comms tools to help connect people with #foodrelief info & advice is now unavailable,” tweeted Brianna Casey, chief executive of hunger relief charity Foodbank.

“Hours matter when you have nothing to eat. SORT THIS OUT!”

By mid-afternoon, many government-backed Facebook pages were restored but several charity pages and all media sites remained dark, including those of international outlets like the New York Times, the BBC, News Corp’s Wall Street Journal and Reuters.

A Facebook representative in Australia did not reply to a request for comment on the situation. A later Facebook statement said the ban should not affect government pages but “as the law does not provide clear guidance on the definition of news content, we have taken a broad definition”.

Facebook’s own page was down for several hours in Australia before being restored.

“This is an alarming and dangerous turn of events,” said Human Rights Watch in a statement. “Cutting off access to vital information to an entire country in the dead of the night is unconscionable.”

Communications Minister Paul Fletcher said Facebook had sent the message to Australians that “you will not find content on our platform which comes from an organisation which employs professional journalists, which has editorial policies, which has fact-checking processes”.

Health Minister Greg Hunt called the move “an assault on a sovereign nation” and “an utter abuse of big technology’s market power”.

WILL BERRYMAN, CEO OF THE ROYAL INSTITUTION OF AUSTRALIA, PUBLISHER OF COSMOS SCIENCE MAGAZINE in a statement:

“We hope that Facebook remedy this quickly, because we’re in the business of sharing important, science-based information at a critical time, and it serves no-one’s interest to have that lost and replaced by unchecked stories.”

“Facebook blocking news in the middle of a pandemic, when accurate information is a key plank of the public health response really tells you all you need know about how much (Facebook CEO Mark) Zuckerberg cares about Australian society and cohesion.

“Facebook is telling Australians that rather than participate meaningfully in regulatory efforts, it would prefer to operate a platform in which real news has been abandoned or de-prioritised, leaving misinformation to fill the void.”

“There’s been a lot of analysis done about whether Facebook becomes a much more diminished product and less compelling space to be if news is removed. Australia is the first place in the world where this is occurring, so we are literally a petri dish for this.”

“Facebook was wrong, Facebook’s actions were unnecessary, they were heavy-handed, and they will damage its reputation here in Australia.”

SAVE THE CHILDREN AUSTRALIA CEO PAUL RONALDS, in a statement:

“Save the Children has come to rely on the platform to communicate with our supporters and members of the wider Australian community. We also use Facebook as an important fundraising tool to reach generous supporters who want to support the world’s most vulnerable children.

“Every minute that our page is down is another minute our message isn’t getting out about the needs of children.”

“We are outraged that access to First Nations voices has been limited in this way. Never has our media been more vital than during a global pandemic – especially on the cusp of vaccination rollouts.

“First Nations media services are not the same as commercial outlets and should not be negatively impacted by an industry wide response to corporate interests.”

“This is UNACCEPTABLE. Demand for food relief has never been higher than during this pandemic, and one of our primary comms tools to help connect people with #foodrelief info & advice is now unavailable. Hours matter when you have nothing to eat. SORT THIS OUT!”

“This is an alarming and dangerous turn of events. Cutting off access to vital information to an entire country in the dead of the night is unconscionable.”

“There’s been a climate the last two or three years of thinking Facebook isn’t doing as good a job of looking after people as it should and I think, whether intentional or not, also blocking emergency services websites and things like that in Australia is a really bad idea in a time of bushfires and COVID.

“Facebook is 17 years old so it’s a petulant late teenager and behaving accordingly, but when you’ve got global communication as part of what happens on your platform, you don’t get to have a strop (temper tantrum).”

“So Facebook can instantly block @abcperth, @6PR, @BOM_au, @BOM_WA, AND @dfes_wa in the middle of the #bushfire season, but they can’t take down murderous gun crime videos? Incredible. Unbelievable. Unacceptable. The arrogance.”

LISA DAVIES, EDITOR OF THE SYDNEY MORNING HERALD NEWSPAPER, in a tweet:

“Well, that’s a tantrum. Facebook has exponentially increased the opportunity for misinformation, dangerous radicalism and conspiracy theories to abound on its platform.”

‘Brexit’ companies shift to the Netherlands as uncertainty persists