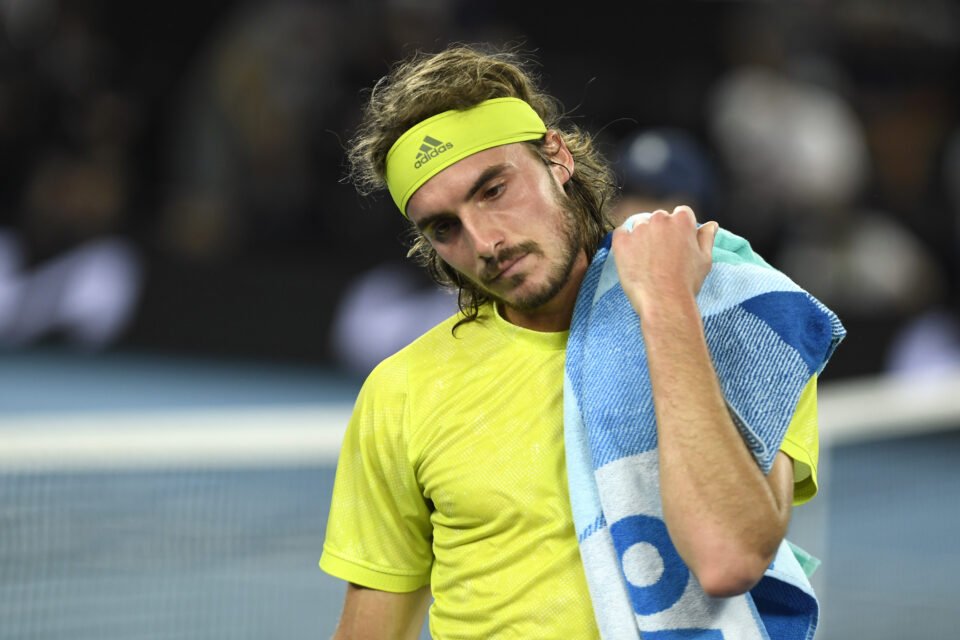 Stefanos Tsitsipas after his semi final match against Daniil Medvedev

Stefanos Tsitsipas said he would not be surprised if Daniil Medvedev beat Novak Djokovic to win the Australian Open title on Sunday and that victory for the Russian would be good for men’s tennis.

The ‘Big Three’ of the men’s game — Roger Federer, Rafa Nadal and Djokovic — have shared 57 Grand Slam titles between them and Dominic Thiem’s U.S. Open triumph last year was the first time anyone outside the triumvirate had won a major since Stan Wawrinka won in New York in 2016.

World number four Medvedev had a shot at breaking that stranglehold in the U.S. Open final in 2019 against Nadal but went down in five sets.

He will have another chance to win his first Grand Slam title on Sunday when he meets double defending champion Djokovic, a record eight-time winner at Melbourne Park.

“I wouldn’t be surprised to see Daniil win the tournament,” Tsitsipas, ranked sixth in the world, told reporters after his 6-4 6-2 7-5 defeat to Medvedev in the semi-finals.

“But, you know, it’s a strange scenario. I played Rafa here two years ago. I found his performance against me that day phenomenal. I was 100% sure he was going to win the tournament. And I ended up being wrong.

“Who knows? I don’t know. Like, Djokovic is playing well too. Look, I’m not a betting website. I don’t know what to say. Might be Medvedev, would be good for him, good for tennis.

“Why not? I mean, one sees Rafa, Novak, Roger in the Grand Slam victories, so, you know, spice it up a little bit, change the name list. Wouldn’t be bad.”

Tsitsipas rallied to a brilliant win from two sets down against Nadal in the quarter-finals but was not ready to blame fatigue for his loss to Medvedev.

He was more interested in giving credit to the ATP Finals winner, who has now won 20 straight matches.

“Let me tell you that he’s a player who has unlocked pretty much everything in the game. It’s like he’s reading the game really well,” the 22-year-old Tsitsipas said.

“So he makes it very difficult, and I’m sure all the hard work that he has been putting (in) and the hours on the court have benefited a lot. He tricks you. You know, he plays the game really smart. It’s really interesting to see that.”

It was the third semi-final loss for the Greek and he cannot wait to get past that hurdle.

“I have been waiting for that. I have learned a lot; had a lot of learning experience from those three matches,” Tsitsipas said. “I don’t know. It’s a shame.

“You come so close, you work so hard, and everyone is dreaming of a Grand Slam victory.”